"Our Military Is Waiting For You"; Trump Warns Caravan As 5,000 Troops Sent To Southern Border


The US military will deploy 5,000 troops to the southern border - up from initial estimates of 800, according to the Wall street Journal, citing US officials. The troops will be sent to Texas, Arizona and California as Central American migrant caravan makes its way north through Mexico.

On Monday, President Trump warned the caravan, tweeting: "Many Gang Members and some very bad people are mixed into the Caravan heading to our Southern Border. This is an invasion of our Country and our Military is waiting for you!"

Donald J. Trump✔@realDonaldTrump
Many Gang Members and some very bad people are mixed into the Caravan heading to our Southern Border. Please go back, you will not be admitted into the United States unless you go through the legal process. This is an invasion of our Country and our Military is waiting for you! 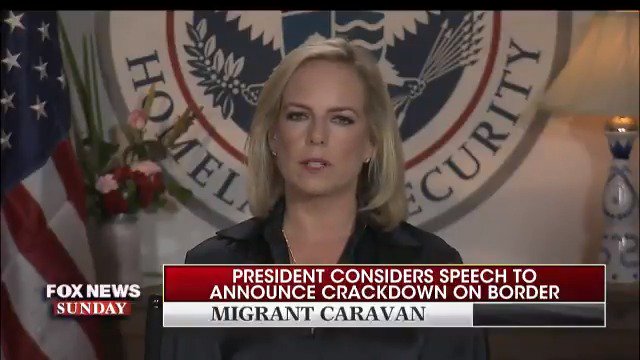 Cassandra Payne@CassieMAGA2016
RT RealSaavedra: DHS Secretary Kirstjen Nielsen: "My general message to this caravan is do not come. You will not be allowed in."

Twitter Ads info and privacy
On Sunday night, Fox News initially reported that just 800 soldiers would be deployed to the border to provide "logistical support," which includes providing vehicles and tents for the Border Patrol.

The caravan of roughly 7,200 migrants is around 1,000 miles from the closest US border crossing, and is becoming yet another flashpoint over President Trump's immigration policy less than two weeks before the key November 6 midterm elections. According to Fox, the group is traveling at around 30 miles per day since leaving Honduras.

Vice President Mike Pence warned this weekend that the caravan was being funded by outside, leftist groups, citing intelligence he says was provided by foreign partners along with a telephone call with the President of Honduras.

"What the president of Honduras told me is that the caravan was organized by leftist organizations, political activists within Honduras, and he said it was being funded by outside groups, and even from Venezuela," Pence told Fox News in an interview late Friday in Yuma, Arizona. "So the American people, I think, see through this – they understand this is not a spontaneous caravan of vulnerable people." -Fox News

President Trump, meanwhile, has levied harsh criticism at Honduras, Guatemala and El Salvador for not stopping the caravan, and even threatened to cut off aid last week in retaliation. Trump has also claimed that "criminals and unknown Middle Easterners" are among the migrants, while Homeland Security said last week that "gang members" and those with "significant criminal histories" are also traveling with the caravan

FOX just interviewed a member of the caravan that admitted he was a convicted murderer and is traveling with the mob to come back into the United States!

This is who the radical left wants in your Country. VOTE THEM OUT NOVEMBER 6Th!#VoteRed #NoSocialism #MAGA

Twitter Ads info and privacy
Over 100 Mexican officers allowed the caravan to cross a bridge they had barricaded following outrage from Mexico's National Human Rights Commission, which told police that the rural stretch of highway they were blocking had no shade, toilets or water for the migrants.

Police boarded buses and headed further down the highway, while migrants cheered and vowed to trek all the way to the U.S. border.

Mexican President Enrique Pena Nieto launched a program on Friday dubbed "You are home," which promises shelter, medical attention, schooling and jobs to Central Americans who agree to stay in the southern Mexico states of Chiapas or Oaxaca.

Police commissioner Benjamin Grajeda said that authorities only blocked the highway Saturday to tell people about the government's offer. "Here in this truck right now you can get help," he said. -Fox News

Thousands of migrants rejected Mexico's offer for asylum Friday night, however some said they were willing to discuss the issue once they reach Mexico City. If those discussions don't result in the caravan stopping, US forces await at the border.