America prepares for war in the Arctic


Is NATO Preparing For War In The Arctic? 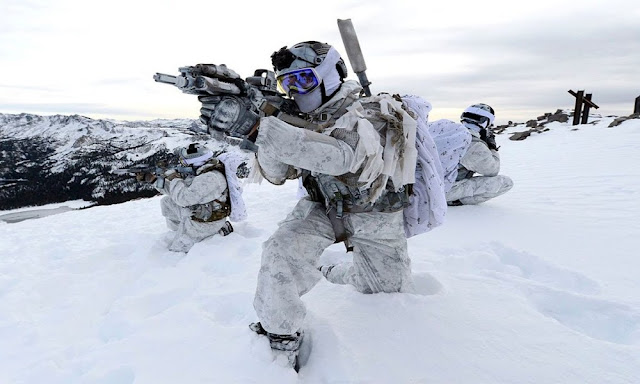 Authored by Brian Cloughley via Counterpunch.org,

Britain’s Daily Mail is a strident rag that is bought daily by over a million people who agree with its stance that most foreigners are inferior to Brits. Two years ago the European Commission against Racism and Intolerance reported that the Mail and some other papers indulged in “offensive, discriminatory and provocative terminology”, and the Commission’s chairman observed that “the Brexit referendum seems to have led to a further rise in ‘anti-foreigner’ sentiment”.

The highly-respected Economist noted that “unsurprisingly, the Daily Mail spreads more EU-linked lies than anyone else” and that its website “garners 225 million visitors each month”, which is amazing and disturbing, given its campaigns of bigotry and intolerance.

The Mail knows its readers and tells them what they want to hear, and one of its targets is Russia, which it regularly maligns and berates.

On October 23 a main story noted approvingly that on October 25 “some 50,000 troops will kick off NATO’s biggest military exercises since the Cold War in Norway, a massive show of force that has already rankled neighboring Russia. Trident Juncture 18, which runs until November 7, is aimed at training the Alliance to mobilize quickly to defend an ally under attack.” The US 6th Fleet stated that among other major deployments for the maneuvers, the aircraft carrier Harry S Truman and guided missile destroyers of the Eighth Carrier Strike Group moved in to dominate the Norwegian Sea for the first time since 1991.

According to US Air Forces Europe, Trident Juncture is partially funded by the European Deterrence Initiative, and US F-16 strike aircraft and KC-135 Stratotankers have deployed to operate from an air base in neutral, non-NATO Sweden.

This all fits in with the British government’s line that Russia is a threat to the United Kingdom, which is a farcical contention, but serves to whip up patriotic fervor, which wins votes and sells newspapers.

In June 2018 London’s Sun newspaper carried the headline “Britain will send RAF Typhoon fighter jets to Iceland in bid to tackle Russian aggression” and since then the UK’s defense minister, Gavin Williamson, has maintained that “the Kremlin continues to challenge us in every domain.”  (Williamson is the man who declared in March 2018 that “Frankly Russia should go away — it should shut up,” which was one of the most juvenile public utterances of recent years.)

It was reported on September 29 that Williamson was concerned about “growing Russian aggression ‘in our back yard’,” and that the Government was drawing up a “defense Arctic strategy” with 800 commandos being deployed to a new base in Norway. In an interview “Mr Williamson highlighted Russia’s re-opening of Soviet-era bases and ‘increased tempo’ of submarine activity as evidence that Britain needed to ‘demonstrate we’re there’ and ‘protect our interests’.”

Mr Williamson has not indicated what “interests” the United Kingdom could have in the Arctic region, where it has no territory.

The eight countries with territory north of the Arctic Circle are Canada, Denmark, Finland, Iceland, Norway, Russia, Sweden and the United States. They have legitimate interests in the region which is twice the area of the US and Canada combined.  But Britain has not one single claim to the Arctic. Not even a tenuous one like Iceland’s, which is based on the fact that the Arctic Circle passes through Grimsey Island, about 25 kilometers north of Iceland’s north coast.  Britain’s Shetland Islands, its northernmost land, are 713 kilometers (443 miles) south of the Arctic Circle.

So why does the UK declare that it has “interests” in the Arctic and that the region is “in our back yard”?  How can it possibly feel threatened?

The Arctic Institute observed in February 2018 that Russia’s “newer Arctic strategy papers focus on preventing smuggling, terrorism, and illegal immigration instead of balancing military power with NATO. These priorities suggest that Russia’s security aims in the Arctic have to do with safeguarding the Arctic as a strategic resource base . . . In general, the government-approved documents seem to have moved from an assertive tone that highlights Russia’s rivalry with NATO to a less abrasive tone based on securing economic development.”

And economic development is what it’s all about. On September 28 it was reported that “a Danish-flagged cargo ship successfully passed through the Russian Arctic in a trial voyage showing that melting sea ice could potentially open a new trade route from Europe to east Asia.”  It is obviously in the best economic interests of the European Union and Russia that the route be developed for commercial transit. To do this requires avoidance of conflict in the region.

In January China described its Arctic strategy, “pledging to work more closely with Moscow in particular to create an Arctic maritime counterpart — a ‘Polar Silk Road’ — to its ‘one belt, one road’ overland trade route to Europe. Both the Kremlin and Beijing have repeatedly stated that their ambitions are primarily commercial and environmental, not military.”  It couldn’t be plainer that Russia and China want the Arctic to be a profitable mercantile trade route, while continuing exploration for oil, gas and mineral deposits.

As pointed out by Sabena Siddiqi in the Asian Times, “Having a major stake in the Yamal liquefied natural gas project in Russia, which would supply nearly four million tonnes of LNG per annum, development of these regions makes sense for China as well, and its interests converge with Russia’s. Once the Arctic route is fully operational, the Yamal project can double Russia’s share of the global LNG market. The Arctic thawing has also given Russia greater access to minerals and other valuable resources in this region.”

Guess who doesn’t want Russia and China to prosper?

To develop the Arctic requires peace and stability.  It would be impossible to reap the benefits of the new sea-route and potentially enormous energy and mineral riches if there were to be conflict. It is obviously in the best interests of Russia and China that there be tranquility rather than military confrontation.

But Britain’s Defence Minister insists there must be a military build-up by the UK in the Arctic “If we want to be protecting our interests in what is effectively our own back yard.” He is backed by the Parliament’s Defence Committee which states that “NATO’s renewed focus on the North Atlantic is welcome and the Government should be congratulated on the leadership the UK has shown on this issue.”

NATO is always on the lookout for excuses to indulge in military action (such as its nine–month aerial blitz that destroyed Libya), and its Arctic-focused Trident Juncture is yet another confrontational military fandango designed to ramp up tension.

The US-NATO military alliance is  preparing for war in the Arctic, and is deliberately provoking Russia by conducting massive hi-tech maneuvers ever-closer to its borders. But the Pentagon and its sub-office in Brussels had better be very careful.