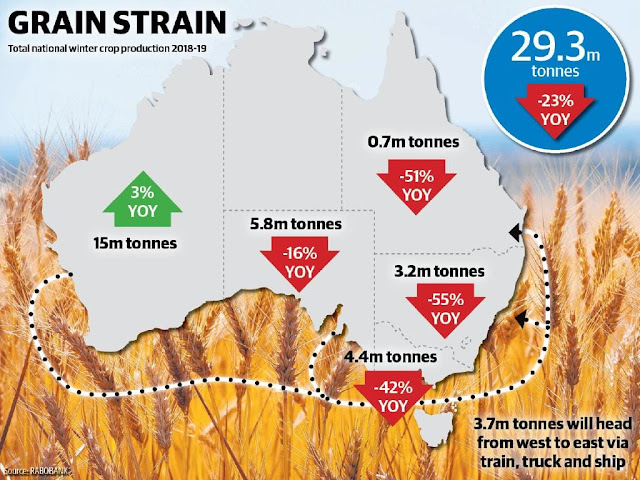 DROUGHT conditions rivalling the millennium drought will see little to no harvest for vast swathes of Australia’s east coast, according to a new report.

National winter crop production will drop 31 per cent below the five-year average, according to the report, with no harvest expected for vast regions of the east coast.

The report also predicted crops taken to harvest may suffer estimated yield losses of 30-50 per cent compared to the average.

The report credited late to no rain at sowing, below average rainfall during the growing season, and above-average temperatures, coupled with damaging frost, for the reduction of harvest quantity and grain quality.

“If not for harvest prospects of Western Australia — the only state where production is up 3 per cent year on year — Australia would be facing its lowest crop production in the last 20 years,” the report said.

The report was published just days after the first grain deliveries were made to West Australian and South Australian ports.

Of the four port zones operated by CBH Group in WA, three of them — including Geraldton — have received the first grain deliveries of the season.

In the Kwinana zone the first load of about 16 tonnes of feed barley was received at the Koorda receival site, while Albany is yet to receive any deliveries for the season.

Viterra in South Australia received its first load of grain for the season, with a load of H2 wheat delivered into Port Pirie.