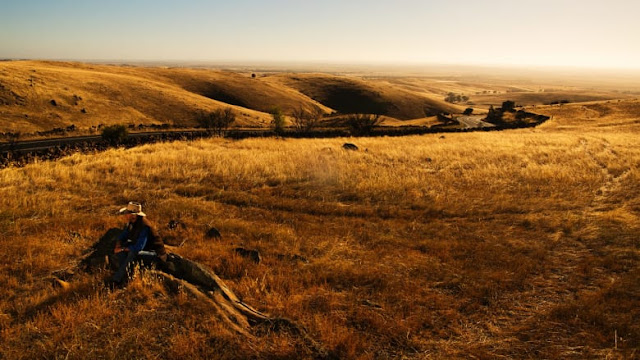 The amount of Australian farm land owned by Chinese interests has surged tenfold in the past year, climbing above 14 million hectares or 2.5 per cent of all agricultural land.

The findings from the Australian Tax Office's Agricultural Land Register, released this week, show the UK and China are the largest owners of foreign-held land in Australia, owning 27 per cent and 25 per cent respectively.

Here what the Treasurer has to say after Australia secured the world record for the longest period of uninterrupted economic growth.

Foreigners now own up to a quarter of all agricultural land in the Northern Territory and Tasmania, and 14 per cent of all farms across the country.

In NSW and Victoria, foreign interests own more than 3 million hectares. In Queensland it is six times that, with more than 17 million hectares in the state now owned by other countries through cattle stations, crops and abattoirs.

In the Northern Territory, 75 properties now own more than 13 million hectares, among them Yiang Xiang Assets' 205,000-hectare Elizabeth Downs station.

But concerns remain over the accuracy of the system which relies on individuals to self-register and imposes only a $9000 fine on those who fail to do so.

In November, Fairfax Media revealed the amount of agricultural land owned by Chinese interests had soared above 3 million hectares, more than double the 1.46 million declared by the Australian Taxation Office at the time.

The register now shows a figure 10 times that amount and appears to take into account a series of significant sales in Western Australia in 2016 and a pair of 700,000-hectare properties owned by Chinese ball bearing billionaire Xingfa Ma – part of a rush of Chinese investors into the market.

The update has meant China has jumped from fifth largest foreign land-holding country – behind Britain, the US, the Netherlands and Singapore – to second.

"The Turnbull government understands that trade and foreign investment creates jobs for Australians," he said.

"At the same time, the Turnbull government has taken consistent and determined action when it comes to ensuring foreign investment is not contrary to the national interest."

In 2016, Mr Morrison blocked a $370 million bid from Australian Rural Capital and China-based Dakang Australia Holdings on S. Kidman and Co's cattle properties which make up 1.3 per cent of the Australian continent and 2.5 per cent of Australia's current agricultural land.

The Treasurer had earlier rejected another bid on the huge tract of land by Chinese company Pengxin Group.

Mr Morrison said the potential acquisition of an 80 per cent interest in the land by a foreign company was "contrary to the national interest".

In December, Mr Morrison approved the sale of the cattle empire to mining magnate Gina Rinehart and a Chinese company.

Prof. Clive Hamilton has previously been known for his contribution to the discussion on climate change and geoengineering.


China’s influence operations have become a growing concern among liberal-democratic countries around the world. Australia has been at the forefront of such efforts, with reports of China’s massive cash donations to political parties, mobilization of student associations on campuses, monitoring of Chinese nationals, including students, and efforts to control the national discussion through media partnerships, Confucius Institutes, and funding of academic centres.

Yet Australia is not alone. Other countries have also found themselves targeted by the Chinese government – from New Zealand to the United States to Canada.

To shed light on the dangers posed by Chinese influence operations, we hosted a special event that will feature a keynote address by Clive Hamilton, Professor of Public Ethics at Charles Sturt University in Australia. Dr. Hamilton is the author of Silent Invasion: China's influence in Australia, which was published by Hardie Grant after three other publishers pulled out citing fear of punishment from Beijing.
Posted by seemorerocks at 14:52