An assessment of the immigrant caravan
Seemorerocks 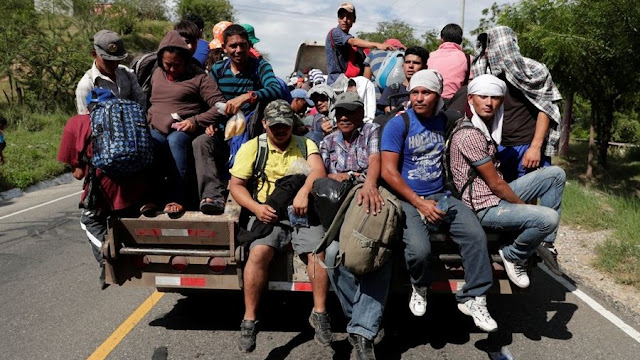 I feel the need to try and clear my head because I have a moral dilemma which has come from the "migrant caravan" heading for the United States.

In days gone by things were simpler.

I was all in favour of social progress. I was a member of the Green Party which had an (almost) consistent on issues that concerned me - such as imperialist wars, "trade" agreements such as the TPPA, exploitation, and above all, environmental issues such as genetic engineering and climate change.

This was before identity politics and #MeToo,along with other memes, raised their heads.

The first break with the past was my introduction to the Peak Oil movement and to economic, financial, social and political collapse. Becoming familiar with Michael Ruppert and others such as Dmitry Orlov, James Howard Kunstler and others were instrumental in my assessment of the way the world works.

Next, through my exposure to the work of Guy McPherson and others I was brought back to the whole question of climate change that I had left behind after the shock of COP15 in Copenhagen and the realisation that nobody was interested in taking real action that would indicate that we were getting on top of the "problem".

I was introduced by Guy primarily, to some home truths about the methane clathrate bomb, the melting Arctic, positive feedbacks and to the effects on human and other animal habitat to rapid climate change to which they could not adapt.

Just a short time ago we were a community and could agree on many things and discuss them on social media.

However,I can identify events that have cut through the community and cut it more or less in two.

Firstly, we had the fomenting of war against Syria (something that at the beginning of 2014) Mike Ruppert seemed unaware) and regime change in Ukraine followed by the annexation of Crimea and Russia's life-changing entry into the Syrian war

Then in 2016 we had the deeply divisive election in the United States and the onset of the Donald Trump era.

Indications of the fault line is illustrated by the fact that of the two that participated in that last broadcast of Mike Ruppert made shortly before he ended his own life one went from what I might call the 9/11 Truth movement and collapse to being what I would call a Hillary Clinton Democrat while the other went on (I think) to be involved in Antifa in Portland,Oregon.

Suddenly I discovered that the people I look up to because of their analysis of the world  were right-wing if not fascist, white supremacists Putin trolls in the main. To join an abrupt climate Facebook page people were made to answer questions such as "what is you attitude to LGBTQ" and prove their liberal, progressive credentials,

Quite what this has to do with abrupt climate change has always eluded me.

Whoever we are, and whatever our political views are, we are all going extinct aren't we.

Political correctness, which has never bothered me in the slightest has raised its ugly head and their is no end of vitriolic anger from liberals whose comfortable lives have been turned upside down by what they take to be Trump when he is nothing more than a reflection of the shadow that has taken over the once-mighty Untied States now that its right to rule over the entirety of humanity is being questioned all around the globe.

From "liberal-minded", reasonable people who used to be critics of so much of corporate capitalism are now supporters of the FBI/CIA etc.which they used to hate, supporters of "humanitarian" wars fought against regimes the corporate state does not like, supporters of eviscerating the US Constitution - anything that would undermine the Great Satan.  These people have gone from being advocates of Free Speech to discovering the "limitations" of free speech.

Turns out these people have lost their minds along with their comfortable lives and it is more about having the "right" view than anything else.

One part of this is the assumption that we all need to be great humanitarians and open our borders to large numbers of migrants.

Even questioning this opens one to accusations of being fascist, nazi, white supremacist or any other epithet people can dream up.

Throughout my life I have never had a thought of restricting migration and was always supportive of people coming to my country to make a new life, especially if they were refugees. I can think of various waves - they have all made a point of integrating into New Zealand while maintaining their own cultures.

The following article provide a reasonable background into the origins of this:

Stop saying migrant caravan: they're asylum seekers escaping a conflict the US created

This is the central point in liberal analysis:

There is no migrant crisis.


There is, however, a refugee crisis. That crisis is the effect of at least a half-century (and, arguably, twice that) of calamitous US political intervention in Central America, and not — as President Trump would have us believe — the inevitable byproduct of “bad hombres” who may as well be “animals.”

No doubt about it: the narrative that the USA is a magnanimous country providing wonderful opportunities to people who want to come to the States to "get something for nothing" does not stand up to scrutiny.

However, does it follow from the history of US intervention in Honduras and other Central American cultures that the 8,000- 14,000 + people on their way to America are all refugees from a despotic regime?

Evidence, as opposed to sentiment indicates that it does not.

We are told, for example that immigration caravans are a tradition,something that occurs every year, so there is nothing to worry about here. What you are not told is that such caravans consist of no more than a few hundred people and often peeter out before they reach the border.
This consists of somewhere between 8,000 and 22,000 (depending on who you believe.
This is not like the spontaneous movement of small groups of people across the desert of Mexico (often to die en route). Think of the logistics. How are you going to provide for food, shelter and other needs for this number of people.  It would take a lot of logistical report.
Think of groups consisting of strong men, women and children. It is 1,500 miles from the southern border to the US border." 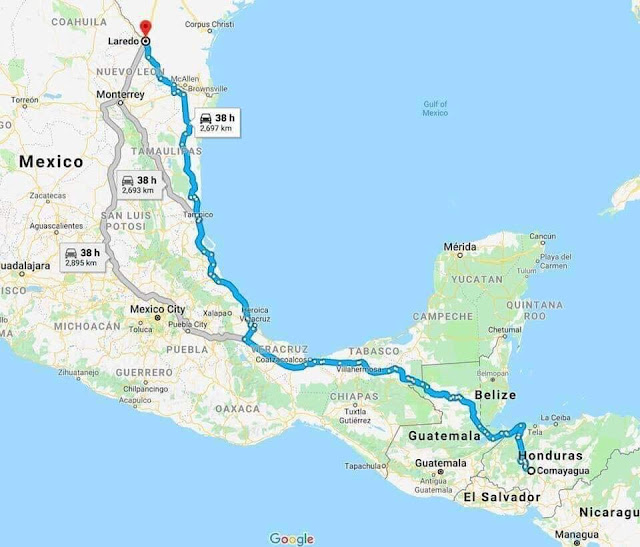 "All of a sudden , thousands of Guatemalans/Honduran’s decided to walk 1,500 miles !!! Buy a back-pack, arrange for food for 12,000 meals every day for 2 months, Get money for travel expenses, have drinking water for 4,000 people every day X 60 ( that's 720,000 meals for the trip), get directions for the best route to take, have extra clothes and sanitary items, have medical care available, prepare for rainy days get 4,000 sleeping bags!! If they can cover 25 miles every day, it will take them 60 days to cover 1,500 miles. And they all decided to do this all of a sudden, all at once and they would arrive in the USA just in time for our election. What an amazing event. Let this sink in."
I believe we have the answer. Not all the people on the caravan are walking. There have been numerous reports of trucks transporting migrants including one truck photographed with its Texas registration.

Have a look at the video below. Most of the people on the back of the truck are fit young men.  Indeed it has been reported that up to 80 percent of those on the Caravan are fit, young and male.  There have have been reports of people being observed giving out money to the participants. 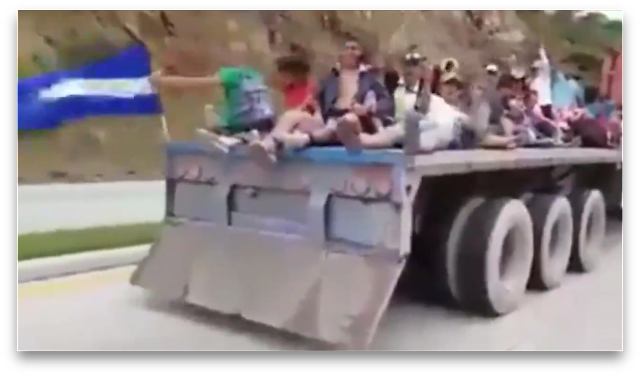 https://twitter.com/JacobAWohl/status/1054607935488253952?fbclid=IwAR08HyfVC-HXfGBbxK-4VIC7yq3ZqKiIkM_LzeTEENIGJaJHOAVMOFMdfUU
The media reports I have seen have all said (without any evidence as usual) that the participants are escaping violence and seeking refuge. Yet in those view examples I have seen of people interviewed they say they want jobs and the "good life".

There have been reports of people of other nationalities and even reports of ISIS members joining the caravan although this is laughed at by the lamestream media.

It looks to me that it is not just young men from Honduras and elsewhere in Latin America (not, however Nicaragua - that seemingly, is an exception.

That is the very definition of an economic migrant.
Every state has the sovereign right to decide for itself who it is going to let cross its borders based on its own national self-interests.

Illegal immigration probably suits the interests of some who bring Mexicans across the border illegally to work as slaves on the farms etc. of the United States. Meanwhile, in a story that is common across the world ordinary Americans are struggling day-to-day to stay above water while they see these migrants given the welfare money that they are refused.

When 22,000 or more people force their way across the border what are the logistics of this? That's probably 22,000 people that go immediately onto welfare.

In their fight with the Republicans and Trump over this the liberals are quite happy to see this situation. They are reportedly also happy to give illegals the immediate right to vote.

What group of immigrants, especially illegal ones, are immediately given the rights of citizens on arriving in the country?

That in a nutshell is that.

In normal circumstances I would be in favour of a humanitarian response to a real problem.  However, these are far from "normal" times. Not only do we have the rapid breakdown of most of the countries of the world so that their citizens  are having to do with less-and-less.  We also have abrupt climate change and all the wars.

We are being told every day by the media to react in an emotional way and say "of course we have to take these people in" whether or not there's a hundred people in need or a million (as in Europe). Of course we need globalism and open borders even if it is at the expense of the citizens who can't afford the extras because they are struggling day-to-day to stay afloat.

I have tried to deal with the facts only and the ethical side of this. The political question of how this is directed completely at Donald Trump as part of a kind of "October surprise" so he is damned if he does and damned if he doesn't  is dealt with elsewhere.

In short, I have had to modify my assumptions over many things and now I am having to do say with this question largely because I think that ideological positions are not helpful in our predicament and we need to see the facts as they are.