The human army headed for the United States

An army of 60,000+ headed for the Tijuana-California border? 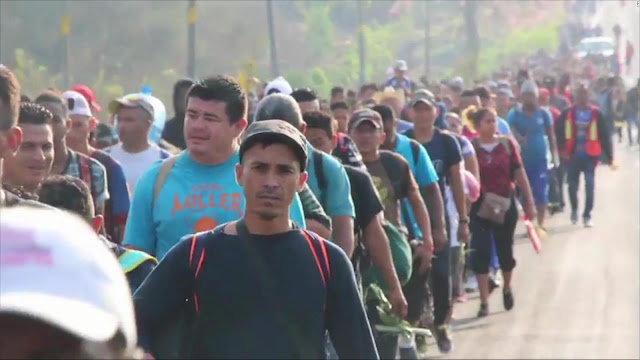 Today on his radio show Hal Turner dropped a bombshell.. Citing intelligence sources he is saying there are 22,500 migrants on their way
(not 14,000 let alone 1,000 or 5,000!)) to be augmented by 40,000 Mexicans and they tend to fight their way across the border from Tijuana to Southern California California. In addition he is claiming that there are people willing to fire at police and law enforcement from inside California.

Meanwhile I am informed that Jeff Rense on his radio station has said there are two groups – one headed for Texas, the other for California.


Mexicans are getting angry at Migrants protesting US laws - while violating Mexican laws to do so!


So I’m reading through Mexican twitters - since they are the only ones you can believe.

Seems many are already fed up with the migrants.

They are angry that migrants are not only disresding Mexican laws totally. But that they are ALLOWED TO DO IT when Mexican citizens are not allowed the privilege.

They are angry at the trash they leave.

They are angry at the money and care they are receiving when people in their own country don’t have much.

Things are going to get ugly down there I bet.

Video out of Mexico today shows an AMERICAN TRUCKING COMPANY using it's flatbed trailers to carry hundreds of illegal alien "migrants" toward the US Border to aid and abet their illegal entry into the United States!

In the video, shown below, a truck pulling dual flatbed trailers with the company name "Javier" is shown along with its US Department of Transportation (DOT) ID number.
The video below shows the truck hauling the illegal aliens, and we used it to look up the owner info of the Trucking company . . .

Here is the truck:

Here is the Company information for that DOT registration number:

When the company was called via phone at the number shown above and asked why their trucks were in Mexico aiding and abetting Illegal aliens trying to invade our country, the female who answered the phone stuttered and hung up.

Here is the video of the truck aiding and abetting the transportation of illegal aliens (trying to invade the United States) in their "migrant caravan."

I often disagree with him but he usually has a good argument.

The Truth About the Honduran Caravan
Posted by seemorerocks at 13:34