First reactions to what may be a False Flag - or not. 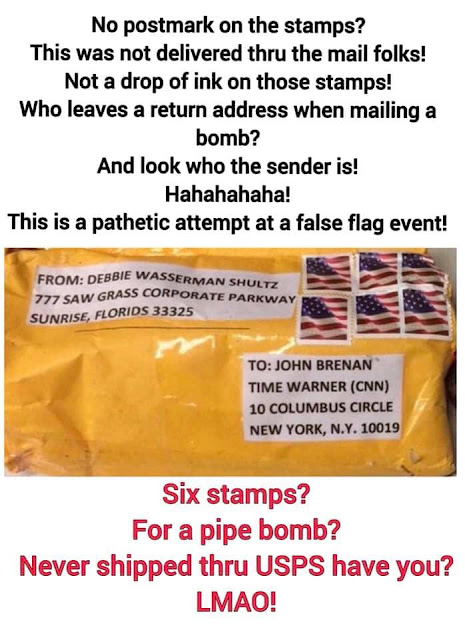 Take a look at the pkg illustrated here:

AND...that would include a tracking label / number.

Finally...a metal device would boost the weight...costing more than $3.50

Explosive devices came with a warning
Meanwhile Hal Turner is reporting the following:

The bombs sent to the Clinton home in Chappaqua, NY (Westchester County) and to the office of Barack Obama in Washington, DC, were almost identical to another bomb sent to the New York home of billionaire troublemaker, George Soros last week.

But the bombs sent to the Clintons and to Obama allegedly contained NOTES, presumably to law enforcement. The notes allegedly say:

"You have had two years to bring the liberals to justice for the crimes they committed against our Republic. You have failed to apply the law.


Some of us are not distracted by the bread and circuses you put out to distract and mollify the general public.


Some of us see through the phony Congressional Hearings about the fraudulent Russia collusion scandal, and realize the entire purpose of those hearings is to run out the clock on the Statute of Limitations so none of the perpetrators can ever be brought to justice.


From the Uranium One sale of our national security Uranium production to Russia, to fomenting the overthrow of the Ukrainian government, to the gun running operation in the US Embassy in Benghazi which spawned the deadly attack upon the Embassy, to the illegal proxy war in Syria for a gas pipeline from Qatar to Europe, to the bribing of Iran with over a Billion dollars, to the totally phony Russia-Collusion claims in order to cover-up the unlawful spying upon - and destabilizing of - our incoming President, liberals have intentionally torn our nation apart. Justice is required.


Some of us will wait no longer. If the radical, communist, liberals will not be brought to justice, then justice will be brought to them.
Forensic analysis of bomb device X-rays taken at the Soros Bomb site indicate the bombs were NEVER INTENDED to actually explode!

They contained all the elements necessary to make a functioning bomb, but the elements seemed deliberately installed in a manner to make certain the devices did NOT explode.

As such, these bombs seem to be a warning/political statement. They show the perpetrator actually knows how to make functioning devices - and thus can continue to do so - but for these particular devices, it seems the perp wanted to send a message . . . he CAN do it.

The strange thing about this is the perpetrator saying he wants the Liberals brought to justice. Bombing people is not justice.