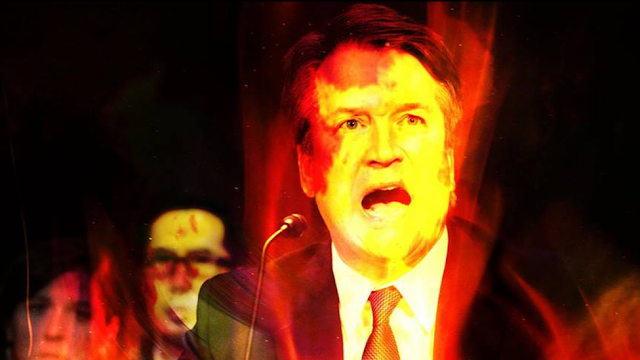 The occult turned partisan on Saturday as a coven of New York witches placed a hex on US Supreme Court Justice Brett Kavanaugh.

Dozens attended the event at Brooklyn's Catland Books, which was also streamed online.

Organisers said the event was "an act of resistance and resilience".

A Catholic priest and exorcist in California, Father Gary Thomas, planned to counter the spell by saying prayers for the justice at Mass.

"This is a conjuring of evil - not about free speech," Father Thomas told the National Catholic Register.

Dakota Bracciale, co-owner of Catland Books and one of the organisers of the event, said they would not share details or specifics of "the spells", but told the BBC the hex was "aimed at exposing Brett Kavanaugh for what he truly is, to cause him harm and see him undone".

Mr Kavanaugh's appointment to America's top court was confirmed despite him facing sexual assault allegations, something he denies.

Asked when the spells were expected to take effect or when they anticipated seeing the results, the organisers said "as soon as possible", adding: "There's not a firm timeline on these things."

They went on to say that part of its purpose was to provide "camaraderie, fellowship and support during tumultuous times".

Half of the proceeds are to be donated to charities, including the women's health group Planned Parenthood, the organisers' event page says.

Last year, Catland hosted "three consecutive rituals to hex Trump", with tickets to each of the events selling out, the owners said.

They added that press coverage of the rituals sparked a backlash, but that it was "nothing" compared with the scale of abuse following the announcement of their latest event focusing on Mr Kavanaugh.

"We have experienced a pretty severe amount of backlash in the form of hate mail and death threats," Dakota said.

However the previous rituals aimed at Mr Trump, they say, have proved successful.

"Witchcraft is a practice, not a religion," Ms Bracciale explained. "It's what one does, not what one believes."

She said that followers of witchcraft see motivation in its history: "It has always been practiced by the most downtrodden, disenfranchised and oppressed peoples who have used it as a tool for survival... to be the arbiter of their own justice since it would be denied by the powers that be.

"[We see] the witch as a political figure who threatens and works to take down the patriarchy. This has been seen throughout history, but more recently in American society.

"We uphold this legacy which merges art, political theatre, religious iconology and socio-political resistance."
Posted by seemorerocks at 16:35