Trump has killed off Democrats' hopes of a blue wave

'It's still much closer than people think, with a surprise or two in the wings'

Have we just seen our October surprise today? 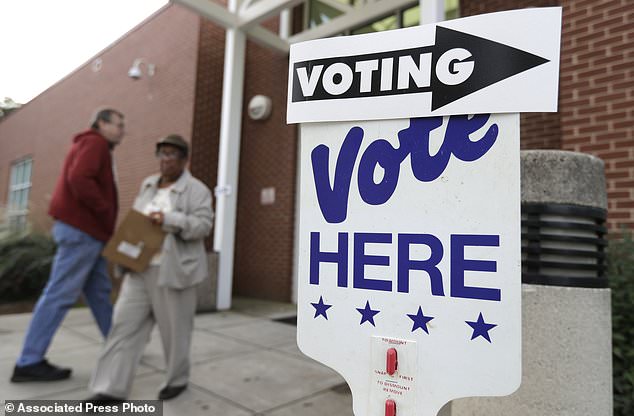 In the closing stretch of the 2018 campaign, the question is no longer the size of the Democratic wave. It's whether there will be a wave at all.

Top operatives in both political parties concede that Democrats' narrow path to the Senate majority has essentially disappeared, a casualty of surging Republican enthusiasm across GOP strongholds. At the same time, leading Democrats now fear the battle for the House majority will be decided by just a handful of seats.

'It's always been an inside straight, and it still is,' Democratic pollster Paul Maslin said of Democrats' outlook in the Senate, where they need to pick up two seats while holding on to several others in Republican-leaning states to seize the majority. 'If it had been a different year, with a different map, we might have had a terrific sweep. That would be a long shot.'

While the trend may be troubling for Democrats, the evolving political landscape remains unsettled two weeks before Election Day, even with millions of votes already cast across 20 states.

There are signs that the Democrats' position in the expanding House battlefield may actually be improving.

Yet Republican candidates locked in tight races from New York to Nevada find themselves in stronger-than-expected positions because of a bump in President Donald Trump's popularity, the aftermath of a divisive Supreme Court fight and the sudden focus on a caravan of Latin American migrants making an arduous trek toward the U.S. border.

Democrats say they never assumed it would be easy.

'It's still much closer than people think, with a surprise or two in the wings,' New York's Chuck Schumer, the top Senate Democrat, told The Associated Press.

The midterm elections will decide whether Republicans maintain control of Congress for the final two years of Trump's first term.

Even if Democrats lose the Senate and win the House, they could block much of Trump's agenda and use subpoena power to investigate his many scandals.

Some in the party's far-left wing have also vowed to impeach the president, while others promise to roll back the Republican tax overhaul and expand health care coverage for all Americans.

Democrats have enjoyed an overwhelming enthusiasm advantage for much of the Trump era. They hope an explosion of early voting across states like Florida, Texas and Nevada is further proof of their enthusiasm gap.

It took voters in the Houston area less than six hours Monday to set a new opening day record for early voting during a midterm election.

And in some Florida counties, two and three times as many voters cast ballots on the first day of early voting Monday compared to four years ago.

Public and private polling, however, suggests the GOP is getting more excited as Nov. 6 approaches.

He also attributes the party's strong position on an unusual Senate map. Democrats are defending 26 seats of the 35 seats in play, including 10 in states that Trump carried in 2016. Ayres calls it 'maybe the most Republican-leaning map of our lifetimes.'

He expects the GOP to maintain the Senate majority, perhaps adding a seat or two to its current 51-49 edge. Others have begun to envision the GOP picking up as many as four or five new seats.

Democrats, meanwhile, have effectively protected their Senate candidates in states across the Midwest - Ohio, Pennsylvania, Michigan and Wisconsin - that helped give Trump the presidency in 2016. They are increasingly pessimistic about picking up any seats, however.

The Tennessee Senate contest, in particular, has shifted sharply in Republican Rep. Marsha Blackburn's direction in recent weeks, while Democratic pickup opportunities in Arizona and Nevada are now considered toss-ups. In a measure of the deep uncertainty that has defined the Trump era, only one Democratic incumbent - North Dakota's Heidi Heitkamp - is seen as most in danger of losing.

After Heitkamp, Democrats facing the greatest risk of defeat are Joe Donnelly of Indiana, Claire McCaskill of Missouri, and perhaps Bill Nelson of Florida.

Texas Democratic Senate candidate Beto O'Rourke has shattered fundraising records and developed a national following, but polls have consistently given Republican Sen. Ted Cruz a significant lead against him.

In the race for the House, both sides acknowledge the prospect of a wipeout-style wave is shrinking.

It's not that Democrats won't be able to wrestle the House majority. But Republican lawmakers are increasingly optimistic, in part because of Trump's recent performance as the GOP's campaigner in chief.

Republicans say the often-volatile president has been surprisingly on-message during his campaign events, touting the strong economy and doubling down on the Kavanaugh fight to promote his efforts to fill courts with conservative jurists.

And while Trump has been criticized by members of his own party for his handling of the case of the death of a Saudi journalist working for The Washington Post, operatives say the matter appears to be having little impact on voters.

Rep. Tom Cole, R-Okla., emerged from the call saying it's going to be a 'dogfight' to the finish.

There are signs, however, that Democrats are expanding the House battlefield as Election Day approaches.

Republicans in recent days have pumped new money into House districts held by Republicans in Florida, Georgia, Virginia and New York, suggesting they're on the defensive. Already, Democrats invested in nearly 80 races, including more than a dozen legitimate pickup opportunities in districts Trump carried by at least 9 points.

Democrats need a net gain of 23 seats to claim the House majority.

The massive battlefield remains a problem for Republicans, who have struggled to match Democratic fundraising and face several first-time candidates not yet tainted by Washington.

Still, Dan Sena, the executive director of the House Democrats campaign arm, recently predicted Democrats would win the majority by only two seats.

The Republican shift is not playing out as planned.

The GOP hoped its tax cuts would fuel their midterm message. After they proved unpopular, Republicans largely abandoned their most significant policy achievement in the Trump era in favor of a more familiar message of anger and fear.

The super PAC aligned with House Speaker Paul Ryan, which is expected to spend $100 million before Election Day - most of it on attack ads - highlighted the shifting landscape in a memo to donors.

'The polling momentum that began with the Supreme Court confirmation hearings has continued, and the environment has continued to improve,' wrote Corry Bliss, executive director of the Congressional Leadership Fund. Still, he wrote, '20 races that will decide the majority remain a coin-flip.'