I find it a disgrace that this article appeared, written by a NZ academic, had to be published in an Australian publication.

This debate should be happening here but everything is so closed-down one dare not mention it in certain circles.

I believe that the government has conspired with the National Party and the media to close down the conversation that was opened up by Jami-Lee Ross’ revelations. 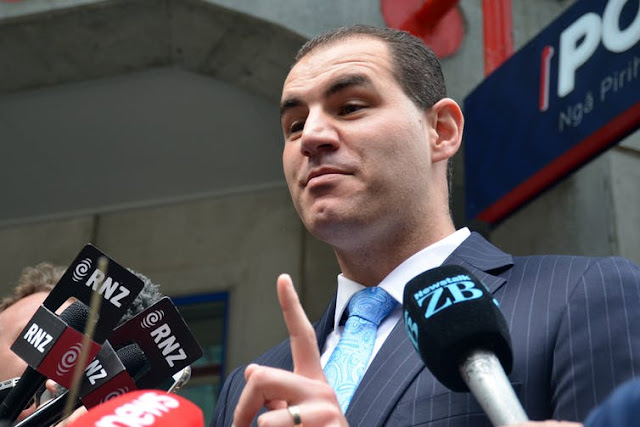 New Zealand’s opposition National Party is embroiled in a rolling controversy that erupted last week when former National MP and senior whip Jami-Lee Ross accused his leader Simon Bridges of corruption. Bridges has vehemently denied these accusations, and the evidence released does not support any allegations of illegality.

The discussion of foreign influence in New Zealand politics plays out mostly in terms of the activities of the People’s Republic of China. The local debate was initiated by Professor Anne-Marie Brady’s “Magic weapons” paper last year. Despite her warnings that China’s foreign influence activities have the potential to undermine the sovereignty and integrity of the political system of targeted states, the dominant view among New Zealand’s main political parties might best be described as “nothing to see here, time to move on”.
Reactions in New Zealand contrast sharply with the situation in Australia, where there has been a much more open democratic debate on the issue of China’s influence, as well as law reform designed to mitigate foreign interference.
Read more: Soft power goes hard: China's economic interest in the Pacific comes with strings attached 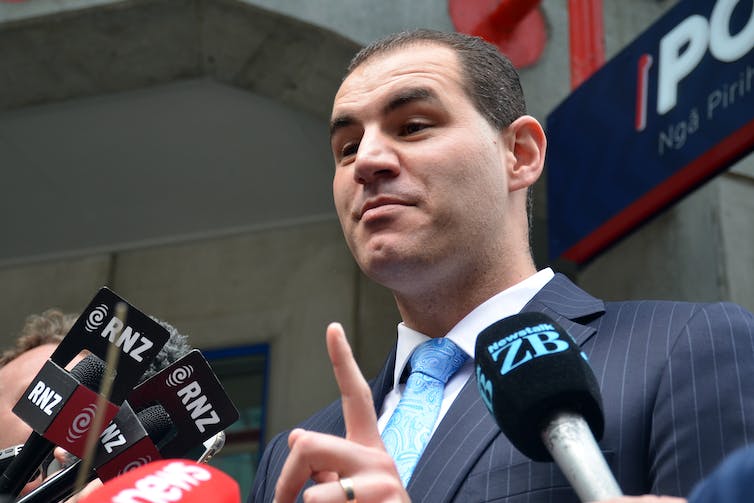 Last week, Jami-Lee Ross released a recording of a conversation he had with opposition leader Simon Bridges in June (full transcript). The transcript alleges that Zhang Yikun, a wealthy Chinese immigrant and a former member of the People’s Liberation Army with ongoing links to the Chinese state, made a donation to the National Party of $100,000. The conversation then turned to new candidates for the National party list, and the possible candidature of Colin Zheng, manager of a construction company owned by Zhang.

At a national level, there are rules under the Electoral Act 1993 regarding political donations to both candidates and to political parties. For candidates, a donor’s name and address must be reported for donations of more than $1,500. For party donations, the name and address of the donor must be reported where donations exceed $15,000.
For both candidates and parties, foreign donations (defined as from people who are not citizens or residents on the electoral roll or from incorporated or unincorporated bodies outside New Zealand) exceeding $1,500 are forbidden. Each registered political party must file an annual return of party donations with the Electoral Commission, which are then made public. In terms of party donations which hit a $30,000 threshold, a return must be filed within ten working days, as opposed to annually.
There are also restrictions on how much can be spent during a general election period, which also effectively constrain donations. Political party spending is capped at just over $1.1 million, plus $26,200 per electorate contested, for a total election spend of just under $2.7 million if all 60 electorates are contested.
Spending limits also apply to persons or groups who are not contesting the election directly but seek influence. They can spend up to $12,600 on election advertising during the regulated period without having to register with the Electoral Commission. A person or group whose spending exceeds that amount must register and they can spend a maximum of $315,000 on election advertisements.

Who raises what from whom

In 2017, National raised $4.6 million in party donations, vastly exceeding Labour’s $1.6 million, as well as busting the limits of what they could spend in that year’s election. $3.5 million of the National’s donations (76%) were anonymous under the $15,000 threshold, compared with 0.7 million of Labour’s (44%). The Green Party raised $0.8 million, with 72% under the disclosure threshold, and New Zealand First raised $0.5 million, with 84% under the threshold.
There is no requirement for political parties to report the amounts of overseas donations under $1,500. Consequently the public does not know how many foreign donations come in under that amount.
It would be easy for a foreign state to funnel money into a political party from a large number of foreign donors, all under the $1,500 threshold. Equally, if that state had access to local actors, it could funnel money into the system at amounts above or below the $15,000 threshold.
What donors get for their donations is unclear. At its least malign, donors seek to passively promote a political ideology which they consider to be beneficial. Where donations are part of developing a long-term quid pro quo relationship along multiple dimensions, donors’ and receivers’ motivations and exactly what is traded is very difficult to pin down from the outside.
Transparency International reports that New Zealand political parties are one of the weakest pillars supporting local transparency and good governance. Within this weak pillar, one of the weakest strands involves political finance and donations.
They argue that with the demise of mass political participation, parties are increasingly dependent on donations to function. This weakness means that local politicians are more likely to seek to “supply” influence, or at least dangle the prospect of influence, in front of wealthy bidders.
The “demand” to buy political influence has also risen. With the increase in worldwide inequality and kleptocracy, there are more rich people for whom buying influence is the norm. Specifically in New Zealand, there has been an influx of wealthy expatriates from China, where buying influence is an accepted practice.
They often retain close links to the Chinese Communist Party, which runs an authoritarian, anti-democratic and oppressive regime. It is thus not surprising that issues of donations and foreign influence are increasingly entering into domestic political debates.

WHAT DON'T WE KNOW ? 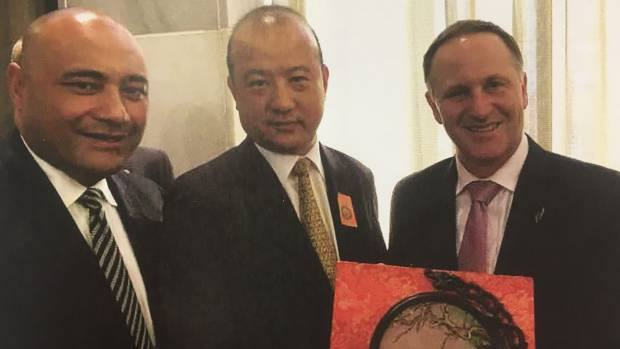 
And why is the Labour party so quiet on this matter?

In the photo, John Key is standing next to Yikun Zhang.
Mr Zhang is the gentleman in question regarding the Jami-Lee Ross 'donation' scandal, and it was Mr Zhang who received a Queens Honour from the National Party.
Mr Zhang is alleged to have given the Simon Bridges led National party a $100,000 donation with the criteria that one of his associates be considered for a job inside the National Party!

But as the photo shows Mr Zhang was also known to John Key.

So what has he donated to, or been promised by, National in the past? Donations are regularly given by the Chinese community in return for 'favours'.
So what, if anything, have the National Party done for Mr Zhang while Key and English were in charge of the treasury benches?

And why is Labour so quiet on this matter, one of the biggest political bombshells in our history.

What 'dirt' does the National Party have on Labour - if anything, that makes Jacinda Ardern and the rest of her colleagues so reluctant to criticise?

* Why have we allowed foreign investment and ownership of our housing stock when we have the greatest homeless crisis in our history?

* Why were the National party so reluctant to stop foreign ownership of our assets?

* Why is New Zealand water being sold overseas by Chinese companies who only pay a few dollars for it in New Zealand?

* Just what did Judith Collins do for her husband's business?

* And why are we flooding New Zealand with hundreds of thousands of people we can neither afford nor have room for?.

CHINA'S 100-YEAR STRATEGY FOR NEW ZEALAND AND THE SOUTH PACIFIC.... 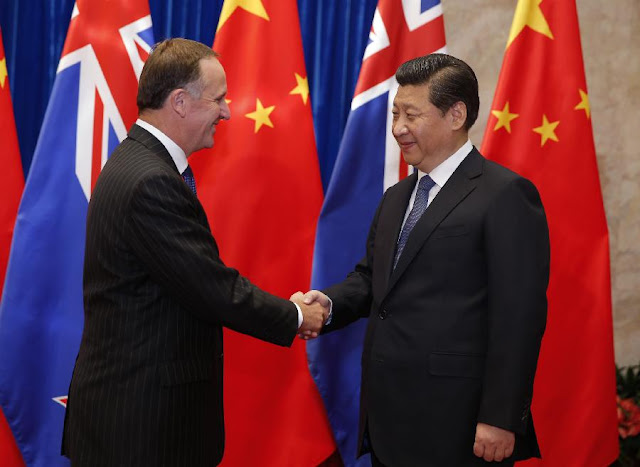 NZ News, via Facebook
While politicians in Washington may be close to civil war, some economic and political views are widely accepted across all American political parties.
Since 1993 the Clinton, Obama and Trump camps have all been in agreement when it comes to their comprehension of China's foreign policy in the South Pacific.

Earlier this year on a visit to New Zealand Ms Clinton repeated the concerns of Washington regarding China's 'soft invasion' policy of the South Pacific including New Zealand. She cited the case in Vanuatu where a wharf funded by a soft loan from the Chinese government is currently in dispute following Vanuatu's failure to honour debt obligations.
China's soft invasion policy has been operating for a number of years now to gain influence in the region. The policy seeks to attain more political influence to get better access to resources, especially fisheries and is also seen as a means of helping Chinese nationals into a better standard of living.
On two occasions between 2010 and 2016, the State Department advised John Key's National Government of their concerns regarding China's relationship and growing influence in New Zealand.
According to foreign policy experts in the US, China has a four-point plan regarding New Zealand.
1. Seek political figures whose personal aspirations are stronger than their nationalistic ones.
2. Back these Political aspirants with strong trade agreements and economic help in return for generous concessions on immigration.
3. Push for political representation by having Chinese nationals run for Council and Government positions.
4. Use the political influence to develop better agreements on trade, land and asset ownership.
In Helen Clark, China found an ally who was both anti-American and a career politician. Someone whose desire for the top job meant she could be relied upon to put the country's interests behind her own.
So in April of 2008, New Zealand became the first developed country to sign a free trade agreement with China. But the agreement was lopsided and contained very beneficial clauses with regard to immigration. It allowed for complete access to New Zealand's infrastructure like schools and hospitals without any contribution to the cost or necessary cost of upgrading.
But it wasn't until November of the same year when John Key was elected to government that significant Chinese immigration got going. Key turned out to be more pliable with a larger personal agenda than Clark.
In 2014 John Kerry US Secretary of State noted Chinese influence in New Zealand and was concerned about the long-term economic and military implications.

Knowing of Obama's relationship with the New Zealand Prime Minister he persuaded President Obama to have a private conversation with Key outlining US concerns.

As predicted John Key had no worries about the long-term implications for New Zealand, instead more concerned with his short-term desire for attention and need to retain popularity.

Both the American and Chinese governments are acutely aware of the politically and economically insouciant attitude of most New Zealanders.
While the Americans deem this to be a concern the Chinese view it as something to be taken advantage of.

( One in four Auckland residents now identify with an Asian ethnicity)