The US test-dropped a nuclear bomb

An Air Force Stealth B-2 Spirit Just Test-Dropped a Nuclear Bomb
This is what it could do in battle. 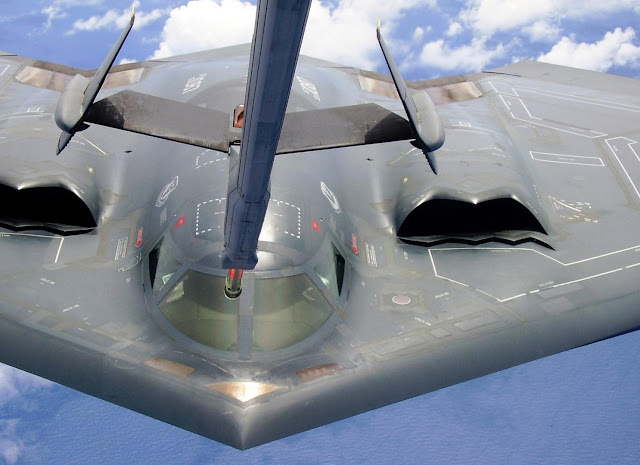 
The Air Force’s B-2 Stealth bomber has test-dropped an upgraded, multi-function B61-12 nuclear bomb which improves accuracy, integrates various attack options into a single bomb and changes the strategic landscape with regard to nuclear weapons mission possibilities.

“The updated weapon will include improved safety, security and reliability,” Cronin said.

The B61-12 adds substantial new levels of precision targeting and consolidates several different kinds of attack options into a single weapon. Instead of needing separate variants of the weapon for different functions, the B61-12 by itself allows for earth-penetrating attacks, low-yield strikes, high-yield attacks, above surface detonation and bunker-buster options.

The latest version of the B61 thermonuclear gravity bomb, which has origins as far back as the 1960s, is engineered as a low-to-medium yield strategic and tactical nuclear weapon, according to nuclearweaponsarchive.org, which also states the weapon has a “two-stage” radiation implosion design.

“The main advantage of the B61-12 is that it packs all the gravity bomb capabilities against all the targeting scenarios into one bomb. That spans from very low-yield tactical “clean” use with low fallout to more dirty attacks against underground targets,” Hans Kristensen, Director of the Nuclear Information Project, Federation of American Scientists, told Warrior Maven.

Air Force officials describe this, in part, by referring to the upgraded B61-12 as having an “All Up Round.”

“The flight test accomplished dedicated B61-12 developmental test requirements and “All Up Round” system level integration testing on the B-2,” Cronin said.

The B61 Mod 12 is engineered with a special “Tail Subassembly” to give the bomb increased accuracy, giving a new level of precision targeting using Inertial Navigation Systems, Kristensen said.

The evidence that the B61-12 can penetrate below the surface has significant implications for the types of targets that can be held at risk with the bomb.

By bringing an “earth-penetrating” component, the B61-12 vastly increases the target scope or envelope of attack. It can enable more narrowly targeted or pinpointed strikes at high-value targets underground - without causing anywhere near the same level of devastation above ground or across a wider area.
Recommended: Imagine a U.S. Air Force That Never Built the B-52 Bomber


“A nuclear weapon that detonates after penetrating the earth more efficiently transmits its explosive energy to the ground, thus is more effective at destroying deeply buried targets for a given nuclear yield. A detonation above ground, in contrast, results in a larger fraction of the explosive energy bouncing off the surface,” Kristensen explained.

The testing and integration of the B61-12 is one piece of a massive, fleet-wide B-2 upgrade designed to sustain the bomber into coming years, until large numbers of the emerging B-21 Raider are available. A range of technical modifications are also intended to prepare the 1980s-era bomber for very sophisticated, high-end modern threats.

The B-2 is getting improved digital weapons integration, new computer processing power reported to be 1,000-times faster than existing systems and next-generation sensors designed to help the aircraft avoid enemy air defenses.

One of the effort’s key modifications is designed to improve what’s called the bomber’s Defensive Management System, a technology designed to help the B-2 recognize and elude enemy air defenses, using various antennas, receivers and display processors.

The Defensive Management System is to detect signals or “signatures” emitting from ground-based anti-aircraft weapons, Air Force officials have said. Current improvements to the technology are described by Air Force developers as “the most extensive modification effort that the B-2 has attempted.”

The modernized system, called a B-2 “DMS-M” unit, consists of a replacement of legacy DMS subsystems so that the aircraft can be effective against the newest and most lethal enemy air defenses. The upgraded system integrates a suite of antennas, receivers, and displays that provide real-time intelligence information to aircrew, service officials said.

Upgrades consist of improved antennas with advanced digital electronic support measures, or ESMs along with software components designed to integrate new technologies with existing B-2 avionics, according to an Operational Test & Evaluation report from the Office of the Secretary of Defense.

The idea of the upgrade is, among other things, to inform B-2 crews about the location of enemy air defenses so that they can avoid or maneuver around high-risk areas where the aircraft is more likely to be detected or targeted. The DMS-M is used to detect radar emissions from air defenses and provide B-2 air crews with faster mission planning information - while in-flight

Air Force officials explain that while many of the details of the upgraded DMS-M unit are not available for security reasons, the improved system does allow the stealthy B-2 to operate more successfully in more high-threat, high-tech environments – referred to by Air Force strategists as highly “contested environments.”

Many experts have explained that 1980s stealth technology is known to be less effective against the best-made current and emerging air defenses – newer, more integrated systems use faster processors, digital networking and a wider-range of detection frequencies.

The DMS-M upgrade does not in any way diminish the stealth properties of the aircraft, meaning it does not alter the contours of the fuselage or change the heat signature to a degree that it would make the bomber more susceptible to enemy radar, developers said.

Many advanced air defenses use X-band radar, a high-frequency, short-wavelength signal able to deliver a high-resolution imaging radar such as that for targeting. S-band frequency, which operates from 2 to 4 GHz, is another is also used by many air defenses, among other frequencies.

X-band radar operates from 8 to 12 GHz, Synthetic Aperture Radar, or SAR, sends forward and electromagnetic "ping" before analyzing the return signal to determine shape, speed, size and location of an enemy threat. SAR paints a rendering of sorts of a given target area. X-band provides both precision tracking as well as horizon scans or searches. Stealth technology, therefore, uses certain contour configurations and radar-absorbing coating materials to confuse or thwart electromagnetic signals from air defenses

These techniques are, in many cases, engineered to work in tandem with IR (infrared) suppressors used to minimize or remove a "heat" signature detectable by air defenses' IR radar sensors. Heat coming from the exhaust or engine of an aircraft can provide air defense systems with indication that an aircraft is operating overhead. These stealth technologies are intended to allow a stealth bomber to generate little or no return radar signal, giving air dense operators an incomplete, non-existent or inaccurate representation of an object flying overhead.


Also, the B-2 is slated to fly alongside the services’ emerging B-21 Raider next-generation stealth bomber; this platform, to be ready in the mid-2020s, is said by many Air Force developers to include a new generation of stealth technologies vastly expanding the current operational ranges and abilities of existing stealth bombers. In fact, Air Force leaders have said that the B-21 will be able to hold any target in the world at risk, anytime.

The Air Force currently operates 20 B-2 bombers, with the majority of them based at Whiteman AFB in Missouri. The B-2 can reach altitudes of 50,000 feet and carry 40,000 pounds of payload, including both conventional and nuclear weapons.

The aircraft, which entered service in the 1980s, has flown missions over Iraq, Libya and Afghanistan. In fact, given its ability to fly as many as 6,000 nautical miles without need to refuel, the B-2 flew from Missouri all the way to an island off the coast of India called Diego Garcia – before launching bombing missions over Afghanistan.
Posted by seemorerocks at 16:22