Why did the Paris Agreement not specify a year for preindustrial?

Remember the Paris Agreement, when politicians pledged to take efforts to ensure that the temperature would not cross 1.5°C above preindustrial?

The image illustrates this idea and also shows that we're well above 1.5°C anthropogenic global warming. 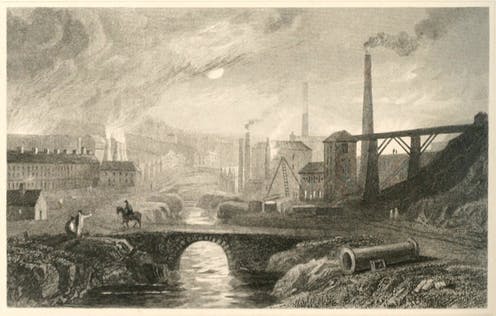 In the early days of the Industrial Revolution, no one would have thought that their burning of fossil fuels would have an almost immediate effect on the climate. But our new study, published today in Nature, reveals that warming in some regions actually began as early as the 1830s.

That is much earlier than previously thought, so our discovery redefines our understanding of when human activity began to influence our climate.
Determining when global warming began, and how quickly the planet has warmed since then, is essential for understanding how much we have altered the climate in different parts of the world. Our study helps to answer the question of whether our climate is already operating outside thresholds that are considered safe for human society and functional ecosystems.
Our findings show that warming did not develop at the same time across the planet. The tropical oceans and the Arctic were the first regions to begin warming, in the 1830s. Europe, North America and Asia followed roughly two decades later.
Surprisingly, the results show that the southern hemisphere began warming much later, with Australasia and South America starting to warm from the early 20th century. This continental-scale time lag is still evident today: while some parts of Antarctica have begun to warm, a clear warming signal over the entire continent is still not detectable.
The warming in most regions reversed what would otherwise have been a cooling trend related to high volcanic activity during the preceding centuries.
Global warming got underway much earlier in the north.


By pinpointing the date when human-induced climate change started, we can then begin to work out when the warming trend broke through the boundaries of the climate’s natural fluctuations, because it takes some decades for the global warming signal to “emerge” above the natural climate variability.
According to our evidence, in all regions except for Antarctica, we are now well and truly operating in a greenhouse-influenced world. We know this because the only climate models that can reproduce the results seen in our records of past climate are those models that factor in the effect of the carbon dioxide released into the atmosphere by humans.
These remarkable findings were pieced together from the most unusual of sources – not thermometers or satellites, but rather from natural climate archives. These include coral skeletons, ice cores, tree rings, cave deposits and ocean and lake sediment layers, all of which record the climate as they grow or accumulate.
These archives provide long records that extend back 500 years – well before the Industrial Revolution – and provide a critical baseline for the planet’s past climate, one that is impossible to obtain otherwise. 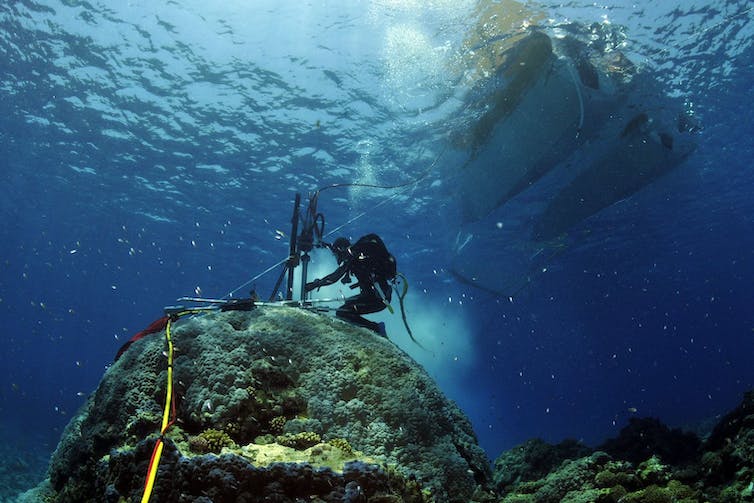 class="caption" style="margin: 0px; padding: 0px; border: 0px; outline: 0px; font-size: 11px; vertical-align: baseline; background: transparent;"Corals can help reveal the climate of centuries past, long before weather records began. Eric Matson/AIMS, Author provided
But why is there no clear warming fingerprint yet seen across Antarctica? The answer most likely lies in the vast Southern Ocean, which isolates the frozen continent from the warming happening elsewhere.
The westerly winds that circulate through the Southern Ocean around Antarctica keep warm air masses from lower latitudes at bay. Ozone depletion and rising greenhouse gas concentrations during the 20th century have also caused this wind barrier to get stronger.
The Southern Ocean currents that flow around Antarctica also tend to move warmer surface waters away from the continent, to be replaced with cold deeper water that hasn’t yet been affected by surface greenhouse warming. This process could potentially delay Antarctica’s warming by centuries.

The delay in warming observed in the rest of the southern hemisphere is something we do not yet fully understand. It could simply be because fewer records are available from the southern hemisphere, meaning that we still don’t have a full picture of what is happening.
Alternatively, like Antarctica, the southern hemisphere’s oceans could be holding back warming – partly through winds and currents, but perhaps also because of “thermal inertia”, whereby the ocean can absorb far more heat energy than the atmosphere or the land before its temperature markedly increases. Bear in mind that the southern half of the globe has much more ocean than the north.
Essentially, then, the coolness of the southern hemisphere’s vast oceans could be “insulating” Australasia and South America from the impact of global warming. The question is, for how long?
If our evidence of delayed warming in the southern hemisphere holds true, it could mean we are in in for more climate surprises as global warming begins to overcome the thermal inertia of our surrounding oceans. Could the recent record warming of Australian waters, and the subsequent damage to the Great Barrier Reef, be an early sign that this is already occurring?
Recent research suggest that the mass bleaching event of the reef was made 175 times more likely by climate change. Following the recent severity of such extremes, a better understanding of how anthropogenic greenhouse warming is already impacting the southern hemisphere is critical.

What to do about it

Leading scientists from around the world met in Geneva last week to discuss the goal of limiting average global warming to 1.5℃ – the more ambitious of the two targets enshrined in the Paris climate agreement.
Last year, global temperatures crossed the 1℃ threshold, and 2016 is on track to be 1.2-1.3℃ above our climate baseline.
But here’s the kicker. That baseline is relative to 1850–1900, when most of our thermometer-based temperature records began. What our study shows is that for many parts of the world that estimate isn’t good enough, because global warming was already under way, so the real baseline would be lower.
The small increases in greenhouse gases during the 19th century had a small effect on Earth’s temperatures, but with the longer perspective we get from our natural climate records we see that big changes occurred. These fractions of a degree of extra warming might seem insignificant at first, but as we nudge ever closer to the 1.5℃ guardrail (and potentially beyond), the past tells us that small changes matter.


The UN Paris Agreement on climate change aims to ensure increases in global temperature are less than 2°C above ‘pre-industrial’ levels, with an aspirational 1.5°C limit. However, the ‘starting line’ of the pre-industrial era is not defined by the UN agreements, or by the Intergovernmental Panel on Climate Change (IPCC).
A new analysis by an international team of researchers aims to better define the pre-industrial baseline, informing the world’s decision makers on the required limits to greenhouse gas emissions needed to meet the terms of the Paris agreement. The study concludes that 2015 was likely the first time in recorded history that global temperatures were more than 1°C above pre-industrial levels.
Posted by seemorerocks at 17:57