Graziers fear unexplained pasture dieback has become a 'creeping cancer' that's moving into some of Queensland's best cattle country, yet researchers are still clueless about what is causing it.

Ivan Naggs is a grazier and stud breeder in the south-east of the state, and is also the chairman of the AgForce weeds committee.
He said the condition, which has been identified in all tropical and subtropical sown grasses and some native grasses, is slowing devouring some of the state's best pasture.
"It's very common [and] it's widespread on the coast.
"I've visited 22 who are members of AgForce and it varies how it starts but it's wiping almost all pastures [out]," Mr Naggs said.
"I've had one dairy farmer contact me [who] milks 350 cows — he reckons he'll be gone by August at the rate it's going."

Along with reducing pasture growth, dieback makes grass unpalatable to cattle, and a range of weeds and unwanted plants often move in afterwards, causing erosion risks and the potential for pest outbreaks.

At a field day at Brian Pastures Research Station near Gayndah in the North Burnett region, graziers were told unexplained patches of dead pasture rendering paddocks useless have now been found from Mareeba in the far North, down to the southern Queensland border.
A form of dieback, which presents as yellowing of older leaves on grasses before completely killing the plant, was first reported in the state in 1993 but there has been a major increase in reported cases since 2016.
While so far the condition has been largely coastal, there is evidence the dieback is moving south and west, but researchers are still unsure what is causing the condition.

Pasture dieback is found in all subtropical and tropical grasses and there is evidence it could be moving into the south and west of Queensland.
(ABC Rural: Jennifer Nichols)
Third-generation grazier Max Richards first noticed dieback on his 100-hectare farm at Cooroy in the state's south-east in April 2017, but the condition rapidly took hold and wiped out his entire operation.
"There's not a thing left," he said.
"At Christmas time we noticed it spreading rapidly across the farm and by the third week of January it was all dead.
He has since sold most of his 70 breeders and will plant legumes, which are so far unaffected, in an effort to hold on for a cause and a cure to be discovered.
"They're running on weeds at the moment, eating weeds," Mr Richards said.
"I'm heartbroken because you don't know which way to go.
"If there was a remedy or a resistant grass or something like that you'd have an answer. You'd just go and plant that grass, but what do you do?
"We're on limited income because we've had to sell our cattle so we've really only got one chance of getting it right and if we stuff it up we are in big trouble," he said.
Mr Richards said many of his neighbours were in denial about the condition because they feared a discovery would drastically reduce the value of their property.
"I'm the third generation on that farm … we had that farm looking very nice. There was no weeds on it I was very proud of myself, now you wouldn't give two bob for it.

Over the past two years the Queensland Department of Agriculture and Fisheries has been investigating the condition, visiting farms and collecting plant and soil samples in multiple locations across the state.
Some graziers have criticised the response for being too slow, but senior pasture agronomist Stuart Buck said it had been an extremely challenging condition to categorise.
"The scale of it from an areas point of view is extensive … if it was affecting one grass type in one area we could probably much easier pinpoint what the cause is," Mr Buck said. 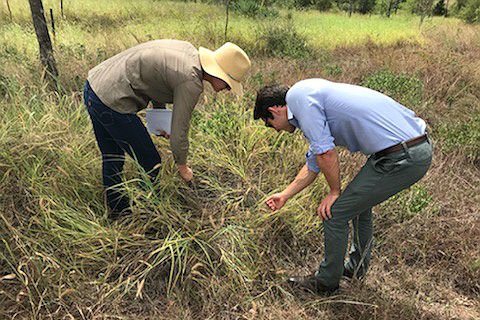 The Department is conducting two detailed trials; one diagnostic and the other a full research program investigating management options, but both only commenced recently.
Industry marketing and research body, Meat and Livestock Australia (MLA), was also leading a multi-disciplinary approach, teaming up with universities to examine everything that could be causing the condition.
MLA are exploring a range of aspects to isolate a cause of the condition, including the impact of weather, insects, nutrition, microbes, viruses, DNA, and chemicals, as well as the potential for resistant varieties.
So far there were no conclusive results, and Mr Buck said it may be a while before a remedy could be found.
"It's difficult and a concerted research effort is required across a large area. It just highlights the complexity [and] the unknowns about this condition," he said.
"Once we know what's causing it we can then more accurately do some work to identify what a producer can practically do about that issue."

Mr Buck said while research to identify the cause is still understand, depending on their circumstances, graziers should explore planting unaffected legumes as a stop-gap until a management strategy was found.
"If they can get machinery across that paddock the opportunity might be to renovate that pasture," he said.
"Either burn it or cultivate what's remaining and remove what's there and replant a forage of some sort.
"Plant a legume as a pure crop basically, no grass, because grasses are what's affected.
"In 12 or 18 months time we do want to have a grass/legume pasture long-term, there's no argument against that … hopefully by that time we'll have some better clues as to what's causing it and what should be sown back in there."


(ABC Wide Bay: Kallee Buchanan)
Some graziers have called for an extension officer to be reinstated to the region to help tackle the issue, but the state Agriculture Minister Mark Furner backed the current approach.
"At this stage both the Department and the key stakeholders are doing a sensational job in partnering with one another in terms of examining these issues and looking at alternatives of addressing them," Mr Furner said.
In the meantime the Government announced the $2.38 million three-year renewal of FutureBeef, an extension program between the Queensland, Northern Territory and Western Australian governments and MLA, focused on the northern beef industry.
"With the project being extended for another three years, it will concentrate on supporting producers in achieving sustainable and profitable productivity gains," he said.
"This will involve a revised schedule of direct engagement and education through webinars, social media campaigns, a regular eBulletin and traditional media, while in tandem the Department of Agriculture and Fisheries will be further strengthening its extension services to conduct projects with beef enterprises."


Six decades of farming, but this is Neil Barwick's first winter without a crop

Mr Barwick is a grain grower based near Tamworth in the New England region of New South Wales.
Even in the drought of the 1960s, Mr Barwick still managed to plant a crop right at the very end of the winter season when it rained, but this time he has not been as fortunate.
"I did not think I would ever see that," he said.
"This drought is just as bad, if not worse than the '65, '66 drought and even back then I was able to harvest small amount of wheat."
Mr Barwick said he knows the window for winter planting has now closed and is now looking towards the summer season, but with little soil moisture he may need to take a risk or two to get a crop in the ground.

This is the drought-affected site that greets the Barwick family and their neighbours every day.
(ABC Rural: Matilda Hughes)
If by chance his farm receives enough rainfall he may be able to plant some seed in the hope that better rain will follow and growth can continue.
"We will definitely have to be prepared to take risks," Mr Barwick said.
"We have until early January to plant different summer crop options.
"That is a fair way out but we are starting off with virtually no sub-soil moisture whatsoever."
Mr Barwick said he planned to sow cotton if he sees rain early in the season, but any later and he would be left with the options of sorghum or sunflower.
Growers told to leave winter behind
With drought conditions across NSW, Mr Barwick's situation is not unique as most growers have not had any return from a winter crop.
With spring just around the corner and little rain predicted, NSW grain growers are now looking to the next phase of their planting program.
At AgQuip in Gunnedah this week, Australia's largest agricultural field day, growers were told they may need to take some risks if they want any chance of a growing a summer crop.
Loretta Serafin, leader of Northern Dryland Cropping Systems with the NSW Department of Primary Industries (DPI), told growers they need to look forward and leave winter behind.
Ms Serafin's advice for if farmers receive a few millimetres of rain was to consider planting some seed, but not everything.
"If we make a decision to plant on a limited profile, we make the decision with the knowledge that it is high risk," Ms Serafin said.
"Sometimes that will pay off and in other seasons it won't.

A crowd of grain growers sit in a shed, watching presentations from NSW DPI and researchers.
However, while growers may need to weigh up the risk of sowing after only a few millimetres of rain, NSW DPI has warned farmers not to risk it all.
Growers were also warned to ensure they had plenty of seed ready to go.
Ms Serafin said it was all about smart, and at times difficult, decision making.
"We can only deal with the cards that are played for us as they come, and so for me it is all about reality," she said.
"I want to be organised and know that we are making the best decisions today with the best knowledge at hand."