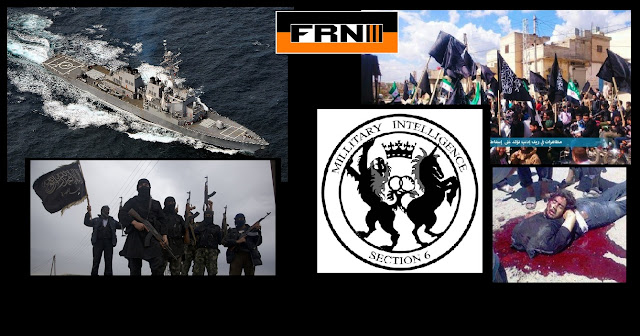 The US is increasing the number of cruise missile carriers in the Middle East to attack Syrian government forces, to be activated after the planned staging (hoaxing or false-flagging – ed) of alleged chemical weapons in jihadist-held Idlib province, the official representative of the International Atomic Energy Agency (IAEA) said on Monday, Russian Ministry of Defense, Major General Igor Konashenkov.

“The United States continues to increase the number of cruise missile carriers in the Middle East in connection to the preparations in Idlib province for yet another provocation with the alleged ‘use of chemical weapons,'” said the representative of the Russian entity.
According to the Major General, the American destroyer equipped with 28 Tomahawk missiles that recently entered the waters of the Mediterranean Sea could attack any part of Syria.
“On Aug. 25, the US Navy’s Ross destroyer, armed with 28 Tomahawk missiles, entered the Mediterranean Sea. Its range of action allows for attacks on the entire territory of Syria,” he said.
The USS Ross was used to hit Syria while based off the coast of Spain. Here’s video of that event last April, which FRN covered at the time, before being taken down that same night by US proxy hackers.


In addition, formerly another US destroyer, the 56-unit USS The Sullivans arrived in the Persian Gulf, while a B-1B bomber with 24 cruise missiles was moved to the US military base in Qatar.
Konashenkov detailed that the “preparations are a further confirmation of US intentions to take advantage of the staging organized by combatants of the [Al-Qaeda affiliated] Tahrir al-Sham [formerly the Al-Nusra Front], with the active involvement of the British secret services in Idlib province, with alleged ‘use of chemical weapons’ by Syrian forces.” Here he refers chiefly to the British MI6.
Yesterday, Igor Konashenkov reported that the Russian Center for Reconciliation in Syria has information according to which foreign experts would have arrived at the de-escalation zone at Idlib to stage a “chemical attack”.
This comes as the Syrian Army, spearheaded by their elite 4th Mechanized Units, Tiger Forces and Republican Guards, make final preparations to liberate the jihadist-held province. The operation against Idlib is expected to begin at some time in September.