Image of the Day: Satellite view of black carbon from North America wildfires and other aerosols, 23 August 2018 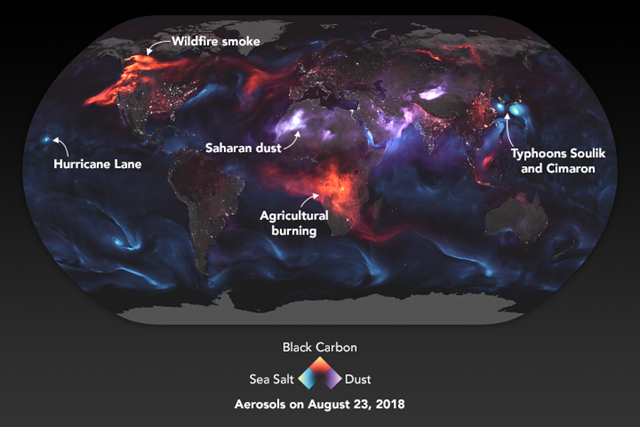 This visualization highlights Goddard Earth Observing System Forward Processing (GEOS FP) model output for aerosols on 23 August 2018. On this day, huge plumes of smoke drifted over North America and Africa, three different tropical cyclones churned in the Pacific Ocean, and large clouds of dust blew over deserts in Africa and Asia. The storms are visible within giant swirls of sea salt aerosol (blue), which winds loft into the air as part of sea spray. Black carbon particles (red) are among the particles emitted by fires; vehicle and factory emissions are another common source. Particles the model classified as dust are shown in purple. The visualization includes a layer of night light data collected by the day-night band of the Visible Infrared Imaging Radiometer Suite (VIIRS) on Suomi NPP that shows the locations of towns and cities. Graphic: Joshua Stevens / NASA Earth Observatory

(NASA) – Take a deep breath. Even if the air looks clear, it is nearly certain that you will inhale millions of solid particles and liquid droplets. These ubiquitous specks of matter are known as aerosols, and they can be found in the air over oceans, deserts, mountains, forests, ice, and every ecosystem in between.

If you have ever watched smoke billowing from a wildfire, ash erupting from a volcano, or dust blowing in the wind, you have seen aerosols. Satellites like Terra, Aqua, Aura, and Suomi NPP “see” them as well, though they offer a completely different perspective from hundreds of kilometers above Earth’s surface. A version of a NASA model called the Goddard Earth Observing System Forward Processing (GEOS FP) offers a similarly expansive view of the mishmash of particles that dance and swirl through the atmosphere.

The visualization above highlights GEOS FP model output for aerosols on 23 August 2018. On that day, huge plumes of smoke drifted over North America and Africa, three different tropical cyclones churned in the Pacific Ocean, and large clouds of dust blew over deserts in Africa and Asia. The storms are visible within giant swirls of sea salt aerosol (blue), which winds loft into the air as part of sea spray. Black carbon particles (red) are among the particles emitted by fires; vehicle and factory emissions are another common source. Particles the model classified as dust are shown in purple. The visualization includes a layer of night light data collected by the day-night band of the Visible Infrared Imaging Radiometer Suite (VIIRS) on Suomi NPP that shows the locations of towns and cities.

Note: the aerosol in the visualization is not a direct representation of satellite data. The GEOS FP model, like all weather and climate models, used mathematical equations that represent physical processes to calculate what was happening in the atmosphere on 23 August 2018. Measurements of physical properties, like temperature, moisture, aerosols, and winds, are routinely folded into the model to better simulate real-world conditions.

Some of these inputs come from satellites; others come from data collected by sensors on the ground. Fire radiative power data from the Moderate Resolution Imaging Spectroradiometer (MODIS) sensors on Aqua and Terra is one type of satellite data that was assimilated directly into the model. This type of data includes information about the location and intensity of fires—something that the model uses to help calculate the behavior of black carbon plumes.

Some of the events that appear in the visualization were causing pretty serious problems on the ground. On 23 August 2018, Hawaiians braced for torrential rains and potentially serious floods and mudslides as Hurricane Lane approached. Meanwhile, twin tropical cyclones—Soulik and Cimaron—were on the verge of lashing South Korea and Japan. The smoke plume over central Africa is a seasonal occurrence and mainly the product of farmers lighting numerous small fires to maintain crop and grazing lands. Most of the smoke over North America came from large wildfires burning in Canada and the United States.

Just Another Day on Aerosol Earth

Video shot near downtown Vancouver on Aug. 20 demonstrates the extreme haze of smoke from hundreds of wildfires burning in British Columbia, causing the mountains around the city to disappear from sight.

Plumes of smoke from the fires are believed to be travelling as far east as Ontario, the Maritimes and beyond — even across the Atlantic Ocean to Ireland.

That’s according to David Lyder, an air emissions engineer with the Alberta government and one of the minds behind FireSmoke.ca, a website whose animated map shows the probable trajectory of wildfire smoke within North America.

“Long-range transport of smoke from wildfires is not uncommon,” he told Global News.

Lyder brought up one forecast in which smoke travelled from northern Alberta and Saskatchewan, helping to trigger air quality advisories in Washington, D.C.
And it isn’t just B.C. that sends smoke so far.

“We get smoke from Siberia,” Lyder said.

Modelling of what wildfire smoke could look like on Aug. 25 at 8 p.m.FireSmoke.ca

The map forms one component of the BlueSky Western Canada Wildfire Smoke Forecasting System, a project that first developed in 2007 out of concern about the need for smoke projections to help inform weather forecasters, health authorities and other parties.

Data tracking all of these factors is pooled into a system that helps to forecast concentrations of fine particulate matter (PM2.5) — an air pollutant that can have negative effects on human health — from wildfires for up to 48 hours.
Canada’s BlueSky project uses the very same system, gathering data from the Canadian Wildland Fire Information System.

READ MORE: Smoke from B.C. wildfires impacting parts of Saskatchewan
The data helps to produce animations that display how PM2.5 concentrations will change over the next couple of days.

The map showed some heavy smoke hitting Ontario and lesser plumes travelling as far as Quebec and Labrador on Saturday; it had previously shown smoke hitting the Maritimes.

This animation shows heavy concentrations of smoke in Manitoba and Ontario as well as a lesser concentration hitting Labrador on Aug. 25. FireSmoke.ca

The people behind FireSmoke.ca are careful to note that the map shouldn’t necessarily be relied upon in isolation; it’s considered “experimental” and there are limitations.

Satellite detections, for example, are used to find fires. If areas where fires are burning are covered by clouds or smoke, then the emissions from those blazes won’t be included in forecasts.

Projections displayed by the map can be supplemented by looking at Canada’s Wildfire Smoke Prediction System (FireWork), which provides daily smoke forecasts.

Nevertheless, both these modelling systems have shown smoke reaching as far as the Maritimes.

Fine particulate matter is indeed reaching Eastern Canada, “but the concentrations are much lower in the Maritimes than they are in B.C.,” said Sarah Henderson, senior environmental health scientist at the B.C. Centre for Disease Control.

There are two components to wildfire smoke: PM2.5 and volatile organic compounds (VOCs).

While PM2.5 has been noted for its effects on human health, VOCs have more to do with how smoke interacts with our senses.

“VOCs are the things that make our eyes sting and that give smoke that campfire smell,” Henderson said.

“They’re not super risky, but they are irritating.”

“The volatiles from the smoke are gone by the time they get to the east,” Henderson said.

John Clague, a professor of earth sciences at Simon Fraser University, said satellite tracking of smoke has shown that heavy concentrations of particles have been carried from B.C. and California to locations thousands of kilometres to the east.

“I would say, however, that the duration of the exposure is limited,” he said.

While the physical effects of smoke are less pronounced by the time it travels such great distances, that doesn’t make it harmless.
Concentrations may be lower, but the fine matter is still there.
“Wherever it gets to, if smoke gets there, it carries with it some risk,” said Henderson.
Still, “we would expect that smoke from B.C. may have a small impact on health in eastern parts of Canada, if and when it arrives there,” she added.

BC wilвfire service has been cutting supplies and people to fight for several days. The community ran out of hoses and sprinklers during the worst of the fire and only firefighters certified through BC contractors were allowed in.. so people have stayed as the fires grew and their plea for more help was answered. Now 2 dozen trucks with supplies from Alberta are being told to leave

As of 1215pm people gathered at save-on-foods 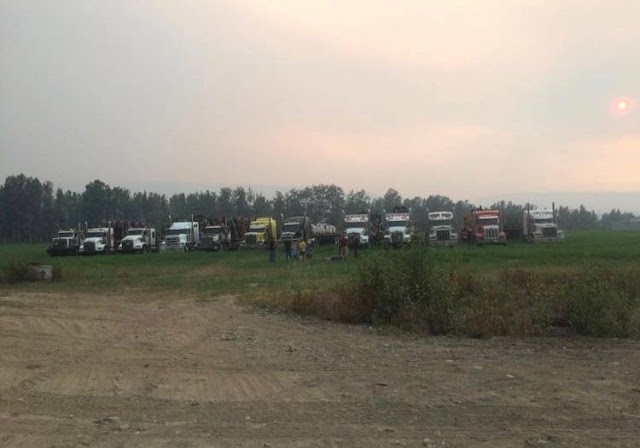 The truckers from Alberta have now left Burns Lake. According to Burns Lake councillor Charlie Rensby, the RCMP did not allow protesters to stop the truckers from leaving, and the protest has now moved to another location near the B.C. Wildfire Service base in Burns Lake.

Approximately 30 local residents are gathering near Overwaitea in Burns Lake this morning trying to prevent over two dozen Alberta truckers from leaving town.

The Albertan truckers brought fire suppression equipment such as sprinklers, pumps and hoses to Burns Lake to help combat the Babine complex fire on the Southside. The group of fires is zero per cent contained.

But the B.C. Wildfire Service says this particular high-capacity water delivery system isn’t going to work due to several factors, including the terrain and an insufficient water source.

In a statement Friday night, the fire service said the system requires close proximity to “very large bodies of water” in order to work.

“They also require relatively flat topography and are most effective in densely populated areas,” it said.

Fire crews are evaluating if the use of an alternate water delivery system could work to suppress the blaze.

Burns Lake councillor Charlie Rensby, who’s joining protesters this morning, said he and others were not convinced by this explanation.

“The biggest injustice is that politics is coming into play when we should be saving people’s livelihoods,” said Rensby.