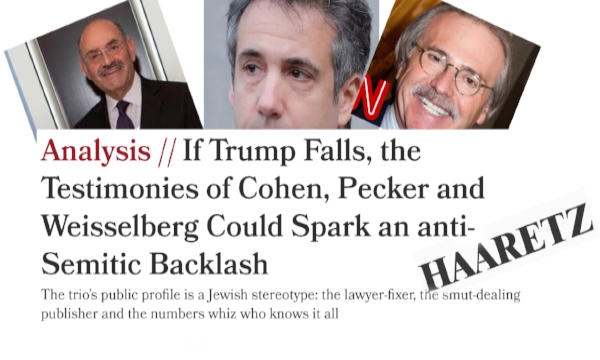 Haaretz delivered a warning today to American Jewry.  “If Trump falls, the testimonies of Cohen, Pecker and Weisselberg could spark an anti-Semitic Backlash.”

Many have passed through the Trump Administration’s revolving door and faded away quietly but those who may bring the president down are “the lawyer-fixer (Michael Cohen), the smut-dealing publisher (David Pecker) and the numbers whiz who knows it all (Alan Weisselberg).” Prominent Haaretz correspondent Chemi Shalev  is honest enough to openly acknowledge that “the trio’s public profile is a Jewish stereotype.”

Shalev dared to write the article every other political analyst has dreaded putting into words let alone text. “The name of the lawyer who implicated Donald Trump in the commission of federal crimes is Cohen. The name of the publisher who has agreed to tell investigators how he turned his newspaper into a clearinghouse for Cohen’s payments to women is Pecker. And the name of the accountant who has been granted immunity in order to testify about the role played by the Trump Organization in Cohen’s endeavors is Weisselberg. The common denominators of Cohen, Pecker and Weisselberg, beside their willingness to do whatever it takes for Trump in the past and their apparent willingness to inform on him now, is that all three are indisputably and recognizably Jewish.”

If you wonder why no one in America was courageous enough to  write about Trump being betrayed by his closest Jewish aids, Shalev’s answer is “anyone who does so risks being accused of generalizing, if not actively encouraging anti-Semitism.”   But this is just the first stage in this saga according to Haaretz’s correspondent. “Somewhere down the line. The racist, supremacist and neo-Nazi element of Trump’s base is already drooling at the impending opportunity of enlisting disgruntled rank and file Trump fans in a battle against the Jewish conspiracy aimed at their idol.”

Shalev realises that Trump’s days are numbered. And he believes the actions of Cohen, Pecker and Wiesselberg make Trump’s political survival unlikely. “Cohen’s admissions in a New York courtroom last week that his payments to porn’s Stormy Daniels and Playboy’s Karen MacDougal were made in accordance with Trump’s instructions have cast the President as a criminal who violated campaign finance laws. Pecker’s testimony could reportedly make clear that the two payments were part of a nefarious system. And Weisselberg’s account, though currently limited to Cohen’s payments, could pave the way to exposure of the long line of alleged misdeeds carried out by Trump as real estate mogul, franchising czar, reality star, presidential candidate and commander in chief.”

When Trump was elected some saw him as the “First Jewish President,” At the moment it looks as if it his Trump’s closest Jewish aides who may provide the final nails in his presidential coffin.  Enacting astute Jewish pre traumatic instinct, Shalev notes that “Trump repeatedly and profusely praises Paul Manafort, who isn’t Jewish, for remaining loyal despite the past and future convictions awaiting him. Cohen, Pecker and Weisselberg, who sound like a stand-up’s Jewish law firm, are, by implication, part of the vast conspiracy… that seeks to bring the President down and to undermine the voters’ verdict.”

Shalev uses the clearest possible language.  “If Trump emerges unscathed, a scenario that seems increasingly unlikely, fears of anti-Semitic backlash could recede. If Trump is impeached, or forced to resign, or impaired in any other way, shape or form, the outrage against his incriminators and their common heritage could turn into a clear and present danger for American Jews.” You ask, ‘what about Israel?’  Shalev doesn’t shy away from the question.  “The American right’s adoration of Israel won’t be an obstacle: Many of Trump’s constituents, like Netanyahu’s, can easily ignore the common bonds between Israel and its greatest Diaspora. Israel is the country of proud and nationalistic Jew-heroes that man the West’s forward outpost against radical Islam and who play a critical role in advancing the End of Days.”

Maybe the above explains the Trump administration’s indication yesterday that it is set to announce it rejects Palestinian ‘right of return.’  If Shalev is correct then the message here could be interpreted as follows -- we are still supporting Israel, Zionism, we are totally anti Palestinians, Arabs and Muslims but we don’t trust Jews either. This is, in fact, a common Zionist anti Semitic position. i.e., ‘We like and support Jews as long as they are somewhere else, preferably Zion.’

According to Shalev, “from the moment Cohen turned his back on Trump, and more so since Pecker and Weisselberg apparently joined him, the neo-Nazi network is busy preparing the flip side of the coin, the analogy that could impress Trump’s followers, if he falters: The three are portrayed as successors to Judas Iscariot, who betrayed Jesus to authorities.” I guess that you have noticed that while Shalev seems to be comfortable pointing at the ethnicity of Cohen, Pecker and Weisselberg he seems to refer to Goyim who do the same  as ‘neo-Nazis’ and ‘supremacists.’

Shalev writes that before Trump’s elections, “American Jewish organizations were quick to call out Trump for the suspected anti-Semitic messages in his statements and campaign.” But their voices receded “with the prodding of Netanyahu and the vouching of Sheldon Adelson… Trump’s disturbing words were swept under the carpet of his decidedly pro-Israeli polices.” Trump’s allegedly Jew-hating supporters were somehow ignored by the American media.

However, this may change very soon. “The Jewishness of the three former Trump aides who have now decided to testify against him could mar the artificial tranquillity and, in a worst-case scenario, spark a dangerous wave of anti-Semitism. American Jewish leaders would do well to prepare for such a stormy day, as would Netanyahu, who has placed all of his prestige on Trump and the American right.”

Shalev sarcastically suggests that  “if Netanyahu is forced to choose between the administration’s pro-settler, anti-Palestinian policies and his duty to fight anti-Semitism and stand up for beleaguered American Jews, they (America Jews) would do well to start seeking their salvation elsewhere.”

Havoc ahead, sums it up.

Atzmon's album Exile was BBC jazz album of the year in 2003.[7] Playing over 100 dates a year,[5] he has been called "surely the hardest-gigging man in British jazz."[8] His albums, of which he has recorded 15 as of 2016,[9] often explore the music of the Middle East and political themes. He has described himself as a "devoted political artist."[3]

Atzmon has written novels, journalistic pieces in such venues as CounterPunch,[10] Al-Arab online,[11] Uruknet,[12] The Palestine Telegraph,[13] and Aljazeera Magazine[14] and polemical works on Jewish identity. His criticisms of Zionism, Jewish identity, and Judaism, as well as his controversial views on Holocaust denial and Jewish history, have led to allegations of antisemitism and racism[15][16] from both Zionists and some leading anti-Zionists.
Posted by seemorerocks at 18:15