I for one won’t be shedding any tears for this warmonger. 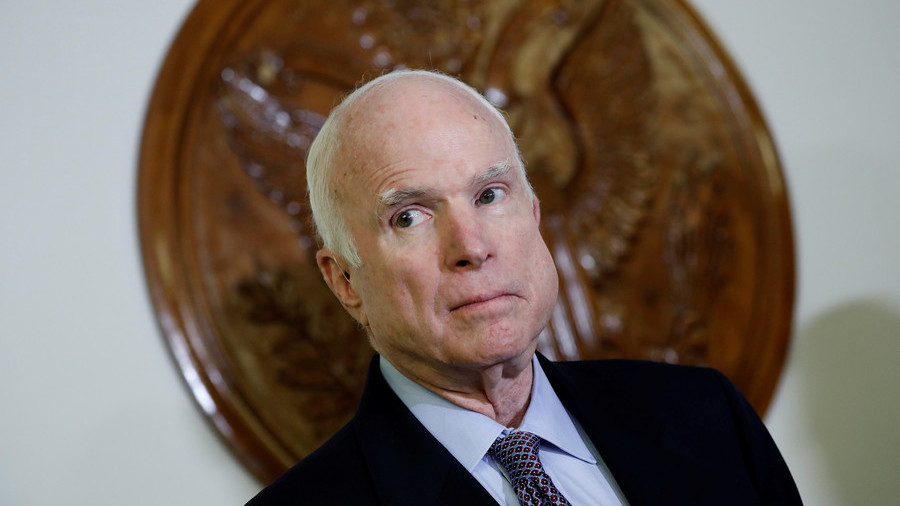 Republican Senator John McCain has died aged 81 after battling a rare form of brain cancer. The former presidential candidate had been diagnosed with a malignant brain tumor in the summer of 2017.

"Senator John Sidney McCain III died at 4:28 p.m. on August 25, 2018," McCain's office said in the statement. "With the Senator when he passed were his wife Cindy and their family. At his death, he had served the United States of America faithfully for sixty years."

McCain entered politics in 1980. He was elected to the US House of Representatives in November 1982; and to the Senate in 1986. Nicknamed “the maverick” for his willingness to break the party line in his fight for campaign finance reform and against the tobacco industry, McCain distinguished himself as a Republican, eventually mounting an unsuccessful bid for the presidency against Barack Obama in 2008.

A quintessential neoliberal Republican, McCain emerged in recent years as one of the loudest voices against President Donald Trump from within the GOP. Bashing Trump on immigration, on healthcare, on his rhetoric, and on meeting with Russian President Vladimir Putin, McCain went as far as to disinvite President Trump from his funeral earlier this year.

His never-Trump brand of conservatism earned him applause from even progressive Democrats, and criticism from more non-interventionist Republicans like Kentucky Senator Rand Paul, who said last year “we’re very lucky John McCain’s not in charge, because I think we’d be in perpetual war.”

In the foreign policy arena, McCain was a consummate interventionist. Eager to drum up support for war in faraway lands, the Arizona Senator once took to the stage to sing about it.

Senator McCain clamored for war in Syria before other Western states started to hum to the same tune, and was eager to ingratiate himself with “moderate rebels.” The senator repeatedly lobbied for “rebels” to be given military aid from the US, and called for cruise-missile strikes on the country’s legitimate government.

In Libya, he also praised the “heroic” actions of anti-government rebels, many of whom were in fact connected to Al-Qaeda. Like in Syria, McCain called for military aid for the rebels and cruise-missile strikes on government targets.

Syria is now in the seventh year of a bloody civil and foreign-proxy conflict, and Libya is a failed state and a center of the modern slave trade since its government was toppled.

Further back, McCain lobbied for and supported the US wars in Afghanistan and Iraq, which directly cost America an estimated $1.7 billion as of 2016, and cost tens of thousands of civilian lives. On Iraq, McCain said that US troops should occupy the war-torn country for “maybe 100” years.

And most recently, McCain turned his attention to Russia, whose president he accused of leading an “assault on the foundation of our democracy.” McCain’s assertion, made in his latest book ‘A Restless Wave’, was not backed with any evidence, but that did not stop the Republican firebrand from calling for the US to “cyber bomb” Russia.

John Sidney McCain III was born on August 29, 1936, on a US Naval base in Panama, which at the time was under the control of the United States. In joining the navy, McCain followed a family tradition –both his father and grandfather were admirals– though he proved a less-than-model pupil, finishing fifth from bottom in a class of 895.

McCain went on to serve as a combat pilot in the Vietnam War, where he was captured and detained –at one point in the notorious Hoa Loa prison, nicknamed the ‘Hanoi Hilton’– as a prisoner of war. McCain endured unspeakable torture and deprivation until his release in 1973. After release, he was awarded the Silver Star, Bronze Star, Purple Heart and Distinguished Flying Cross.

Earlier this week notorious war hawk US Senator John McCain (R-Az) was diagnosed with brain cancer. While the liberal and conservative establishments are sending their regards, Geopolitics Alert instead compiled a list of reasons why we don’t care about McCain....