Focus on the clouds

During the first half of August 2018, reports of noctilucent clouds to Spaceweather.com have tripled compared to the same period in 2017 and researchers at the University of Colorado may have figured out why.

"There has been an unexpected surge of water vapor in the mesosphere," Lynn Harvey of Colorado's Laboratory for Atmospheric and Space Physics (LASP) said.
This plot, which Harvey prepared using data from NASA's satellite-based Microwave Limb Sounder (MLS) instrument, shows that the days of late July and August 2018 have been the wettest in the mesosphere for the past 11 years:


In addition to being extra wet, the mesosphere has also been a bit colder than usual, Dr. Tony Phillips of the SpaceWeather.com reports. The combination of wet and cold has created favorable conditions for icy noctilucent clouds.
Harvey and her colleagues are still working to understand how the extra water got up there, Phillips continues. "One possibility involves planetary wave activity in the southern hemisphere which can, ironically, boost the upwelling of water vapor tens of thousands of miles away in the north, but the phenomenon could also be linked to solar minimum, now underway."
"It is notable that the coldest and wettest years in the mesosphere prior to 2018 were 2008 - 2009, the previous minimum of the 11-year solar cycle," Phillips concludes.
Featured image: Taken by Rauno Pakarinen on August 1, 2018 @ The Tahinlampi Pond, Pieksämäki via SpaceWeather.com
***

Noctilucent clouds, or night shining clouds, are tenuous cloud-like phenomena in the upper atmosphere of Earth. They consist of ice crystals and are only visible during astronomical twilight. Noctilucent roughly means "night shining" in Latin. They are most often observed during the summer months from latitudes between 50° and 70° north and south of the Equator. They are visible only during local summer months and when the Sun is below the observer's horizon, but while the clouds are still in sunlight. Recent studies suggests that increased atmospheric methane emissions produce additional water vapor once the methane molecules reach the mesosphere - creating, or reinforcing existing noctilucent clouds.[1]

They are the highest clouds in Earth's atmosphere, located in the mesosphere at altitudes of around 76 to 85 km (47 to 53 mi). They are too faint to be seen in daylight, and are visible only when illuminated by sunlight from below the horizon while the lower layers of the atmosphere are in Earth's shadow.

Noctilucent clouds are not fully understood and are a recently discovered meteorological phenomenon. No confirmed record of their observation exists before 1885, although they may have been observed a few decades earlier by Thomas Romney Robinson in Armagh.[2] Doubts now surround Robinson's out-of-season records, following observations, from several points around high northern latitudes, of NLC-like phenomena following the Chelyabinsk superbolide entry in February 2013 (outside the NLC season) that were in fact stratospheric dust reflections visible after sunset.

Noctilucent clouds can form only under very restricted conditions during local summer; their occurrence can be used as a sensitive guide to changes in the upper atmosphere. They are a relatively recent classification. The occurrence of noctilucent clouds appears to be increasing in frequency, brightness and extent.

Spectacular cloud formations known as 'cloud streets' have been spotted in southern England.

The long streaks of cloud were seen by BBC Weather Watchers in Oxfordshire and Gloucestershire on Thursday evening.

BBC weather presenter Simon King said the clouds are not uncommon in the UK but these stood out against the fading light of the sky.

"Cloud streets are essentially long rows of cumulus cloud aligned in the sky with the wind direction," he said. 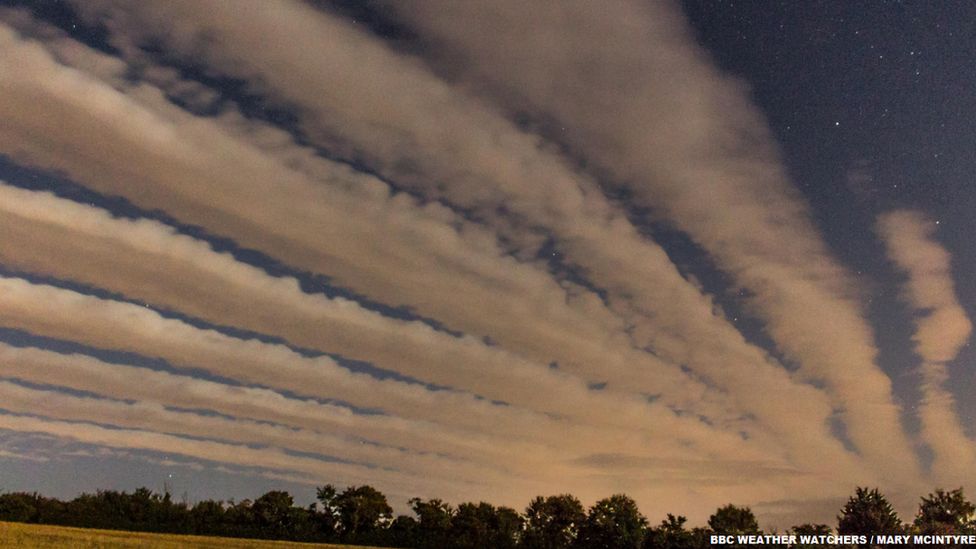 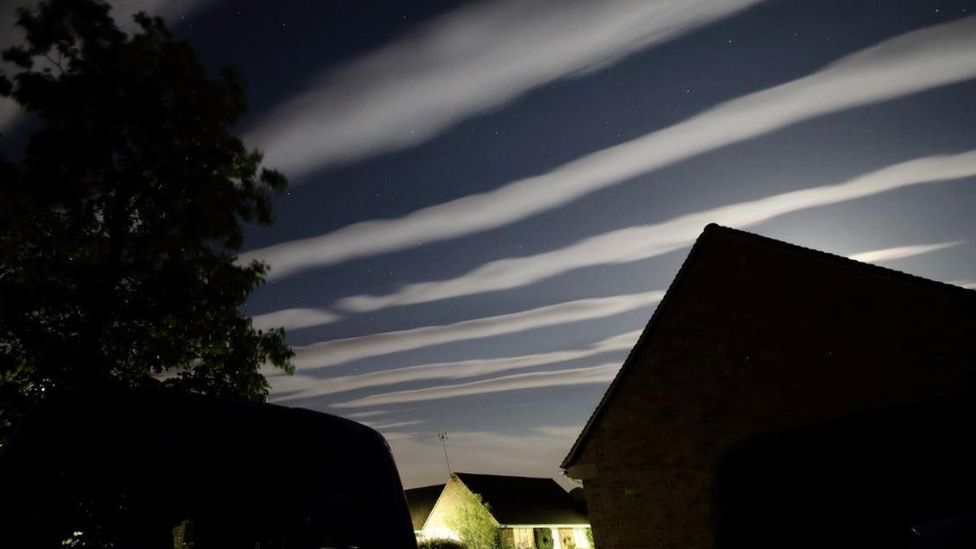 Warm air on the surface rises, cools and condenses into cloud.

In certain situations a warm layer of air in the lower atmosphere, called an inversion, acts as a lid preventing air from rising any further.

This means at the top of the cloud, the cooler air is forced out horizontally where it will then start to sink back to Earth.

In this area, cloud doesn't form, so it is clear. This all sets up a cylindrical circulation which is parallel with the wind, creating the long row of cloud. 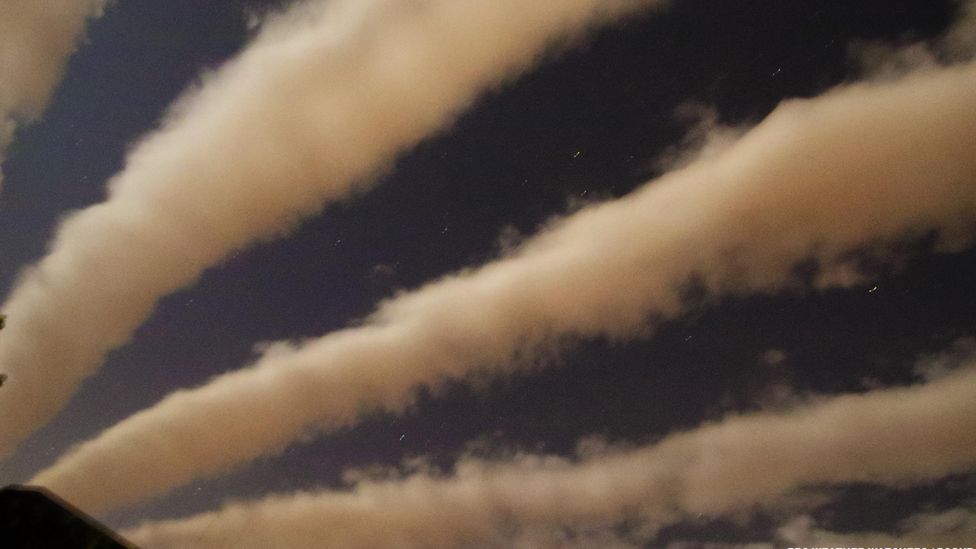