Here we go again. The BBC issuing another propaganda press release on behalf of the Ministry of Defence. Well spotted, Charles Shoebridge 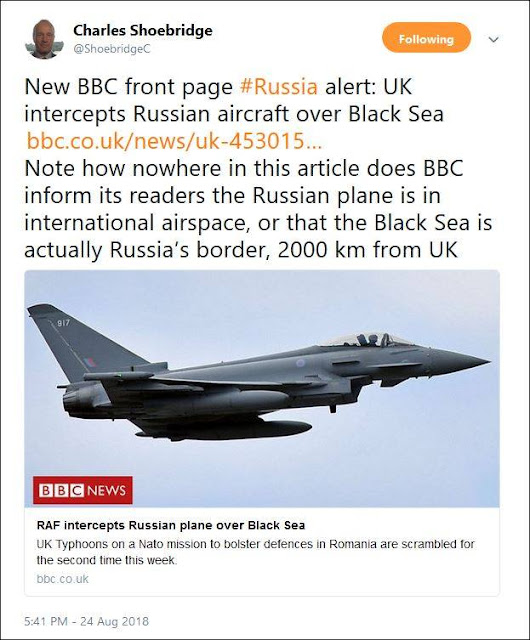 
RAF fighter jets have intercepted a Russian military aircraft over the Black Sea for the second time in a week, the Ministry of Defence has said.

The Typhoons were scrambled from a base in Romania on Thursday after a Be-12 maritime patrol aircraft was seen heading south-west from Crimea towards Nato airspace.

The RAF has a leading role in Nato's air policing mission in the region.

About 150 UK personnel are stationed at the Mihail Kogalniceanu base.

Nato made a commitment to boosting security on its eastern flank following Russia's annexation of Crimea from Ukraine in 2014.

1 (Fighter) Squadron, based at RAF Lossiemouth, Moray, has been operating alongside the Romanian Air Force from the base near Constanta since April.

It was the RAF's fifth such incident involving Russian aircraft since the Nato mission began.

The RAF said the Typhoons were scrambled on Thursday to "deter provocative Russian aircraft and reassure Romania and Nato allies".

More than 800 British troops have also been deployed to Estonia as part of an enhanced Nato presence in the Baltic states.

Mr Williamson said: "Whether in the skies over the Black Sea and the Baltic, or on the ground in Estonia, our actions send a clear message - we are collectively ready to respond to any act of aggression and will support our Eastern European allies to deter any threats faced."