The death of John McCain

I can’t think of a better tribute to warmonger, John McCain 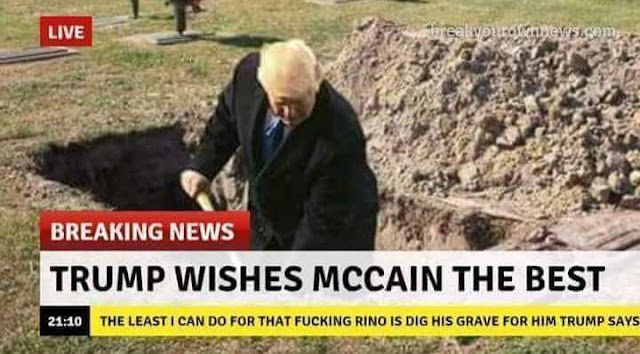 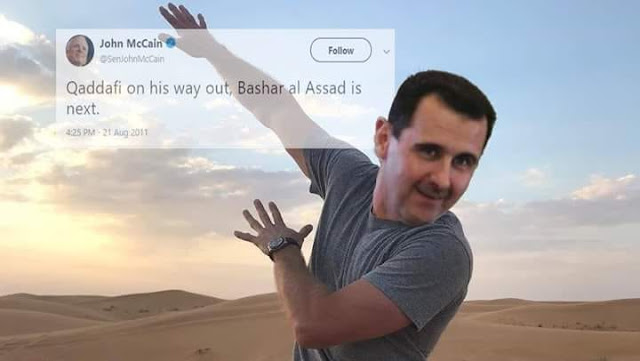 Peace-loving people the world over are failing to mourn the death of the US’s war loving, vile US Senator John McCain, who thankfully died on Saturday at age 81. One of President Donald Trump’s biggest critics within the Republican Party itself, for Trump’s stated desire to see less conflicts and wars, McCain finally died from brain cancer after it was revealed he had it in July 2017.

His death was reported by his political office. He was an untried war-criminal, and a perpetrator of crimes against humanity. Any number of his pro-war public proclamations, geopolitical projects, and lobbying efforts for war, were in direct violation of international law, the UN founding charter, and the Geneva Convention.
FRN likewise admonishes both the reactionary MSM and also so-called ‘progressives’ and ‘leftists’ who are today simply copy-pasting their moral compass from establishment talking points.
There is a trend in ‘respectable’ American internal media culture, to pretend that the deaths of extraordinarily evil political figures like McCain, ought to be treated with dignity, as a solemn event, as if we were ‘friends’, ‘colleagues’, or ‘members of the family’. We are not. FRN is proud to be part of bucking this trend, and speaking truth to power.
We remind our readers, and the public, that only as a result of McCain’s insistence on a public life as an advocate for genocide, war, torture, Salafi terrorism, domestic spying, overthrowing governments, suppressing labor, and opposing the rights of self-determination for billions of people the world over – only for these reasons does anyone know who he is. 150,000 people die each day. By the numbers, most of them lived lives not as good as they could have been, if not for the precise policies vilely advocated for by John McCain. There is no ‘private’ dimension to the public dissection of a political life, especially not one dedicated to overtly and disgustingly trampling on the world’s people.
Attempts to silence the tears of joy that the world’s people share today, in the name of depoliticizing a ‘solemn matter’, is precisely a cynical political move.
Our thoughts are not with his family and friends. None of us even know them, nor would we even be invited to clean their toilets.
For those wanting to mourn the dead, we’d kindly ask to mourn these dead instead – dead as a result of the policies which McCain, the war criminal, dedicated his life to advocating for:

–
In Iraq alone, it is estimated that a total of 1,220,580 have been killed, as of 2011 since the U.S. invasion in 2003. Over 60% of them violent. Thanks to John McCain, and the globalist imperialists, banksters and the military industrial complex, he spent your life advocating for.
Speaking of volunteer toilet-bowl cleaners, here’s a look at what the US’s fake-left’s shill darling, has to say. As a psy-op, her handlers are trying to recapture some of that Bernie-bro energy, back into Hillary’s next run.

As an intern, I learned a lot about the power of humanity in government through his deep friendship with Sen. Kennedy.

He meant so much, to so many. My prayers are with his family.

Washington Post✔@washingtonpost
From The Post's Editorial Board: John McCain, the irreplaceable American https://wapo.st/2PBXuix

The shallow con-artist, shill, huckster Alexandria Ocasio-Cortez is supported officially by the Atlantic Council,  means she is a low-level deep-state asset. One doesn’t have to be a genius to do this, in fact it helps not to be. Self-interest and a love for the spot-light are sufficient qualifications alone. If she doesn’t repent, and turn things around, she’ll be joining him one day, there can be no doubt about that.
But the candidate most likely to hand ‘Bernie’ votes to ‘anyone but Clinton’, is Bernie himself. This would be ‘unbelievable’, except that contrary to Bernie supporters, Bernie is what Bernie does:

Bernie Sanders✔@SenSanders
John McCain was an American hero, a man of decency and honor and a friend of mine. He will be missed not just in the U.S. Senate but by all Americans who respect integrity and independence. Jane and I send our deepest condolences to his family.

McCain was raised in a wealthy and powerful military home, with every privilege and advantage anyone could possibly dream of. He was known for having deluded himself into thinking that this privilege, which made him unaccountable to middle-class bureaucracies, defined him as a ‘bad-boy maverick’. In some ways, he would come to foreshadow reality-TV celebrity culture.
He was then a senator from the state of Arizona, was a prisoner of war in Vietnam for 5 years where the communist insurgents mistakenly did not execute him, but instead he acted, not out of principle but self-preservation, as an informant for the Viet-Cong in exchange for better treatment.


It was here that he received his real nick-name, not ‘Maverick’, but ‘Song-Bird John’. Nevertheless, despite that his father was able to purchase him special treatment at the hands of the Viet-Cong revolutionaries, he would be known for this ‘epic’ revealing quote:

Thankfully the ‘as long as I live’ clause of this has now been executed. Another one falls to the ‘Assad Must Go’ curse. The Assad curse is when world power players who have called for the deposition of Syrian President Bashar al-Assad but they themselves have died or been removed from positions of power.

He was also a failed presidential candidate in 2008 when he was defeated by Barack Obama. McCain struggled with a glioblastoma, an aggressive form of brain cancer discovered in July 2017 and had not been seen in the US Capitol in 2018.
Elected for the first time to the House in 1982, he went to the Senate four years later and managed to re-elect himself at every opportunity ever since.
In Congress, McCain was a pro-business conservative, free-market advocate and enemy of organized labor, but voted against the Republican majority on several key projects. After engaging in a scandal that became known as “Keating Five,” he made the reform of election campaign funding one of his flags.
McCain was a prominent critic of President Trump. After cynically criticizing Trump’s rhetoric about illegal immigration, even while McCain had also supported precisely the same measures in the past, Trump dismissed McCain’s military service as saying he preferred “people who were not captured.” Trump, here, was referencing what many US veterans of McCain really call him – Song-bird. McCain’s constant lobbying for wars, while also advocating for the continual cut of veterans services, made him one of the most hated ‘conservative’ candidates after the veteran vote in the history of US electoral politics. McCain, out of partisan loyalty, later endorsed Trump as soon as the businessman got the Republican nomination. He, however, withdrew his support in October 2016 after a tape appeared in which Trump boasted of ‘grabbing’ women ‘by the pussy’. McCain would remain a regular critic of Trump’s presidency.
In October 2017, McCain called Trump’s foreign policy a “spurious, half-cooked nationalism prepared by people who would rather find scapegoats than solve problems.”
However, McCain’s suggestion for solving problems, meant declaring war against Libya, Syria, Iraq, Afghanistan, Sudan, China, Russia, South Ossetia, Ukraine and many other places across the globe.
But McCain’s penchant for murdering innocents, and calling to “Bomb, bomb, bomb … bomb bomb Iran”, wasn’t just something he liked to do at a distance.
McCain also ran an illegal department of diplomacy and foreign policy out of the Senate Armed Services Committee. This was done especially during the Obama administration, even though Obama had executive power to put an end to it. Obama didn’t shut it down, so that any number of US war crimes could be placed within the predictable Dem vs. Rep controlled paradigm discourse of electoral politics.
Magically, McCain was allowed to travel the world, acting as an unofficial-but-official power broker, and arms dealer for Salafi terrorists in Libya, Iraq, and Syria. Here is pictured with identified members of Al Qaeda and ISIS:

His death comes at a time when the so-called Assad curse has claimed new victims.