"No signs of rising methane in Alaska" - Really?!

Yesterday Paul Beckwith posted this on Facebook with the question, "Really? This is a relief? Should I disband AMEG?"


NASA: Alaska Shows No Signs of 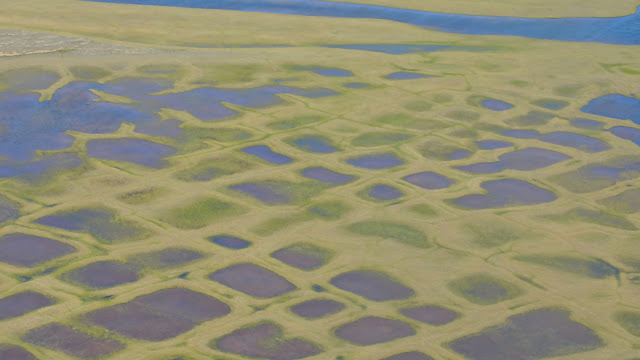 Despite large temperature increases in Alaska in recent decades, a new analysis of NASA airborne data finds that methane is not being released from Alaskan soils into the atmosphere at unusually high rates, as recent modeling and experimental studies have suggested. The new result shows that the changes in this part of the Arctic have not yet had enough impact to affect the global methane budget.

High concentrations of atmospheric methane have been measured at individual Arctic sites, especially in Siberia. This adds to the concern that massive methane releases are already occurring in the far North. NASA's multiyear Carbon in Arctic Reservoirs Vulnerability Experiment (CARVE) is the first experiment to establish emission rates for a large region of the Arctic.

In the new study, researchers analyzed methane measurements made over Alaska from May through September 2012 during the first season of CARVE. They estimated emission rates for the winter months, during most of which no methane was released because the soil was frozen.

"That's good news, because it means there isn't a large amount of methane coming out of the ground yet," said lead author Rachel Chang, formerly at Harvard University, Cambridge, Massachusetts, and now an assistant professor and Canada Research Chair in Atmospheric Science at Dalhousie University, Halifax, Nova Scotia.

Charles Miller of NASA's Jet Propulsion Laboratory, Pasadena, California, the principal investigator for CARVE, noted that results from a single year cannot show how emissions might be changing from year to year. "The 2012 data don't preclude accelerated change in the future," he said.

Vast amounts of carbon are stored in undecayed organic matter -- dead plants and animals -- in Arctic permafrost and peat. Scientists estimate that there is more than twice as much carbon locked in the frozen North as there is in the atmosphere today. The organic material won't decay and release its carbon as long as it stays frozen. But climate change has brought warmer and longer summers throughout the Arctic, and permafrost soils are thawing more and more. If large amounts of undecayed matter were to defrost, decompose and release methane and carbon dioxide into the atmosphere, the impact on global temperatures would most likely be enormous.

CARVE is a pioneering regional study of methane and carbon dioxide emissions across Alaska. CARVE makes frequent and sustained science flights across Alaska using NASA's Arctic-tested Sherpa C-23B aircraft. The C-23 carries a variety of research sensors, including gas analyzers that link CARVE methane and carbon dioxide measurements to World Meteorological Organization standards. Flight campaigns occur each month throughout the growing season (May through October), when Arctic carbon emissions are at their highest and change most rapidly. CARVE science flights began in 2012 and will continue through 2015.

Because no other program has made measurements as comprehensive and widespread as CARVE's, Chang said, "One of the challenges is that we have nothing to compare our results to. We can't say whether emissions have already increased or stayed the same. Our measurements will serve as a baseline."

Additional information on the CARVE investigation may be found at:

The results are available online in the journal Proceedings of the National Academy of Sciences. Other coauthors of the study are affiliated with the National Oceanic and Atmospheric Administration, Boulder, Colorado; the University of Colorado, Boulder; and Atmospheric and Environmental Research, Inc., Lexington, Massachusetts. The California Institute of Technology in Pasadena manages JPL for NASA.

NASA monitors Earth's vital signs from air, land and space with ambitious airborne programs like CARVE, ground-based observation campaigns and a fleet of satellites. NASA develops new ways to observe and study Earth's interconnected natural systems with long-term data records and computer analysis tools to better see how our planet is changing. The agency shares this unique knowledge with the global community and works with institutions in the United States and around the world that contribute to understanding and protecting our home planet.

Responses were divided between those calling "bullshit" and those like the following:

Mike H Angel Martin , nobody disputes the danger of methane and the clathrates are there,but the time bomb THEORY is just that,it seems a bit silly to worry about future methane while ignoring the fact that we are producing the bulk of it and the arctic is producing little.
Like · Reply · Yesterday at 17:31

Mike H Angel You people are alarmists not solutionists..

Art Jaquez A realist does not ignore the facts in favor of a cult following.

It actually took a while for folks to realise that the article did not carry yesterday's date but was more than a year old.

I remembered something that related to NOAA (admittedly not NASA)

"I have tried to find data of NOAA's website and have found that a lot of recent data is simply not there.

If it was a simple mistake it would have been corrected by now but it has not.

I can understand people's suspicions about falsification and I think there are reasons to support that. It is not the scientists in the field but the people who are in charge with a vested interest in methane not being a problem.

There is a lot of pressure on these organisations - such as calls from Congress for NOAA to deal witweather",not "climate change".

The pressures to come up with results that contradict "inconvenient" results are huge.

With the bad news of recent weeks which can only get worse I believe these political presure will only increase."

On 25 May I posted an alert of extra high methane readings above Barrow, Alaska

On the basis of developing news of rapidly melting ice in the Arctic and especially in the ocean above Siberia, which is ice-free and with water that is above freezing (which raises the spectre of a rapid increase in the release of methane) I decided to check exactly what I could find out.

When I opted for data from this year, I got the following whereby data stoped in February 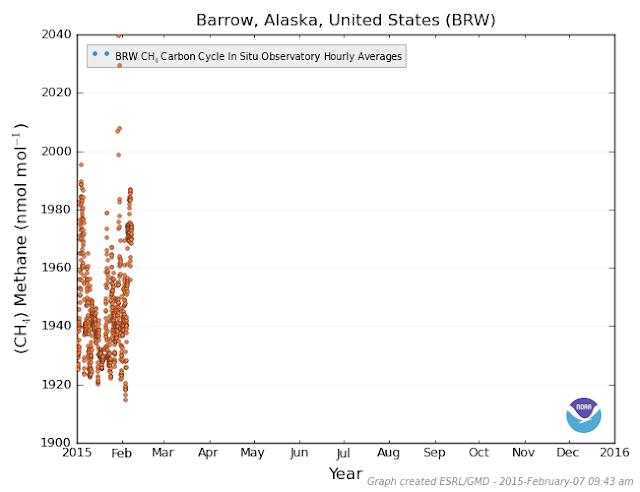 However, when I broadened the search to a multi-year one I got a chart that extends into this year.

What I observe from this is that the line of the mean readings seems to reflect the patterns of previous years, but that peak readings are much higher (more than 2000ppb). 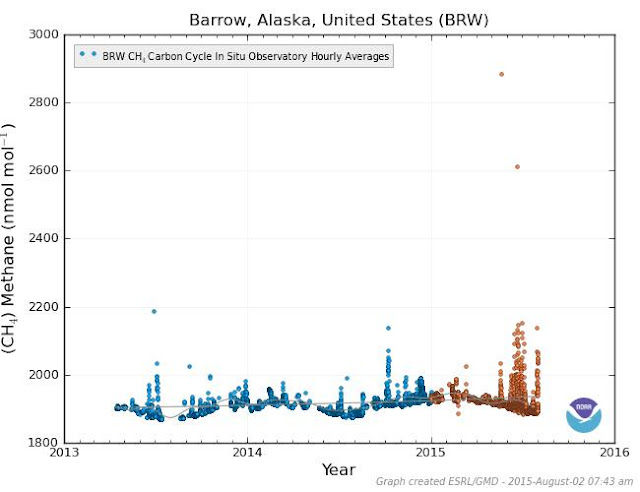 The latest data presented by Sam Carana in Arctic News reflects a similar situation with average readings remaining much the same,but with higher daily peak readings.

If you are a methane 'sceptic' you would want to look at the average readings but the preponderance of daily peak readings must be highly significant. 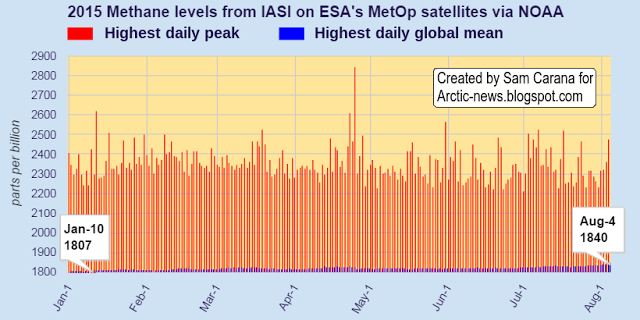 It is the trend of readings (prepared by Sam Carana) of methane readings for the two weeks from July 19 to August 4 that give reason to be worried. 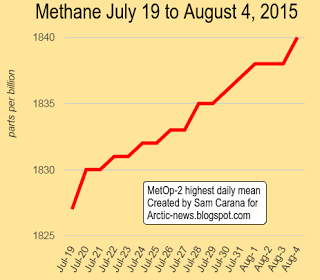 With the situation with the data from the NOAA website does indicate that perhaps, at best NOAA are messing up, or, at worst, removing data they don't like.

While we are using about this I wonder what this news from today is about.

A problem with the F17 DMSP Satellite

On August 5, 2015, a problem arose with the F17 DMSP satellite that provides data to generate the daily maps and time series in the NSIDC Sea Ice Index and Arctic Sea Ice News and Analysis, as well as the Greenland Today daily melt extent. This has led to spurious values of sea ice for both the Arctic and Antarctic, and unreliable melt data for Greenland for this date. NSIDC is in the process of removing the spurious data, and will be closely monitoring the incoming F17 data stream.

In the meantime I am watching the whole situation in the Arctic with great trepediation and l'll be watching it closely in the coming weeks.

The warning signs keep getting stronger. 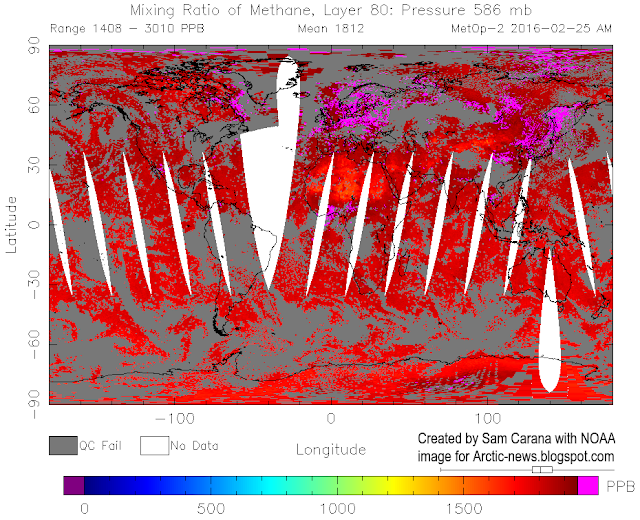 Again, this very high level was likely caused by methane originating from the seafloor of the Arctic Ocean, at a location on the Gakkel Ridge just outside the East Siberian Arctic Shelf (ESAS), as discussed in the earlier post.
This conclusion is supported by the methane levels at various altitudes over the ESAS, as recorded by both the MetOp-1 and MetOp-2 satellites in the afternoon, as illustrated by the combination image below showing methane levels at 469 mb.

Scientists warn Arctic methane emissions are out of control

An alarming new study warns that the emission of methane trapped in the Arctic may have been severely underestimated.

As climate change continues to warm the world’s polar regions, the gas trapped below the surface of the ice and permafrost is released at an increasing rate. According to a report from theWashington Post, a recent study from researchers at San Diego State University have reached a startling realization; the rate at which this gas has been released in recent years has been grossly underestimated by climate researchers.
Permafrost in the Arctic is soil that has never been in a state other than frozen solid; it contains large quantities of organic material that have more or less been preserved since the soil first formed thousands of years ago. As permafrost thaws, so does this ancient organic material. As it decomposes, it emits unfathomable quantities of methane.
Scientists are just starting to wrap their heads around how much methane is actually being released as the Arctic permafrost thaws. The majority of recent permafrost research has focused on how it behaves during the warmer summer months in the Arctic, but the recent paper published in the Proceedings of the National Academy of Science examined how much methane is being released into the atmosphere during the cold season. Spoiler alert: it’s more than anyone previously suspected.
According to lead author Donatella Zona, assistant professor from San Diego State University, “The cold period in general is the time of the year that is warming the fastest in these arctic ecosystems. Really, if we’re thinking about the future of climate change, we need to understand if this time of the year is important.”
Along with a group of almost 20 other scientists, Zona collected data from five different monitoring sites in Alaska between June 2013 and January 2015. They also examined data collected by aircraft over the same time period. The study found that during the cold season, methane emissions were shockingly significant. Emissions from September to May made up almost half of the methane emissions from the monitoring sites over the entire year.
Methane emissions from permafrost are an example of a positive feedback loop. As the temperature warms in the Arctic, the ice melts faster and releases more methane. As more methane is released into the atmosphere, more solar radiation is trapped, which leads to further warming. If researchers can’t find a way to slow the warming of Arctic permafrost, the climate consequences may be dire.
A press release from NASA’s Jet Propulsion Laboratory outlining the details of the study can be found here.