A Russian soldier has died a 'hero' after wiping out a band of ISIS fighters by calling in airstrikes on himself.

The special forces officer was on a one-man mission to track down ISIS militants in the area around Palmyra, when he found himself surrounded by enemy fighters.

Caught in a hopeless situation, he directed Russian aircraft to bomb his location, killing himself and the ISIS fighters that surrounded him.

A Russian soldier died in an airstrike that he directed on himself after finding himself surrounded by ISIS militants near Palmyra. Pictured, Iraqi soldiers fire a rocket toward ISIS fighters on the outskirt of the Makhmour south of Mosul, Iraq

‘An officer of Russian special operations forces was killed near Palmyra while carrying out a special task to direct Russian airstrikes at Islamic State group targets,’ said a spokesperson for the Russian military.

‘The officer was carrying out a combat task in Palmyra area for a week, identifying crucial ISIS targets and passing exact coordinates for strikes with Russian planes.

‘The officer died as a hero, he drew fire onto himself after being located and surrounded by terrorists.’ 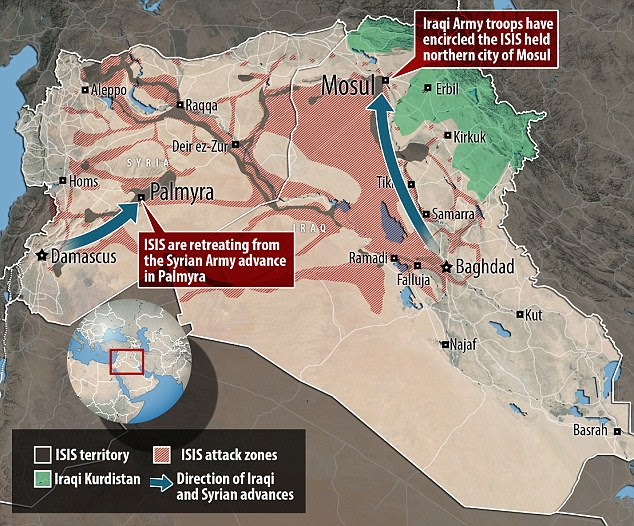 The Russian campaign began on September 30, but few details of the soldiers on the ground have emerged since.

ISIS media claimed last week that five Russian special forces officers had been killed near Palmyra, sharing images and videos of a body.

But Kremlin spokesman Dmitry Peskov denied at the time that Russian officers were participating in the advance on Palmyra, which has been under ISIS control since May 2015.

He instead claimed 'the advance is carried out by contingents of the Syrian army', with support from Russian warplanes and allied militia on the ground.

It comes the day after Syrian troops entered Palmyra, with photographs emerging of Bashar al-Assad's forces within the ancient city itself.

Meanwhile, the ISIS second-in-command Abdul Rahman Mustafa al-Qaduli has been killed in bombing raids in Syria.

The ISIS finance minister had a $7million bounty on his head, and US defence officials have claimed his death will make it more difficult for ISIS to operate and pay its fighters.


He said: 'They will be replaced but we will continue to go after their leadership.'

The U.S. military has killed numerous ISIS leaders in recent months. Earlier this month the Pentagon said it killed Omar al-Shishani, described as the Islamic State's 'minister of war', in an airstrike in Syria.

In November, the Pentagon said an airstrike in Libya killed Abu Nabil, another top ISIS leader.

The Iraqi army said Thursday its troops and allied militia had launched what is expected to be a long and difficult offensive to retake the second city of Mosul, ISIS's main hub in Iraq.

The army did not say how long this phase of the operation was expected to take and Iraqi forces still look far from being in a position to take the city itself.

The joint operations command is coordinating the battle by Iraqi security forces to retake the large parts of the country seized by ISIS during a lightning offensive in 2014.

It includes representatives from the US-led coalition that has provided air support, training and military advisers for the Iraqi army in its fightback.

But Mosul - which along with Raqqa in Syria is one of the jihadists' two main hubs - would be a major prize.

Experts have warned that any battle to retake the city will be difficult, given the significant number of jihadists and civilians in the city and the time ISIS has had to prepare defences.

Lieutenant General Sean MacFarland, the commander of the US-led operation against ISIS, has said that Iraqi generals do not think they will be able to recapture Mosul until the end of 2016 or early 2017 at the earliest.