Why is David Cameron so silent on the recapture of Palmyra from the clutches of Isis?
In the end, it was the Syrian army - and its Hizballah chums from Lebanon, and the Iranians, and the Russians - who drove the Isis murderers out of Palmyra 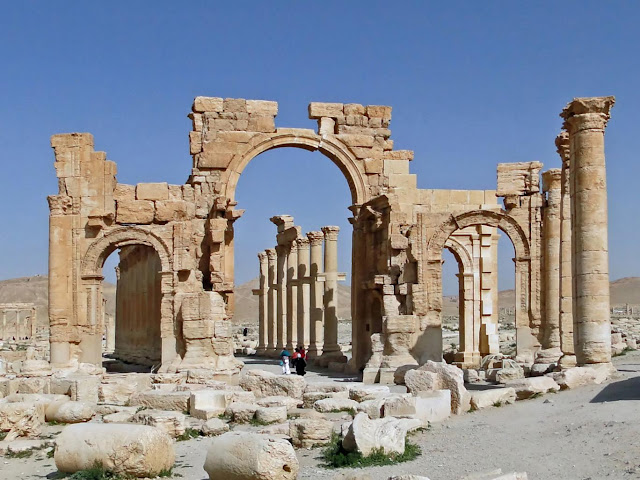 The biggest military defeat that isis has suffered in more than two years. The recapture of Palmyra, the Roman city of the Empress Zenobia. And we are silent. Yes, folks, the bad guys won, didn't they? Otherwise, we would all be celebrating, wouldn't we?

Less than a week after the lost souls of the 'Islamic Caliphate' destroyed the lives of more than 30 innocent human beings in Brussels, we should - should we not? - have been clapping our hands at the most crushing military reverse in the history of Isis. But no. As the black masters of execution fled Palmyra this weekend, Messers Obama and Cameron were as silent as the grave to which Isis have dispatched so many of their victims. He who lowered our national flag in honour of the head-chopping king of Arabia (I'm talking about Dave, of course) said not a word.

As my long-dead colleague on the Sunday Express, John Gordon, used to say, makes you sit up a bit, doesn't it? Here are the Syrian army, backed, of course, by Vladimir Putin's Russkies, chucking the clowns of Isis out of town, and we daren't utter a single word to say well done.

“If the Americans wanted to destroy Isis, why didn't they bomb them when they saw them?” a Syrian army general asked me, after his soldiers' defeat His son had been killed defending Homs. His men had been captured and head-chopped in the Roman ruins. The Syrian official in charge of the Roman ruins (of which we cared so much, remember?) was himself beheaded. Isis even put his spectacles back on top of his decapitated head, for fun. And we were silent then.

Putin noticed this, and talked about it, and accurately predicted the retaking of Palmyra. His aircraft attacked Isis - as US planes did not - in advance of the Syrian army's conquest. I could not help but smile when I read that the US command claimed two air strikes against Isis around Palmyra in the days leading up to its recapture by the regime. That really did tell you all you needed to know about the American "war on terror". They wanted to destroy Isis, but not that much.

So in the end, it was the Syrian army and its Hizballah chums from Lebanon and the Iranians and the Russians who drove the Isis murderers out of Palmyra, and who may - heavens preserve us from such a success - even storm the Isis Syrian 'capital' of Raqqa. I have written many times that the Syrian army will decide the future of Syria. If they grab back Raqqa - and Deir el-Zour, where the Nusrah front destroyed the church of the Armenian genocide and threw the bones of the long-dead 1915 Christian victims into the streets - I promise you we will be silent again.


Aren't we supposed to be destroying Isis? Forget it. That's Putin's job. And Assad's. Pray for peace, folks. That's what it's about, isn't it? And Geneva. Where is that, exactly?
Posted by seemorerocks at 19:03