I was studiously ignoring the US presidential campaign but it is getting too interesting to ignore.

No NY Debate, says Clinton Campaign, Until Sanders Changes His 'Tone'
Following landslide victories on Saturday in Washington, Alaska, and Hawaii, Sanders looks ahead to contests in Wisconsin, New York, and beyond 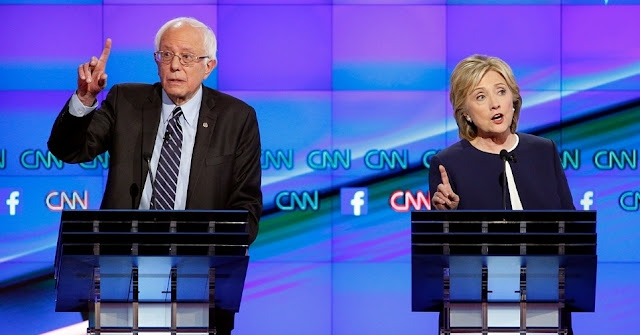 Update: 3:30 EDT
Hillary Clinton's chief campaign strategist has dodged Bernie Sanders' call for a debate before the April 19 primary in New York, saying the former secretary of state's response depends on whether the Vermont senator changes his "tone."
"This is a man who said he'd never run a negative ad ever. He's now running them. They're planning to run more," Clinton operative Joel Benenson said Monday on CNN. "Let's see the tone of the campaign he wants to run before we get to any other questions."

Asked what the risk is to debating Sanders in New York, Benenson replied that there is "no risk" for Clinton but that Sanders "doesn't get to decide" the schedule.

"She's done very well in the debates. The debates have been very good, but Sen. Sanders doesn't get to decide when we debate, particularly when he's running a very negative campaign against us," he said. "Let's see if he goes back to the kind of tone he said he was going to set early on. If he does that, then we'll talk about debates."

"So no chance of a New York debate?" CNN's Kate Bolduan reportedly pressed.
"I didn't say that," Benenson said. "I said we're going to see what kind of tone he sets."

With the momentum in Bernie Sanders' favor following a triple victory in the 'Pacific Primary' over the weekend—beating rival Hillary Clinton by landslide margins in Washington, Alaska, and Hawaii—his campaign thinks it's time to treat voters in upcoming states to something they haven't seen in nearly three weeks: a televised debate.

With the next primary in Wisconsin on April 5th followed by the Wyoming caucus on April 9th, the Sanders campaign is now calling for a televised debate with Clinton in New York sometime prior to that large state's primary on April 19th.
Appearing on Meet The Press with Chuck Todd on Sunday, Sanders said that potential voters in New York and beyond should be allowed to hear from the candidates before the next wave of voting. "I would hope very much that as we go into New York state, Secretary Clinton’s home state, that we will have a debate – New York City or Upstate, wherever – on the important issues facing New York and, in fact, the country," Sanders said.

Asked by the New York Times on Sunday, a Clinton campaign spokesperson declined to comment about the debate proposal.

Later on Sunday, Sanders' campaign manager Jeff Weaver sent a letter (pdf) to his counterpart in the Clinton campaign, Robby Mook, laying out the argument for why a debate would be in the best interest of voters and reminding Mook that the two campaigns had agreed to "three additional debates – one in March, one in April, one in May – in return for our campaign agreeing to the late scheduled debate in New Hampshire prior to that state’s primary."

As Alex Garafolo explains at the International Business Times, there's nothing politically surprising about Sanders wanting to put all his chips on the table ahead of the New York contest:

In the April 19 primary there are 247 delegates at stake. While the delegates in the primary are allocated proportionally, a decisive win in the state could either bring Sanders near even with (or even ahead of) Clinton, while a Clinton win would effectively end Sanders chances of winning the nomination. Clinton currently holds double digit leads in the latest polls of likely voters in the state. Sanders hopes a debate in the state could turn those numbers around.

To that end, the Sanders campaign has made no secret that it is gearing up for an aggressive drive for New York votes. "To capitalize on his fresh momentum,"
theWashington Post reports on Monday, "Sanders plans an aggressive push in New York, modeled after his come-from-behind victory a few weeks ago in Michigan. He intends to barnstorm the state as if he were running for governor.

His advisers, spoiling for a brawl, have commissioned polls to show which contrasts with Clinton — from Wall Street to fracking — could do the most damage to her at home."

And as Tad Devine, one of Sanders' top strategists, explained to the Post, "We’ll be the underdog, but being the underdog in New York is not the worst situation in politics. We’re going to make a real run for it."

The last head-to-head debate between Clinton and Sanders was held on March 9th in Miami, Florida.

All Hell Is Breaking Loose at Arizona Election Fraud Hearing

A raucous hearing on election fraud in the Arizona primary is still going on in Phoenix. As of this writing,the hearing was moved to a separate room and is currently in recess due to continued outbursts of protest in the gallery.

Helen Purcell began the Arizona Election Fraud hearing by saying “I want to begin by apologizing what took place on March 27th… As I said in the past, I am deeply sorry.”

However, it’s clear that the people of Arizona have no intention of forgiving or forgetting, given the anger expressed by those who signed up to speak on alleged election fraud. The rowdy crowd is parading up to speak in large numbers, calling for Purcell’s resignation and for a revote.
“Our right to vote and to have that vote counted is the most direct way that citizens can participate in our political system… People tried to do our civic duty and couldn’t,” Arizona citizen Patrick Syfter said. “You made people choose between voting and keeping their jobs… You must resign. Stop pretending that you represent us. We do not want platitudes… This will not end today. We will be back every vote to hold you accountable.”
Air Force veteran Dean Palmer described his horrific experience voting in Maricopa County.

“My experience down there, it was tough… People in wheelchairs and canes in the heat… We were out of provisional ballots at 7am… So many people, they wheeled up there and got hit with the sprinklers. So many people, they couldn’t take it. They had to leave, people were crying.”

The executive director of the Arizona Students’ Association shared the testimony of a student who had just come back from a one-year tour in the Army.
“I just spent a year laying down my life to protect the rights of Americans. I faced death every single day. One of the things I kept telling myself was “It was worth it.” … Yet the right that I looked at death over a year for was taken from me.”
“There were no parking spaces, no handicapped spots, and when I went back to my car I was afraid that I would get a parking ticket,” said another woman.
The mood of the crowd was often raucous, cheering wildly at every mention of a revote and booing every time Purcell or Arizona Secretary of State Michele Reagan tried to shrug off responsibility. Michelle Ugenti-Rita, who chaired the hearing, could barely keep order as the people often shouted for a revote, and at one point the hearing broke down completely as citizens cried out that their place in line to speak had been skipped.
Arizona State Representative Jonathan Larkin (D-Glendale) is the only member of the hearing who has openly called for Purcell to resign. He demanded to know how voters can get in touch with Purcell after the hearing. When she advised them to go to her website, he dryly asked, “And you’re ready for the flow this time?”
Rep. Larkin was often silenced by Representative J.D. Mesnard (R-Chandler) throughout the proceedings, particularly when Larkin linked the voting suppression of the previous primary to the passage of the infamously unpopular State Bill 1516, which “permits the transfer of campaign funds from one candidate to another.” In other words, the bill allows candidates to treat each other to cash injections whenever they please, which critics say would lead to undue influence and back-door deal-making.

Secretary of State Reagan said “We could debate 1516 all day,” and the crowd shouted “Do it!” after which Rep. Mesnard snidely mocked the crowd with “Do you guys even know what 1516 is?” (This drew a forceful round of boos.)
Mesnard repeatedly told the crowds that no revote would be taken, despite repeated insistence from Arizona citizens that their voices had not been heard
The tone of the election fraud hearing is summed up best by a citizen who said, “The corruption has become so prevalent, that you became comfortable, and you became so comfortable, that you became lazy, and you became so lazy, that you got caught. You (Purcell) are a snake in the grass and we see you!”