Throughout this storm tempreatures are unprecedentally warm - in the mid-20's. I have never experienced anything like this in late March.


Nearly 200 people have been evacuated on the West Coast, and trees have brought down powerlines in Auckland, as wild weather lashes the country. 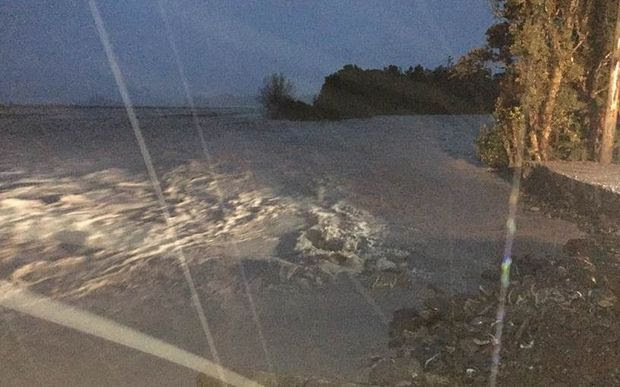 Heavy rain caused the Waiho River on the West Coast to breach its bank, the upper North Island has been hit by strong winds and MetService said the bad weather was expected to continue into the afternoon.

What you need to know

Wild weather: What you need to know 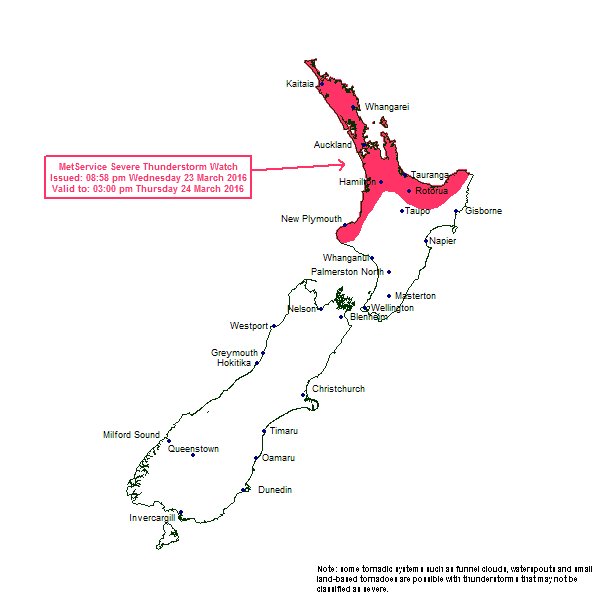 A local state of emergency was declared early this morning on the West Coast, after flooding forced the evacuation of nearly 200 people in Franz Josef.
The chair of the Glacier Country Tourism Group, Rob Jewell, said 80 of the tourists were staying in a welfare centre.

Ensuring the welfare of the town's guests was key, he said.

The Waiho River breached its bank near the town about 11.50pm last night.

Authorities said 186 people were evacuated at different stages as the river first made its way to the Scenic Circle Hotel, and moved towards the Top Ten Holiday Park and the Westwood Lodge. 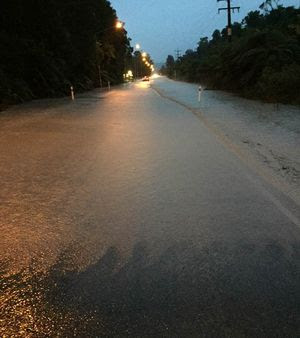 Flooding on a road near Franz Josef today
Photo: NZTA

Westland Civil Defence public information manager Andy Thompson told Morning Report it was not a normal flooding, with the river potentially creating a new channel through the area.

He said the water was moving swiftly and cars were being tossed around in the car park and the water supply has since been damaged.

In some places there was no water at all, he said.

Mr Thompson said the Red Cross was sending a welfare truck, and the area would be assessed at first light. 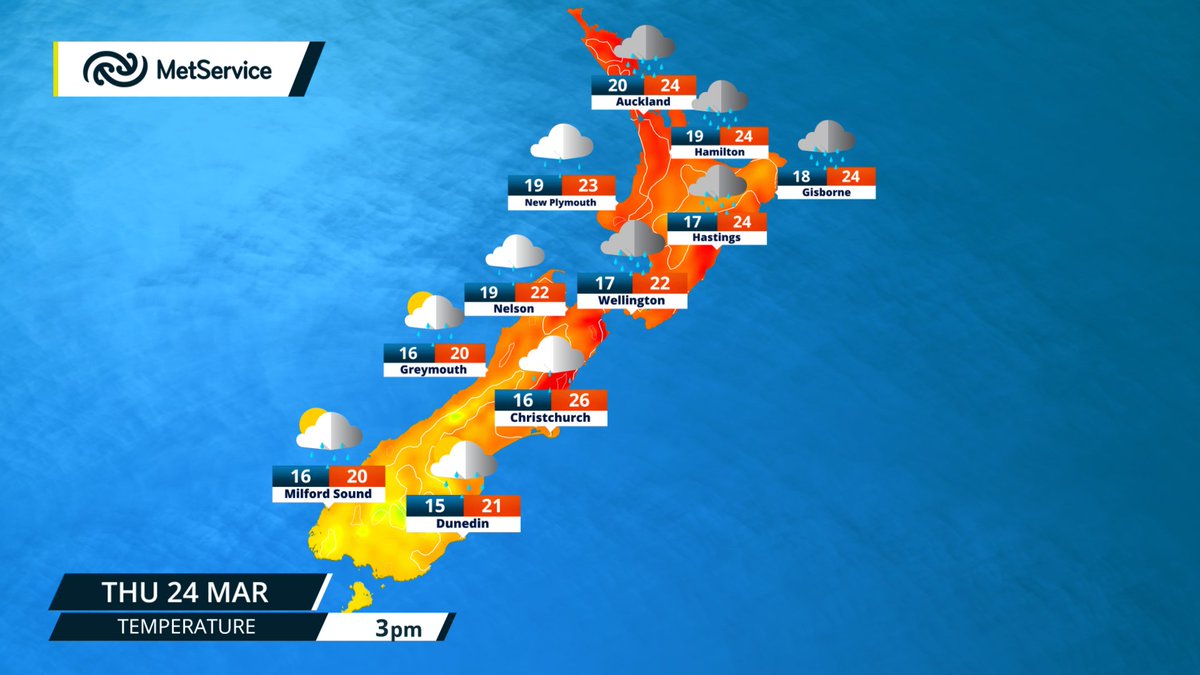 Nelson Tasman Civil Defence said emergency services have helped some households to evacuate flooded homes near the Riwaka River, which burst its banks around dawn.

Duty officer Roger Ball said more than a dozen Riwaka properties were thought to be flooded but the extent of the damage was not yet known. 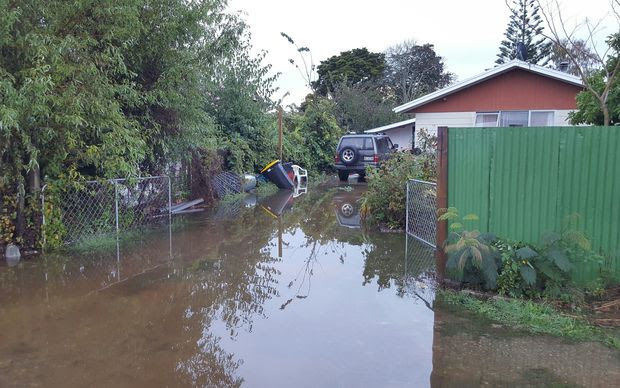 He said there had been between 250 and 350 milimetres of rain over the hills during a short period of time.

Our reporter in the district said flood waters were up to doorways but there was no indication of where it was coming from.

Residents in the area were seen this morning leaving homes with bags packed.
There have also been reports of slips causing damage to property in Marahau near the start of the Abel Tasman National Park track. 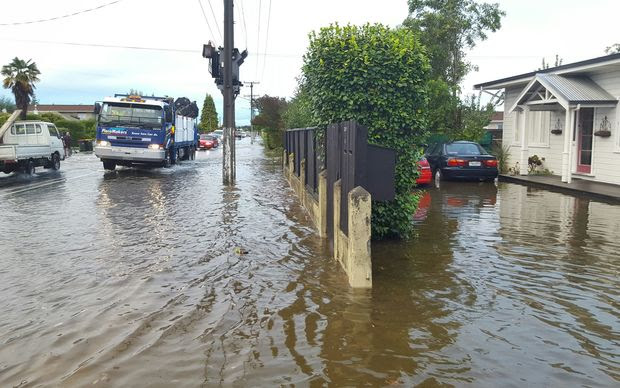 Mr Ball said there was water across properties and roads in the area.
The flooding also caused the closure of State Highway 60 at Riwaka, and between Upper Takaka and Collingwood. Further north, almost 13,000 homes and businesses are without power around Auckland because of stormy weather.

The biggest affected areas have been around Warkworth in the north, Waiheke Island and the eastern bays of the North Shore.

As many as 18,000 people were without power at the peak of the problem.

A Fire Service spokesperson said it had attended more than 130 emergency incidents around the Auckland region since bad weather hit early this morning.

One of the latest arcing power lines sparked a house fire in Wallath Road, Onehunga, but it had been extinguished when they got there.

They included clearing trees from roads or power lines, dealing with arching powerlines and helping to secure roofs that were lifting.

There had been no reports of injury.

WeatherWatch analyst Philip Duncan said the overnight gales were not being caused by a storm.

"It's one of those rare cases where the winds can be blamed on a very large high pressure system east of the country, rather than a storm or low moving in".

See what areas are affected here.

State Highway 16 west of Auckland is closed after a serious crash.

The collision happened near Kumeu, with the road closed in both directions.
The Transport Agency says delays are likely.

Traffic remains heavy across Auckland, after bad weather overnight and this morning.

Strong gusts of wind and lightning in the far north also left parts of the region without power last night.

Top Energy reported power outages and faults in the line between Towai and Kaitaia.

The company said on its message line last night that it was working to get lines back up and running.

But it warned the majority of the outages would not be fixed until this morning. 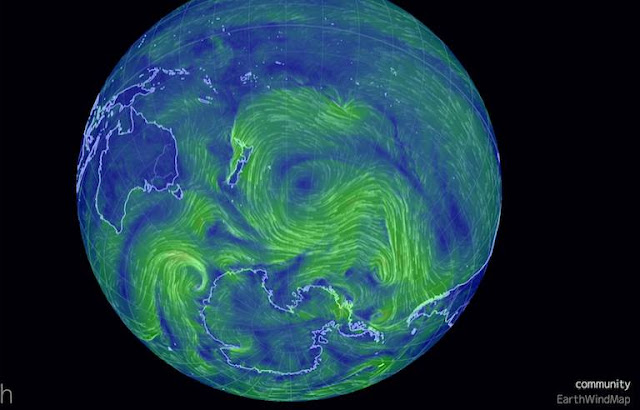 If you are not aware of what a voice of denial sounds like this listen to this interaction
Posted by seemorerocks at 11:24