...and the most dangerous of them all is Hillary Clinton.

Some very good, if politically incorrect, points from Glenn Greenwald on cause and effect in the aftermath of the Brussels terrorism in this DemocracyNow interview.

The key section is below:


What we’ve seen in Brussels is the same exact pattern as we’ve seen, essentially, for the last 15 years each time there is one of these attacks. There is never any sense at all that there’s some balance needed between security, on the one hand, and civil liberties and privacy and a constrained budget for our military and intelligence, on the other. Every single time there’s a terrorist attack—every single time—politicians like Hillary Clinton and Ted Cruz come forward and say we need more of everything we’ve been doing. We need more money for intelligence, more surveillance authorities, more military presence, more security. You know, imagine if every single time there were a fatal car accident, every single time, in response, someone said not, "Well, we accept the fact that in exchange for having roads, we know there’s going to be some fatalities," but instead, every time, said, "We need more safety regulations for cars. We need to lower the speed limit even further." The reality is, in an open society, especially if you have a government that is constantly bombing people around the world, there are going to be people who want to bring back violence to you and who are going to succeed in doing it. You can’t stop people in every case. And it’s not necessarily the case that each time there’s a terrorist attack it means that you need more security measures, more intelligence gathering, and more security and military adventures in the way that politicians just almost reflexively call for.

I think it’s really important to note a couple things about Brussels. Number one is, the Brussels attack is now the fourth straight attack, after Boston, the Charlie Hebdo massacre and then the Paris attacks, where siblings, brothers, were at the heart of the planning. And just like in those three previous attacks that I just referenced, the attacks were carried out by people who live in the same communities, who live very close to one another, and who almost certainly met in person in order to plan them. And yet, the exploitive mindset of Western politicians is to say, every time there’s a successful attack carried out, it means we need to wage war on encryption, we need greater surveillance, we need more police in these communities. But the reality is, if people are meeting in person, if you’re talking about siblings and cousins and family members and people who go to the same mosques, who are meeting in person to plan the attacks, none of that will actually help detect the attack.

What’s amazing is that if you listen to the media narrative about how these attacks get discussed—and I had the misfortune of listening to hours of CNN coverage and MSNBC coverage, because I’m traveling, about these attacks—the one question that’s never asked is "What is the motive of the attackers? Why are people who are in their twenties and thirties willing to sacrifice their lives to kill innocent people in this really horrific way?" And ultimately, it’s not hard to figure out. They say what it is, and it’s really not that difficult, which is the countries that they’re targeting—France and Belgium and the United States and others—are in Iraq and Syria bombing ISIS. And so, of course, it’s just natural to expect—doesn’t mean it’s justified; it’s never justified to target civilians, but it’s natural to expect—that countries that go and bomb ISIS, ISIS is going to want to bomb and attack back, just as the United States, for 15 years, has been declaring itself at war and bombing multiple countries and then acts surprised when people want to come and attack us back.

And so I think, more than saying we need more intelligence and more surveillance and wage war on encryption and more bombing campaigns, we need to be asking whether there are things that we can be doing that reduce the incentive for people to want to kill us—and in the process, kill themselves—and especially the support infrastructure that they get because of the anti-American and anti-European sentiment that gets generated when we engage in all of this violence in the world.

And here, in the context of US foreign policy, is Greenwald's curious take on the distinction between Cruz and Trump:


I do get a little bit disturbed by this widespread notion on the part of a lot of well-intentioned people that Donald Trump is somehow so far outside of what we regard as what had been previously acceptable within American political discourse. I mean, if you look at what Ted Cruz has actually been saying and what he’s been doing, you could certainly make the case—and I would be someone who agrees with this—that Ted Cruz is, in many respects, maybe most respects, more dangerous than Trump. I mean, Ted Cruz is this true evangelical believer who seems to be really eager to promote this extremist religious agenda. You have him constantly expressing animosity toward Islam and toward Muslims in a way that’s sort of redolent of almost a religious-type war. He holds himself out as this constitutional scholar and small-government conservative and yet advocates some of the most extremely unconstitutional measures you could possibly imagine, like targeting American communities filled with Muslims with additional police patrolling and monitoring and surveillance and scrutinizing.

And as far as Donald Trump is concerned, you know, when he comes out and says, "I want to do waterboarding and worse," and we all act so shocked, I mean, as you just said, you know, he almost deserves credit for what he’s saying, in the sense that he’s being more honest. The United States for 10 years did engage in torture. We did use not only waterboarding, but techniques far worse. And the reason why that’s still part of the debate is because the current administration, under President Obama, made the choice not to prosecute any of the people who implemented those techniques and who used to them, despite the fact that we’re parties to treaties requiring their criminal prosecution. And when he did that, he turned torture into nothing more than just a standard partisan political debate.

And that’s why people like Donald Trump are able to stand up without much repercussion and advocate that we use those techniques. But we shouldn’t act all that shocked. The U.S. government did exactly what Donald Trump is advocating as recently as seven or eight years ago.


I think if you look at the reaction to Donald Trump and this kind of horror that even Republican elites and conservatives are expressing when reacting toward him, to call it hypocritical is really to be generous. It is true that he doesn’t use the language of political diplomacy. He doesn’t really use euphemisms. He speaks like ordinary people speak when talking about politics at their dining room table, which is one of the reasons for his appeal. And in that sense, he actually provides an important value, which is he’s stripping away the pretense of what the American political system and American political culture have become and describing it in a much more honest way. And that’s the reason that so many Republican elites and other media figures, who have no problem with Republican politicians or even Democratic politicians who advocate similar policies, why they’re so offended by Donald Trump, because he sort of renders the entire system nakedly candid about what it actually is


This is what he has to say about Hillary Clinton

Sanders takes Washington, Alaska and Hawaii in US Democrat race 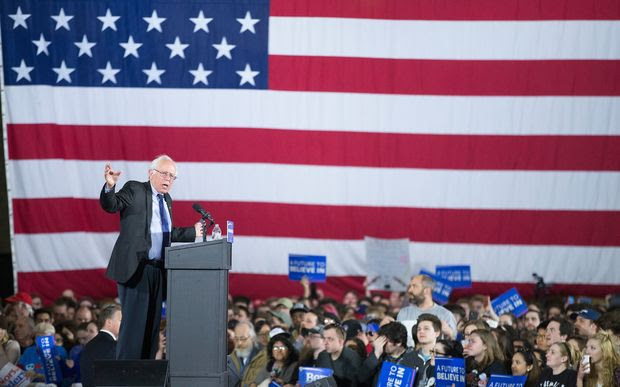 Sanders still faces a steep climb to overtake Clinton but the big victories in the West generated more momentum for his upstart campaign and could stave off calls from Democratic leaders that he should wrap up his bid in the name of party unity.
Sanders appeared headed to victory margins of more than 50 percentage points in both Alaska and Washington, and led by about 40 points in Hawaii with some 90 percent of the results tallied there.

"We are making significant inroads in Secretary Clinton's lead and ... we have a path to victory," Sanders told cheering, chanting supporters in Madison, Wisconsin. "It is hard for anybody to deny that our campaign has the momentum."

Clinton, the former secretary of state, has increasingly turned her attention toward a potential 8 Nov general election showdown against Republican front-runner Donald Trump, claiming she is on the path to wrapping up the nomination.

Heading into Saturday, she led Sanders by about 300 pledged delegates in the race for the 2,382 delegates needed to be nominated at the party's July convention in Philadelphia. Adding in the support of superdelegates - party leaders who are free to back any candidate - she has 1,690 delegates to 946 for Sanders.

Sanders, a US senator from Vermont, needs to win up to two-thirds of the remaining delegates to catch Clinton, who will keep piling up delegates even when she loses under a Democratic Party system that awards them proportionally in all states.

"These wins will help him raise more funds for the next few weeks but I don't think it changes the overall equation," said Democratic strategist Jim Manley, a Clinton supporter. "Hillary Clinton has too big a lead."

But Sanders has repeatedly said he is staying in the race until the convention, pointing to big crowds at his rallies and high turnout among young and first-time voters as proof of his viability.

After raising $US140 million, he has the money to fight on as long as he wants.

He has energized the party's liberal base and young voters with his calls to rein in Wall Street and fight income inequality, a message that resonated in liberal Washington and other Western states. Sanders won in Utah and Idaho earlier this week.

"Don't let anybody tell you we can't win the nomination or the general election," Sanders told supporters in Wisconsin, which holds the next contest on 5 April. "We are going to do both."

All three contests on Saturday were caucuses, a format that has favoured Sanders because it requires more commitment from voters. They also were in states with fewer of the black and Hispanic voters who have helped fuel Clinton's lead.

"He was just more aligned with my values. I am young and I never knew there could be someone like him in politics," said Samantha Burton of Seattle, who said Sanders was the first candidate who had inspired her to make a donation.
Jocelyn Alt, a birthing assistant at a Seattle hospital, said she backed Clinton because she believed the times called for someone who could get things done.
"She knows how to make things happen," she said. "I think Hillary is more likely to win against a Republican."

After Wisconsin, the Democratic race moves to contests in New York on 19 April and a bloc of five states in the Northeast, led by Pennsylvania, on 26 April.
There were no contests on Saturday in the Republican race featuring Trump and rivals US Senator Ted Cruz of Texas and Ohio Governor John Kasich.

On Saturday, the New York Times published a lengthy foreign policy-focused interview with Trump. The New York billionaire told the newspaper he might stop oil purchases from Saudi Arabia unless they provide troops to fight the Islamic State.

Trump also told the Times he was willing to rethink traditional US alliances should he become president.
- Reuters

Desperate to prevent another “Michigan upset”, Hillary found an ingenious way to guarantee victory in Arizona.