More on the western response to the liberation of Palmyra 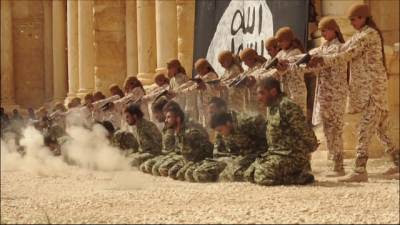 Originally appeared at Zero Hedge
Last May, the world was horrified to learn that the band of marauding, black-flag waving, sword-wielding jihadist desert bandits we all know as the CIA-spawn called ISIS had overrun the ancient city of Palmyra. A UNESCO world heritage site, the city is known for its picturesque ancient ruins and boasts a rich cultural history that brings together Greek, Roman and Persian influences.
The fear - well besides the worry that the militants might murder all the men and enslave the women and children - was that ISIS would destroy the city’s architectural treasures. Those fears were realized in October when reports indicated that the group had blown up the Triumphal Archs, a 2,000 year-old monument that dates back to the Roman empire. Here's a drone flyover of the destruction:

And a before/after contrast:

“It’s a crime in every sense of the word,” Syria’s chief of antiquities said. “All we can do is share the sadness.”

Yes, “a crime in every sense of the word,” but destroying the Arch wasn’t the only “crime” ISIS committed at the city’s vaunted ruins. The militants also put on a rather horrific (if morbidly epic) display in The Roman Theatre where city residents were forced to watch as two dozen teenage ISIS trainees carried out a mass execution of captured SAA soldiers. 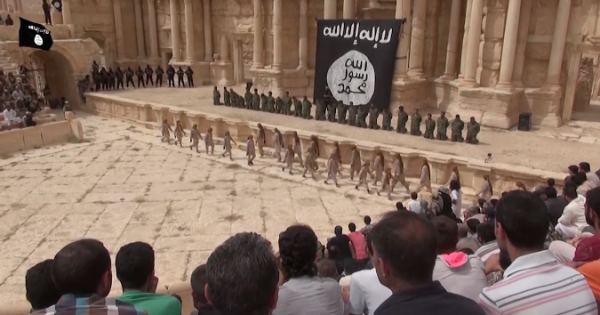 Right. So that's all really, really bad which is why you would think everyone would be happy to learn that the Syrian army - with the help of Russian commandos and Moscow's warplanes - have now entered the city and are on the verge of liberating it from the ISIS scourge. One Russian SpecOps soldier was reportedly killed in the fighting. "The soldier died heroically, calling the strike onto himself after he was discovered and surrounded by terrorists," Interfax said.

"Syrian government forces fought their way into Palmyra on Thursday as the army backed by Russian air cover sought to recapture the historic city from Islamic State (IS) insurgents," Reuters reports. "The state-run news channel Ikhbariya broadcast images from just outside Palmyra on Thursday and said government fighters had taken over a hotel district in the west [while] the British-based Syrian Observatory for Human Rights said the army had advanced into the hotel district just to the southwest of the city and reached the start of a residential area, after a rapid advance the day before brought the army and its allies right up to its outskirts."
So, after nine months in ISIS hands, the Russians, Hezbollah, and the SAA are about to liberate a UNESCO world heritage site from the most brutal jihadist organization the world has ever known. Unequivocally good right?
Not necessarily, according to the US State Dept. Watch below as spokesman Mark Toner tries to explain to reporters why it may be better if ISIS holds onto its territory. "You know I mean look... broadly speaking .... you know... it's not a great choice... an either/or... but... you know..."

Syrian government forces continued to battle Islamic State fighters around Palmyra on Saturday as they pressed their offensive to recapture the desert city from Isis militants, state media and a monitoring group said.

Syrian state television said the army, which drove Isis fighters out of the symbolic and strategic old citadel overlooking the west of the city on Friday, took full control of the northern district of Al-Amiriya.

But the Syrian Observatory for Human Rights said fighting continued in that area, adding that Isis militants had launched counter-attacks – including car bombings – against government forces advancing in the city.

The recapture of Palmyra, which the Islamist militants seized in May 2015, would mark the biggest reversal for Isis in Syria since Russia’s intervention turned the tide of the five-year conflict in president Bashar al-Assad’s favour.

Syrian army and allied militia fighters, backed by heavy Russian and Syrian airstrikes, have been fighting on the edges of the city for several days.

The UK-based observatory, which monitors the fighting through a network of sources within Syria, reported overnight fighting inside Palmyra in the neighbourhoods of Mutaqa’ideen and al-Jami’a.

Television footage from the citadel on Saturday showed a soldier waving a Syrian national flag by the medieval castle walls, while smoke rose from a central city district.

Palmyra had a population of 50,000 according to a census more than 10 years ago. Those numbers were swelled hugely by an influx of people displaced by Syria’s conflict, which has raged since 2011, but most fled when Isis took over.

Recapturing the city would open up eastern Syria, where Isis controls most of the Euphrates Valley provinces of Deir ez-Zor and Raqqa, to the army.

“Our heroic forces are continuing to advance until we liberate every inch of this pure land,” a soldier told state-run television in a broadcast from the slopes of the citadel, which overlooks the city’s Roman-era ruins.

In August, Isis fighters dynamited two ancient buildings, the temples of Bel and Baal Shamin, which had stood as cultural landmarks in Palmyra for nearly two millennia. The United Nations described their destruction as a war crime.

Television footage broadcast in the last 24 hours from the edge of Palmyra has shown some of the city’s structures and famed colonnades still standing, although the extent of any damage was impossible to assess.

Syrian officials said last year they had moved hundreds of ancient statues to safe locations before the city was overrun by Isis.

PS. The Guardian has come up with a SECOND article in 24 hours

‘Palmyra will rise again. We have to send a message to terrorists’
Syrian forces are closing in on the ancient citadel. Now comes the task of assessing the destruction caused by Isis and rebuilding the city’s temples

Palmyra’s famous temples will rise again from the desert sands, Syria’s top archaeologist has promised, as he prepared to inspect how much of the ancient city survived or can be salvaged from the ravages of Islamic State.

“We will not leave the temples destroyed,” Maamoun Abdelkarim, Syria’s director of antiquities, said, as Syrian government troops came closer to retaking one of the most spectacular ancient sites in the world from Isis.