Charles Bausman’s courageous stance against a US propagandist 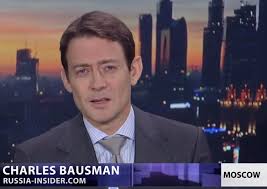 Foreword by The Saker:

I wanted to share with you a remarkable moment on Russian TV.  During the talkshow Special Correspondent Charles Bausman, Editor and Publisher of Russia Insider, had the courage to contradict a fellow American journalist, Michael Bohm, and denounce the propaganda the latter was spewing. Bohm, who is fluent in Russian, is known all over Russia the THE mouthpiece of US propaganda.  Every time a Russian talkshow host wants to get a “typical” (i.e. “official” anddoubleplusgoodthinking) point of view on Russian TV, they invite Bohn, who never disappoints the audience with his unfailing loyalty to the US Empire’s hegemony over the planet. That day, however, Bausman showed the Russian people a totally different kind of American, one which who speaks the truth and is clearly a friend of Russia.  As a result of their Soviet past, it is quite easy for Russian to differentiate between love for one’s country and loyalty to a regime.  They also understand how hard it can be to make the difference between the two.
As somebody who lives in the USA I am very familiar with the manner in which the state propaganda always conflates loyalty and love for country with loyalty and love for the ruling regime and I know that Bausman showed a lot of courage for taking on a fellow American on Russian TV.  There is a Russian saying, “Один праведник спасает город” (one righteous man saves the city).  That evening, Bausman ‘saved’ the USA.
YouTube prevents me from uploading this video on some stupid copyright reason.  So I uploaded on RuTube.  If you understand Russian, just watch the video, if not, the translated script is provided below.
The Saker


Special Correspondent show from March 16, 2016 “Mission accomplished”
(TV Channel Russia)
Transcript:
Evgenii Popov (host): Charles, listening to Michael, one gets an impression that we almost had to make a decision (to withdraw forces from Syria – translator’s note). Michael seems to see it that way. What do you think?
Charles Bausman (American journalist, Chief editor of Russia Insider): Absolutely not. I want to explain to the audience and guests that although I am an American, do not think that all Americans support what their government is doing. America is always referred to as some kind of a monolith. This is absolutely not true. We are all different, and there are many different opinions as we can see.
Evgenii Popov: This is your state policy, Charles, and we are taking it as a guide.
Charles Bausman: There are also different groups there that oppose each other quite strongly . . .
Evgenii Popov: What is your opinion about the events?
Charles Bausman: There is no doubt that Russia won a fantastic victory, diplomatic, military, informational, as well as political. Michael, when you are defending the positions of those terrorists that were killing children and committed atrocities in Syria, as an American, I am ashamed. I do not understand how you can sleep at night with such views?
Michael Bohm (American journalist): I sleep quite well.
Evgenii Popov: I understand. Please, Michael, let him finish.
Michael Bohm: I expected this from Koulikov. Usually, Koulikov says something like that.
Dmitrii Koulikov (a well-known Russian political analyst): I have told him that already, Charles.
Charles Bausman: I am very glad that I am the last one to speak because I have heard everything that was said before, and have some criticism to express regarding your position, my dear Russian friends. I think Dmitrii (Koulikov) was the closest to the truth when he asked who supports these terrorists. Irina Petrovna (Yarovaya – member of the Russian Parliament (Duma); Head of the Duma committee for security and against corruption – translator’s note) and Gennady Andreevich (Zuganov – Head of the Communist Party of Russia; Head of the communist fraction in Duma – translator’s note) said that our chief enemy is the terrorists, and that we have won a major victory against the terrorists. But they are nobodies; they are a small gang of bandits that would not have been able to achieve anything if they had not received massive support from the USA. Yes, from the USA, Michael, from your country, our country.
You have to understand that your enemy is not some terrorists, which are just bums in the desert, like there are bums in poor countries, but very powerful, very rich people waging a war against you. So, I think you have been all too polite here.
Source: http://rutube.ru/video/502ed1043b3cacd2aec7bbbcf7d2e50c/