The Official and Hidden Agenda of Kerry's Visit to Moscow 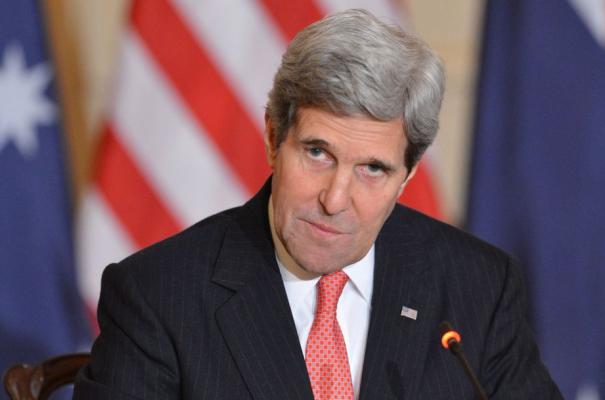 http://www.fort-russ.com/2016/03/the-official-and-hidden-agenda-of.html
US Secretary of State John Kerry has started his March 23rd visit to Moscow. A visit of the head of the America’s foreign policy department to the Russian capital is associated with a sudden withdrawal of most of the Russian military contingent from Syria. As was reported previously by the State Department, the main themes of the talks are the future of Syria and the peace process. It is very likely that the parties will discuss the problem of the future of the country's territorial structure.
Unilateral federalization

On March 17th, there was another significant event, where the Kurds of the north of Syria announced the conversion of areas under their control into a federal region. The government in Damascus, like most of the Syrian opposition, condemned the move. "Federalization of Syria" via the country's partition along the lines of the civil war, which will increase tensions in the relationship between the ethnic and religious communities, will mean the destruction of a unified Syrian state and the actual collapse of the country, like what happened in neighboring Iraq.
Moreover, the partition of Syria will trigger a disintegration process, which will strike other national states in the Middle East, creating a zone of bloody chaos.  Only two countries will benefit from the results of the process.

The US officially condemned the unilateral actions of the Kurds, but they are however a beneficiary to it. By instigating this process, the United States will be able to simultaneously weaken some opponents. The disintegration of Syria and Iraq will lead to the radicalization of the local Sunnis and the formation of statehood akin to ISIS. This will create serious problems for Iran and will cut the Shia crescent, dividing Iran and the Shiite part of Iraq and Palestine from the Mediterranean. Extremists will also pose a threat primarily to Europe and Russia. There is the possibility for attacks in the United States, but they are not critical to the security of the country. Streams of refugees who continue to flee to Europe will weaken it and make it dependent on the US in terms of security.
The United States, who are actively using the Kurdish factor, will have an opportunity to gain a foothold in Syrian Kurdistan, where the US’ military already holds Rmeylan airport.  The US, by using the Kurdish factor, will be able to destabilize and blackmail Turkey, Iraq, and Iran. The region is strategically important, as it has access to the Levant, Turkey, Iraq, Iran, and the Southern Caucasus.
Israel is also profiting from its opponent’s state of weakness; instead of a strong and united anti-Israel Syria, it will face a conglomerate of smallholdings that are fighting with each other. The same is true with respect to other Arab states. The more unstable their internal situation - the less likely they are to intervene in the affairs of the Zionist entity in Palestine. Large, stable, but anti-Zionist Arab and Muslim states are more dangerous to Israel than terrorist organizations, even the most radical ones.
Why the United States did not support the Kurds

Despite the fact that the State Department hastened to declare that the action does not support the Kurds, the idea of federalization of Syria is American. It is supported by such influential thinkers in international affairs as Henry Kissinger, former US Secretary of State, and Richard N. Haas, President of the influential globalist Council on Foreign Relations.
It is thanks to the representatives of the United States that this previously marginal concept is being widely discussed. However, officially, Washington does not support this concept regarding Kurdish activities. The reasons for this may include the following:
1) US’ allies in the Persian Gulf, the EU, and Turkey understand the danger of this scenario. Therefore, the US is trying to reassure them, and in fact, continues to encourage the Kurds. The fact that the US support for Syrian Kurds has not diminished, and US Special Forces are in no hurry to leave the base they have occupied, is indirect evidence of the correctness of this thesis.
2) The United States seeks to promote the federalization project as an all-Syrian initiative, rather than the result of separate activities of one ethnic group. In this case, someone else will hurry the Kurds. Most likely, this will be Israel, which recently demonstrated its discontent with weak Washington politics and vested interest in aiding the irreversible collapse of Syria.
3) This is an independent decision of the Kurds, which they took without paying attention to the external power center.

The inclusion of the Kurds in the negotiation process

It is known that the Syrian Kurds have maintained close communication on the one hand with the United States and Israel, and on the other - with Russia. It is likely that the problem of the federalization of Syria and the special rights of the Kurdish region will be the main focus of Kerry’s talks in Moscow. A united and allied Syrian state is in the interests of Russia, but there is evidence that Moscow does not oppose the plans to federalize Syria.
Further complicating the process is the fact that although the Kurds were asked to decide the fate of Syria jointly with other parties to the conflict at the Geneva talks, their representatives were not present due to the position of Turkey and Saudi Arabia. Both the US and Russia for their own reasons (Russia exerting pressure on Turkey) will discuss their possible inclusion in the Kurdish talks. The first round of negotiations is to be completed on March 24th, and if it does not include the Kurds, it is difficult to expect it to be fruitful.
Russia’s bargaining chip

The way in which the withdrawal of Russian troops was decorated in Syria (the withdrawal of troops, but not all, maintaining bases, military advisers, part of the engineering and PMC) gives Russia the opportunity to use quantitative parameters of withdrawal as an instrument in the negotiation process. Apparently, Kerry would like to discuss this issue. Russia may require concessions to both Syria (structure of the country, the future of Assad, preserving Russian bases after coming to power of the new leadership), and on other issues, particularly Ukraine.
Ukrainian factor

Not coincidentally, two days before, Kerry said that the issue of Ukraine, as well as Syria, would be key in the negotiations with Russia. At the same time, on March 23rd-24th the German Foreign Minister Frank-Walter Steinmeier will be in Moscow to discuss the situation in the east of Ukraine with his Russian counterpart. The coincidence of the visits is not accidental. It is necessary to wait for Moscow, in response to a proposal to put pressure on Kiev’s violations of the Minsk agreements, to propose to make some concessions on Ukraine in exchange for the weakening or removal of a part of the sanctions.
However, if such a proposal is made, it will come from Germany. In contrast to Europe, Americans are not interested in resolving the conflict or lifting any sanctions. On March 17th, State Department spokesman John Kirby said that sanctions against Russia would not be removed until it gives up Crimea. Earlier, Victoria Nuland expressed the view of the State Department on the situation in southeastern Ukraine, saying that the goal of the United States is to return the space of the People's Republics of Donbass to Ukraine until the autumn of 2016. It is likely that the Kremlin will be offered a "compromise" in Ukraine: the autonomy of the Donetsk and Lugansk Republics in exchange for the resumption of the Ukrainian authorities’ control abroad. It is understood that afterwards, the Ukrainian border guards will be able to cut off Russia from the border of the region, which, if it is accepted, will drown Donbass in blood. Therefore, it is unlikely to achieve a significant compromise in the negotiations on Ukraine.

Contrary to the real interests

Despite all of the above it is likely that on some issues Russia can make concessions contrary to the national interests of the country as a great world power. The reason is an interpretation of the national interests of the country by part of the Russian elite in terms of so-called "Peripheral realism." Peripheral realism is satisfied with the status of ‘regional power’. It is not opposed to global hegemony and sets as the main goal the maximization of national interests by following in the footsteps of the hegemonic power (in the case of the United States), or entering into an agreement with it. In terms of peripheral realism, Russia can renounce some positions in Syria and Ukraine, and even more so in other less important regions of the world in exchange for the sake of relations with the United States and in the hope that the US will make concessions on its side.
In the struggle for hegemony

The United States, in turn, is not prepared to make major concessions. In terms of its logic, Russia is not a regional power, which simply wants to improve its status, but is a country, which is trying to challenge US global hegemony; therefore Russia must be cut down to size. The US would like to see the withdrawal of Russian troops from Syria as a defeat for Russia.

The real purpose of Kerry’s visit is to shape this decision into a real Russian defeat. The US has no room for concessions on Syria, or Ukraine. At stake is the status of a global hegemon, which tried to intentionally or unintentionally challenge Russia. So the US needs to demonstrate the superiority of the US and undermine the efforts of opponents to elevate their status in international affairs. Unlike the neocons, which say the same openly, the Democrats, and Kerry in particular, do not express it directly to Russia’s leaders, but they act in the frame of such thinking.
Posted by seemorerocks at 18:29