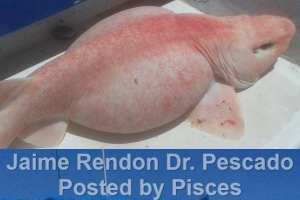 Pisces Sportfishing Fleet, Mar 29, 2016 (emphasis added): ALIEN FISH IN CABO? Jaime Rendon is the well known and liked local captian [sic] of the panga Dr. Pescado; he is also a great fisherman… he caught this strange creature off of Cabo today. It appears to be some kind of shark. He realized it was something special and RELEASED it him/her back into the Sea… Photos have been sent to local experts to try and find out what it is. 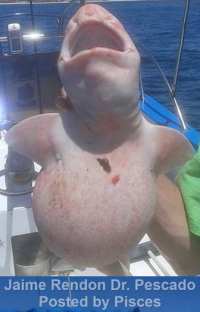 Pete Thomas (former reporter for The Los Angeles Times), Mar 30, 2016: Mysterious, alien-like shark caught off Cabo San Lucas— A Cabo San Lucas sportfishing captain on Tuesday reeled from the depths a mysterious alien-like fish that somewhat resembles an albino shark, or shark fetus. But the bizarre-looking fish, with a distended stomach, was said to be alive when it was caught…

The photos appeared Tuesday night on the Pisces Sportfishing Fleet’s Facebook page, under the heading, “ALIEN FISH IN CABO?”… Tracy Ehrenberg, Pisces general manager, has sent thephotos to biologists in Mexico, and we’ve sent out inquiries as well, hoping to obtain an identification. The shark – or shark-like fish – is somewhat reminiscent of the infamous one-eyed “Cyclops” shark caught in the Sea of Cortez in [July] 2011… the shark fetus was pulled from either a bull or dusky shark…

Wire Service, Dec 4, 2014: Vet Urges Research into Albino Dolphins Captured in Taiji, Japan — Dr. Luca Giovagnoli [a Veterinary Medicine Surgeon] is urging further research into the impact of the Fukushima nuclear disaster on marine mammals, after three white dolphins were captured in close succession… Albino dolphins are exceedingly rare in the wild, yet in the last 12 months, three white dolphins have been captured… “There are not many albino animals among cetaceans,” said Dr. Luca Giovagnoli, DVM, “and they are not all concentrated in one area.”… According to NOAA Fisheries, there have only been 14 recorded sightings of albino bottlenose dolphins since 1962… “This in itself is already a rare phenomenon,” the vet explained, “but when you tie the capture of many “genetically altered” subjects together we must consider other events. One of the probable causes of these genetically altered subjects must be researched in the Fukushima nuclear нdisaster.”