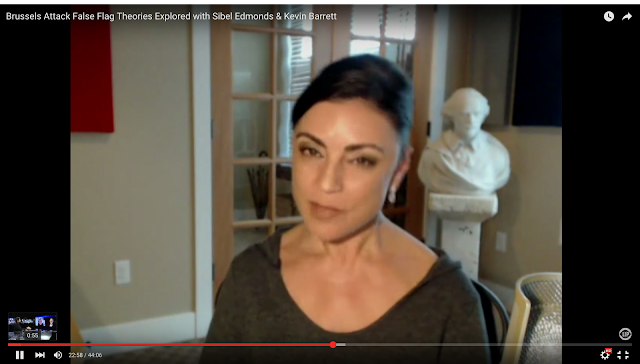 Was Brussels a false flag terror attack that has been blamed on ISIS by Europe, the US, and Israel?

We explore the familiar playbook of the “terrorists” in Belgium, connect the dots with Paris, 9/11, and Operation Gladio in this uncensored discussion with Sibel Edmonds and Kevin Barrett.

How has the target on Syria and Assad allowed for acceptable civilian casualties in Europe, and what threat does ISIS really hold? Enter the Buzzsaw with Sean Stone and find out.

Sibel Edmonds is editor and publisher of Boiling Frogs Post, founder and president of the National Security Whistleblowers Coalition (NSWBC), and author of the acclaimed book Classified Woman: The Sibel Edmonds Story, and a Political Spy Thriller, The Lone Gladio. She has appeared on national radio and TV as a commentator on matters related to whistleblowers, national security, and excessive secrecy & classification, and has been featured on CBS 60 Minutes, CNN, MSNBC, NPR, and in the New York Times, Washington Post, Vanity Fair, The American Conservative, and others.

Kevin Barrett is the author of Questioning the War on Terror: A Primer for Obama Voters; Truth Jihad; A Guide to Mysterious San Francisco; and editor of 9/11 and American Empire v.2, and has taught Arabic, Islamic Studies, French, American Civilization and others subjects. Widely regarded as the world's leading Muslim 9/11 truth activist (for what that's worth) he spent 2006-2008 as the only talk show host featured on all three leading patriot radio networks (GCN, RBN, and WTPRN). Garrett ran for Congress in Wisconsin's 3rd District in 2008.