Another bit of modelling that fails to take into account positive feedbacks or the exponential function.

But it HAS made the news on Radio NZ.

Antarctic melt impact 'underestimated' - Global sea levels could rise by more than double the current best estimate, according to a new analysis of climate change in Antarctica. 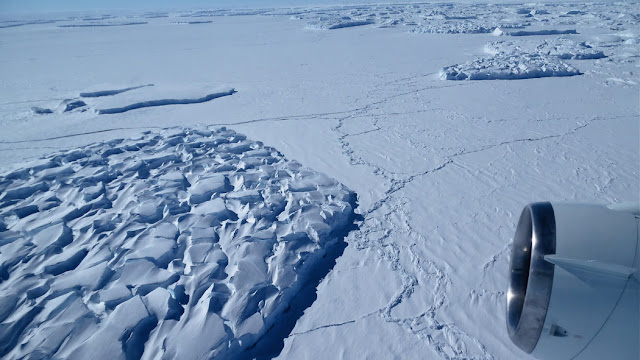 For half a century, climate scientists have seen the West Antarctic ice sheet, a remnant of the last ice age, as a sword of Damocles hanging over human civilization.

The great ice sheet, larger than Mexico, is thought to be potentially vulnerable to disintegration from a relatively small amount of global warming, and capable of raising the sea level by 12 feet or more should it break up. But researchers long assumed the worst effects would take hundreds — if not thousands — of years to occur.

Now, new research suggests the disaster scenario could play out much sooner.

Continued high emissions of heat-trapping gases could launch a disintegration of the ice sheet within decades, according to a study published Wednesday, heaving enough water into the ocean to raise the sea level as much as three feet by the end of this century.

With ice melting in other regions, too, the total rise of the sea could reach five or six feet by 2100, the researchers found. That is roughly twice the increase reported as a plausible worst-case scenario by a United Nations panel just three years ago, and so high it would likely provoke a profound crisis within the lifetimes of children being born today. 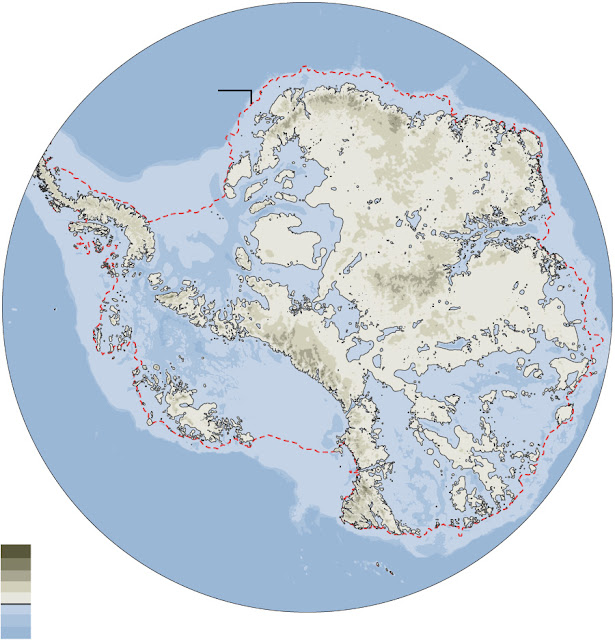 Under the Ice Sheet

The vast West Antarctic ice sheet sits on bedrock that dips thousands of feet below sea level. New computer simulations suggest that the warming atmosphere and ocean could attack the ice sheet from above and below, causing sea levels to rise much faster than previously thought.


The situation would grow far worse beyond 2100, the researchers found, with the rise of the sea exceeding a pace of a foot per decade by the middle of the 22nd century. Scientists had documented such rates of increase in the geologic past, when far larger ice sheets were collapsing, but most of them had long assumed it would be impossible to reach rates so extreme with the smaller ice sheets of today.

“We are not saying this is definitely going to happen,” said David Pollard, a researcher at Pennsylvania State University and a co-author of the new paper. “But I think we are pointing out that there’s a danger, and it should receive a lot more attention.”

The long-term effect would likely be to drown the world’s coastlines, including many of its great cities.

New York City is nearly 400 years old; in the worst-case scenario conjured by the research, its chances of surviving another 400 years in anything like its present form would appear to be remote. Miami, New Orleans, London, Venice, Shanghai, Hong Kong and Sydney, Australia, are all just as vulnerable as New York, or more so.

In principle, coastal defenses could be built to protect the densest cities, but experts believe it will be impossible to do that along all 95,000 miles of the American coastline, meaning that immense areas will most likely have to be abandoned to the rising sea.

The new research, published by the journal Nature, is based on improvements in a computerized model of Antarctica and its complex landscape of rocks and glaciers, meant to capture factors newly recognized as imperiling the stability of the ice.

The new version of the model allowed the scientists, for the first time, to reproduce high sea levels of the past, such as a climatic period about 125,000 years ago when the seas rose to levels 20 to 30 feet higher than today.

That gave them greater confidence in the model’s ability to project the future sea level, though they acknowledged that they do not yet have an answer that could be called definitive.

“You could think of all sorts of ways that we might duck this one,” said Richard B. Alley, a leading expert on glacial ice at Pennsylvania State University. “I’m hopeful that will happen. But given what we know, I don’t think we can tell people that we’re confident of that.”

Dr. Alley was not an author of the new paper, though it is based in part on his ideas about the stability of glacial ice. Several other scientists not involved in the paper described it as significant, with some of them characterizing it as a milestone.

But those same scientists emphasized that it was a single paper, and unlikely to be the last word on the fate of West Antarctica. The effort to include the newly recognized factors imperiling the ice is still crude, with years of work likely needed to improve the models.

Peter U. Clark of Oregon State University helped lead the last effort by a United Nations panel to assess the risks of sea level rise; he was not involved in the new paper. He emphasized that the research, like much previous work, highlighted the urgency of bringing emissions of carbon dioxide and other greenhouse gases under control.

It was his panel that had estimated an upper limit of three feet or so on the likely sea level rise in the 21st century, while specifically warning that a better understanding of the vulnerability of Antarctic ice could change that estimate.

The new research is the work of two scientists who have been at the forefront of ice-sheet modeling for years. They are Robert M. DeConto of the University of Massachusetts, Amherst, and Dr. Pollard, who is a colleague of Dr. Alley’s at Penn State.

In a lengthy interview on Monday, Dr. DeConto recounted years of frustration. The computer program he had built in a long-running collaboration with Dr. Pollard showed increasing sophistication in its ability to explain the behavior of ice sheets, but it had some trouble analyzing the past.

Unless global temperatures were raised to unrealistic levels, the model would not melt enough ice to reproduce the high sea levels known to have occurred in previous periods when either the atmosphere or the ocean was warmer. The ability to reproduce past events is considered a stringent test of the merits of any geological model.

“We knew something was missing,” Dr. DeConto said.

The new idea came from Dr. Alley. He urged his colleagues to consider what would happen as a warming climate attacked huge shelves of floating ice that help to protect and buttress the West Antarctic ice sheet.

Smaller, nearby ice shelves have already started to disintegrate, most spectacularly in 2002, when an ice shelf the size of Rhode Island, the Larsen B shelf, broke apart in two weeks.

The West Antarctic ice sheet sits in a sort of deep bowl that extends far below sea level, and if it loses its protective fringes of floating ice, the result is likely to be the formation of vast, sheer cliffs of ice facing the sea. These will be so high they will become unstable in places, Dr. Alley said in an interview, and the warming atmosphere is likely to encourage melting on their surface in the summer that would weaken them further.

The result, Dr. Alley suspected, might be a rapid shrinkage as the unstable cliffs collapsed into the water. Something like this seems to be happening already at several glaciers, including at least two in Greenland, but on a far smaller scale than may be possible in West Antarctica.

When Dr. DeConto and Dr. Pollard, drawing on prior work by J. N. Bassis and C. C. Walker, devised some equations to capture this “ice-cliff instability,” their model produced striking results.

The obvious next step was to ask the model what might happen if human society continues to warm the planet by pouring huge amounts of greenhouse gases into the atmosphere.

The answer the scientists got is described in their paper in the dry language of science, but it could easily serve as the plot device of a Hollywood disaster movie. They found that West Antarctica, which is already showing disturbing signs of instability, would start to break apart by the 2050s.

Vulnerable parts of the higher, colder ice sheet of East Antarctica would eventually fall apart, too, and the result by the year 2500 would be 43 feet of sea level rise from Antarctica alone, with still more water coming from elsewhere, the computer estimated. In some areas, the shoreline would be likely to move inland by miles.

The paper published Wednesday does contain some good news. A far more stringent effort to limit emissions of greenhouse gases would stand a fairly good chance of saving West Antarctica from collapse, the scientists found. That aspect of their paper contrasts with other recent studies postulating that a gradual disintegration of West Antarctica may have already become unstoppable.

But the recent climate deal negotiated in Paris would not reduce emissions nearly enough to achieve that goal. That deal is to be formally signed by world leaders in a ceremony in New York next month, in a United Nations building that stands directly by the rising water.