Although this appeared in the NZ Herald it comes from an American source, AP. There is NO, I repeat, NO reporting on this internally. Last year there was a scientific report on the melting of the glaciers but it appeared in Australia’s the Conversation.

New Zealanders will have absolutely NO idea that this is happening and no one is going to tell them. 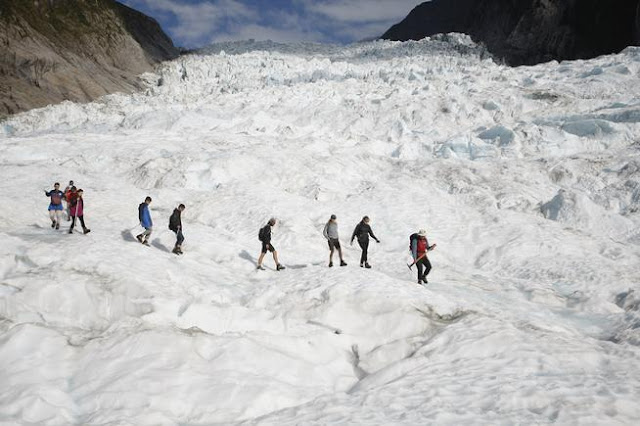 Tourists on a helicopter trip hike the Fox Glacier in New Zealand. The Fox and Franz Josef glaciers are melting at such a rapid rate that it has become too dangerous for tourists to hike onto them from the valley floor, ending a tradition that dates back a century.(The Associated Press)
NZ Herald,
17  March, 2016

FRANZ JOSEF GLACIER, New Zealand — New Zealand is renowned for its wondrous scenery, and among the country's top tourist attractions are two glaciers that are stunning and unusual because they snake down from the mountains to a temperate rain forest, making them easy for people to walk up to and view.
But the Fox and Franz Josef glaciers have been melting at such a rapid rate that it has become too dangerous for tourists to hike onto them from the valley floor, ending a tradition that dates back a century. With continuing warm weather this year, there are no signs of a turnaround. Scientists say it is another example of how global warming is impacting the environment.
Tourism in New Zealand is booming, and nearly 1 million people last year flocked to get a glimpse of the glaciers and the spectacular valleys they've carved. But the only way to set foot on them now is to get flown onto them by helicopter.
Tour operators offer flights and guided glacier walks, although logistics limit this to 80,000 tourists per year, half the number that once hiked up from the valley floor. Up to an additional 150,000 people each year take scenic flights that land briefly at the top of the glaciers.
Flying in the UNESCO World Heritage area comes with its own risks, highlighted in November when a sightseeing helicopter crashed onto the Fox Glacier, killing all seven aboard.
Sitting near the base of the Franz Josef Glacier, Wayne Costello, a district operations manager for the Department of Conservation, said that when he arrived eight years ago, the rock he was perched on would have been buried under tons of ice. Instead, the glacier now comes to an end a half-mile farther up the valley.
"Like a loaf of bread shrinking in its tin, it's gone down a lot as well," Costello said. "So it's wasted away in terms of its thickness, and that's led to quite a rapid melt."
Because of that melt, the valley walls that once were braced by the glaciers have been left exposed and vulnerable to rockfalls, making hiking up too dangerous. Tour operators stopped taking guided hikes onto the Franz Josef in 2012 and the nearby Fox in 2014.
A 2014 paper published in the journal Global and Planetary Change concluded the two glaciers have each melted by 1.9 miles in length since the 1800s, making them about 20 percent shorter. The glaciers recently have been melting at a faster pace than ever recorded, the authors said.
Heather Purdie, a scientist at the University of Canterbury and lead author of the paper, said climate change is the driving factor.
"We know that glaciers around the world, including the Fox and Franz Josef glaciers, are responding to that warmer temperature and they're retreating," she said. Small changes in temperature and snowfall tend to be magnified in the two glaciers, and their retreat has been interrupted by advances that can last years, she said.
Costello and tour operators are hoping to see another advance soon. But there's no sign of that: February was the second-hottest month ever recorded in New Zealand.
The hot weather has even created a new type of tourist attraction over the other side of the mountains. Purdie said the glaciers there also are retreating rapidly, resulting in tourists taking boat rides on the lakes to see some of the massive icebergs that have begun to shear away.
A helicopter trip onto the Fox Glacier reveals deep crevasses in the translucent blue ice and stunning ice caves through which guides take crampon-wearing tourists. A guide retells the indigenous Maori legend that the Franz Josef Glacier began as a stream of tears left by a young woman whose lover was killed by an avalanche.
The glaciers are formed by prevailing westerly winds dumping snow in a high-altitude basin. It compacts into ice and is pushed down the valleys much like toothpaste being squeezed from a tube.
The glaciers slide and roll down the mountain at a rate of 13 feet each day, picking up rocks and debris along the way.
"It's the uniqueness, the rawness of the environment," that draws tourists from Australia, North America, Europe and, increasingly, China, said Rob Jewell, chairman of the Glacier Country Tourism Group.
It's also a region subject to rapid changes in the weather. At the time of November's helicopter crash — which killed four tourists from Britain and two from Australia plus the New Zealand pilot — some observers said the weather and visibility were marginal.
Jewell said he didn't want to comment until an investigation by authorities is complete. He said the crash hasn't affected tourist numbers, which have been stronger than ever this year.
At the base of the Franz Josef, Dutch tourist Dieuwke Derkse said she was overwhelmed by the beauty of the glacier and the purity of the environment.
She said she believed global warming was responsible for its retreat and felt a little guilty even visiting New Zealand because of the fossil fuels burned by the plane ride there. But she said the glacier helped inspire her to live in a more environmentally conscious way.