Earlier today, we brought you the official statement in which ISIS claims responsibility for the attacks that left 34 people dead in Brussels on Tuesday. The group promises “black days for all crusader nations” and an attack “more devastating and bitter” than those that have come before (“Allah permitting,” of course).

Paris fugitive Salah Abdeslam has been variously characterized as the “ringleader” of the cell that was behind this week’s attack on Brussels. That’s probably because he’s now a household name in Europe and officials want the public to think a kind of field general has been captured. In reality, Abdeslam aborted his martyrdom mission in Paris and got himself arrested instead of dying for the “cause.” That’s not exactly behavior consistent with that seen in confirmed commanders like Abdelhamid Abaaoud and Omar al-Shishani. Rather, it would appear that Abdeslam effectively inherited Abaaoud’s cell upon returning to Belgium after backing out of the Paris attacks. ISIS likely saw some utility in keeping him around and Tuesday’s bombings suggest retaining him as a kind of organizer was a prudent decision. Or perhaps he was never meant to die in Paris.

Whatever the case, the important takeaway from Tuesday would appear to be that Abaaoud’s cell continued to operate and expand five months after his death and indeed, the group appears to have been using at least one of the very same bomb makers, Najim Laachraoui (who, incidentally, authorities now claim died in the Brussels airport).

Here’s what we said just this morning:


The thinking now is that ISIS cells have been given a certain amount of autonomy from central command in Raqqa and Mosul because, well, because there's really no telling if there even is a central command at this juncture. One gets the impression that al-Hayat Media Center just kind of waits to see what happens and then if there's a "successful" attack (Allahu akbar), then the propaganda arm simply claims it after the fact.

That dynamic in many ways makes the group more unpredictable, as semi-autonomous cells do not need al-Baghdadi's approval before carrying out attacks.

In reality it's probably not a more spectacular attack that Belgians should fear, but rather a series of "small" attacks like what unfolded Tuesday, perpetrated by a collection of individuals who do not need to appeal to a central authority and thus are free to hit soft targets spontaneously.


So if you were looking for analysis on the state of the group’s thinking and their operational capacity as it relates to attacks in Western Europe, you could have simply read the above or, you could have consulted with European and Iraqi intelligence officials and a French lawmaker, who together - and presumably after countless hours of hand wringing over chatter gathered from surveilling jihadist chatter - came to exactly the same conclusion. Here’s AP:


Security officials have told The Associated Press that the Islamic State group has trained at least 400 attackers and sent them into Europe for terror attacks.

The network of interlocking, agile and semiautonomous cells shows the reach of the extremist group in Europe even as it loses ground in Syria.

The officials, including European and Iraqi intelligence officials and a French lawmaker who follows the jihadi networks, describe camps designed specifically to train for attacks against the West.

The officials say the fighters have been given orders to find the right time, place and method to carry out their mission.

Right. So exactly what we said this morning and precisely the conclusion that anyone who closely monitors the evolution of Sunni terror networks would have come to some 12 months ago after a police raid in Verviers proved beyond a shadow of a doubt that what happened at the Jewish Museum of Belgium in May of 2014 was no isolated event.

In any event, since AP has reported it, it's now officially true we suppose, which means there are 400 well-trained Islamic State fighters embedded throughout Europe and organized into semi-autonomous cells (let's call them proto-caliphates) just waiting for the "right" time and place to strike.

For any "intelligence" officials who may read this we would only add one thing: there are probably a whole lot more than 400.. 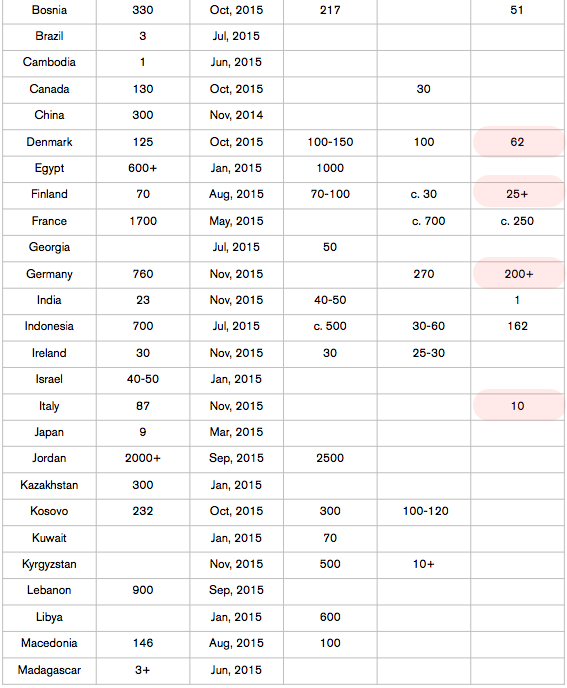 Explosive Accusation: Belgium Had "Advance And Precise" Warning About Terrorist Attacks, Did Nothing

In what, if true, is the most incendiary allegation of the day, Israel's Haaretz newspaper reports that Belgian security services and other Western intelligence agencies had "advance and precise intelligence warnings"regarding Tuesday’s bombings. According to the paper, "the security services knew, with a high degree of certainty, that attacks were planned in the very near future for the airport and, apparently, for the underground railway as well."

Here is the full Haaretz report:


The Belgian security services, as well as other Western intelligence agencies, had advance and precise intelligence warnings regarding the terrorist attacks in Belgium on Tuesday, Haaretz has learned.

The security services knew, with a high degree of certainty, that attacks were planned in the very near future for the airport and, apparently, for the subway as well.

Despite the advance warning, the intelligence and security preparedness in Brussels, where most of the European Union agencies are located, was limited in its scope and insufficient for the severity and immediacy of the alert.

As far as is known, the attacks were planned by the headquarters of the Islamic State (ISIS) in Raqqa, Syria, which it has pronounced as the capital of its Islamic caliphate.

The terror cell responsible for the attacks in Brussels on Tuesday was closely associated with the network behind the series of attacks in Paris last November. At this stage, it appears that both were part of the same terrorist infrastructure, connected at the top by the terrorist Salah Abdeslam, who was involved in both the preparation for the Paris attacks and its implementation.

Abdeslam escaped from Paris after the November attacks, hid out in Brussels and was arrested last week by the Belgian authorities.

Abdeslam's arrest was apparently the trigger for Tuesday's attacks, due to the concern in ISIS that he might give information about the planned attacks under interrogation, particularly in the light of reports that he was cooperating with his captors.

The testimony of the detained terrorist, alongside other intelligence information, part of which concerned ISIS operations in Syria, should have resulted in much more stringent security preparedness in crowded public places in Brussels, along with a heightened search for the cell.

f this report is accurate, it leads to many unpleasant and frankly disturbing questions for both local as well as international authorities, like why in the aftermath of the Salah Abdeslam capture did Belgium not at least issue a heightened state of alert, as it did in November in the aftermath of the Paris bombings, when overnight Brussels looked like an army ghost town; at least it was safe.

Recall from our November report of how Brussels looks like a warzone after the Paris terrorist attack:

This time, however, the local police did nothing and the result was over 30 deaths and hundreds of injuries.

What's worse as of this moment the third suspect remain at large: as Haaretz reminds us, "the search is focused on the terrorist Najim Laachraoui, who created the explosive vests used by the bombers and escaped from the airport at the last moment."

There is concern, however, that other cells connected to ISIS in Western Europe will attempt to carry out additional attacks in the near future, either in Belgium or in other countries involved in the war against the terror organization in Syria and Iraq.

How Europe will handle the ongoing deadly fallout from the bursting of this one terrorist cell, will be closely watched, and should Tuesday's event recur when local authorities had been warned about an upcoming terrorist attack leading to no specific action, perhaps some will finally ask if the local governments were at least partially complicit in the deaths of dozens of innocent people, for motives first hinted at in that infamous 2008 AIG Banque presentation which has so far predicted with absolute accuracy the future of the Eurozone.