Wildfires Are Burning Some of the World’s Oldest Trees 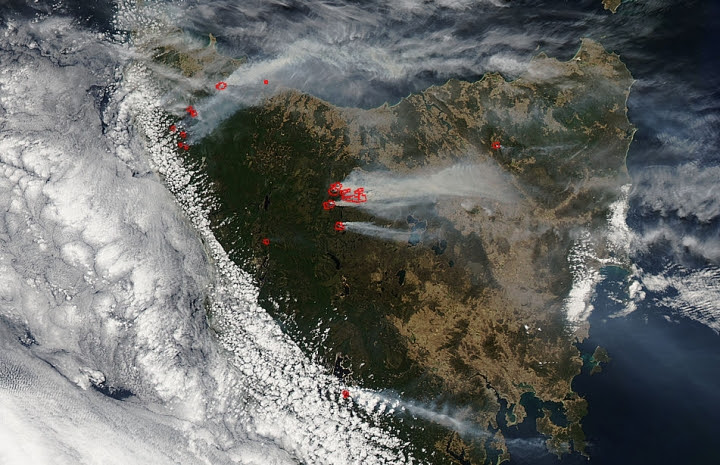 More than 89,000 acres have burned since lightning ignited around 100 bushfires early last week. They were sparked in the wake of the driest spring on record for the region.

El Niño likely played a role in that record as the climate phenomenon usually dries out Tasmania and the eastern part of Australia.
However, rainfall deficits stretch back much further. This is the tail end of the driest 24-month period ever recorded in the region where the fires are burning. Since January 2014, up to 47 inches of rainfall has gone missing. That’s the equivalent of half a year’s rain.
There’s also a background signal of decreasing rainfall since 1970 across Tasmania, further impacting ecosystems. Those rainfall deficits both have little to do with El Niño, which only really got ramped up this year.

This is the background that has created favorable fire conditions, the likes of which are rarely seen in a rainforest. Temperatures have been 3.6°F (2°C) above average over the past month, further drying out fuels. It’s all these layers that have created extreme fire conditions in a place known more for extreme rainfall.
Northwest Tasmania is dealing with the most severe two-year rainfall deficit ever recorded.
Credit: Australia Bureau of Meteorology

“I am of the view this is climate change,” David Bowman, a forest ecologist at the University of Tasmania, said in an email.


Because fire is so rare in these temperate rainforests, the trees that live there are ill-adapted to deal with large blazes. So when the current fires lit up, they attacked a forest with few natural defenses, like a bully coming for your lunch money.

When the fires die down to embers, they’ll leave behind a landscape vastly different than the one before it. Trees like the King Billy Pine and fagus — a beech tree and the only winter-deciduous tree in Australia — could be burned out of their range on Tasmania.
These trees have spent millions of years adapting to slow climate changes. But the current rate of change is unlikely anything the world has seen in millions of years.
Temperatures could rise up to 9°F (5°C) by the end of the century if human greenhouse gas emissions aren’t slowed. That rate would be faster than the climate has changed in at least 65 million years and would leave not just Tasmania but the rest of the world’s ecosystems forced to cope with a radical new normal. 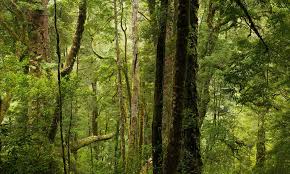 A global tragedy is unfolding in Tasmania. World heritage forests are burning; 1,000-year-old trees and the hoary peat beneath are reduced to char. 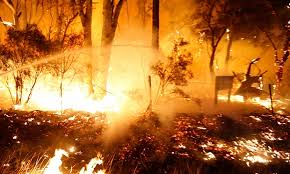 The fires were preceded and aggravated by the coincidence of two natural climate events – the Indian Ocean dipole and the Pacific El Niño. The cooling of the east Indian Ocean caused Tasmania’s usually drenching spring rains to fail almost completely. El Niño also tends to bring hot, dry summers. These natural phenomena happen on a timeframe of decades, not centuries. Confluences have occurred before, yet the forests did not burn.

On the mainland of Australia and around the world, as the climate warms the occurrence of catastrophic fires is on the rise. One telltale sign of climate change is that these fires were set by storms not people. Lightning was expected to increase under climate modelling, says David Lindenmayer, a professor of ecology and conservation biology at the Australian National University in Canberra.

Between 1993 and 2003, Tasmania’s Parks and Wildlife Service recorded 17 fires started by lightning. In the next decade that number rose to 30. In a fire risk assessment of the world heritage area, the service warned that lightning fires should no longer be viewed as “natural” because of the influence of climate change. It concluded that lightning fires were now the main threat to the survival of the world heritage area.

“Clearly the fire regime is starting to change,” Lindenmayer says. 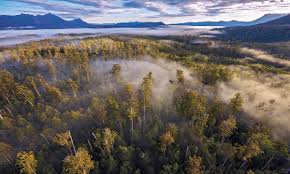 In neighbouring Victoria, major fires that naturally occur every 75 to 120 years have occurred every 20 years, on average, for the past century.

“That’s what other people have been forecasting is going to happen,” Lindenmayer says. “We are going to see more fires, over larger areas, that are more frequent and of higher severity. What we are seeing in Tasmania would appear to be a manifestation of that.

Bowman says: “The implications of this are, of course, goodbye Gondwana. Because Gondwana can’t live in this sort of world.”

Tasmania’s wilderness is to Gondwana, which broke apart 180m years ago, what the Great Barrier Reef is to coral – the most magnificent example of a dwindling wonder. That is why Unesco put a vast swath of the island – 1.5m hectares – on its world heritage list in 1982. Once you account for its Aboriginal heritage, the property fulfils more world heritage criteria than any other site on Earth.

To cross this immensely empty landscape takes weeks. As a child, my parents would often take me on treks among the ethereal alpine forests of Tasmania’s central highlands; where ragged pencil pines sit beside bogs and tarns. I was warned never to tread on the cushion plants. Like the corals of the reef, these communities of tiny plants build upon the dead skeletons of their predecessors to create the kind of bulky, alien green globules that a 10-year-old boy just has to run and jump on. But, in doing so, I’d be destroying hundreds of years of minute architecture. So lightly, reverentially, we trod around them.

As with the world’s corals, climate change is now an immediate threat to the continuity of this geologically paced building project.

The Unesco listing is still considered one of the greatest environmental coups of all time. Victorious campaigners expected the landscape would be protected against human caprice for their great-grandchildren and beyond. Never would it have crossed their minds that the survival of the Gondwanan ecosystem would be threatened in their own lifetimes.

“It’s a bit like knowing someone you love’s got cancer,” he says. “You have to get your mind around the inevitability, I suppose. You grieve. It’s a sadness. It’s going to be pretty hard for this stuff to survive, certainly in the 100-year time frame. It stretches my mind to believe that there’ll be much of this stuff left in 50 years.”

An official from Unesco confirms that there is immediate concern at the agency for the wellbeing of the site and that it has requested information from the Australian government about the fires. But Unesco will not comment on whether it has concerns about the long-term survival of the property under climate change. Unesco was warned about the potential risk that climate change-driven fires posed to the site when it sent a mission to the island in November.

At lower altitudes, outside the world heritage area in the disputed Tarkine wilderness and across the north of the state, old-growth rainforests are also burning. The Tarkine’s ancient copses, which form the biggest rainforest in Australia, are cut through with a patchwork of logged forests. They take centuries to regrow after fire. But Lindenmayer says it is “unequivocal” that logging has put them at greater risk of burning. His research has found that forests logged within the past 40 years burn hotter and more easily than if they had been undisturbed.

“All over the globe you see this kind of thing happening where there are wet forests.”

Geoff Law, a longtime Tasmanian conservationist and former head of the Wilderness Society, describes Bowman’s long-term prognosis for the Gondwanan forests as “devastating”.

“But, in the meantime, there is a tangible crisis requiring a tangible solution – aerial water-bombing capacity,” he says. “Pressure from abroad on the Australian government could help achieve this.”

Tasmanian fire crews are monitoring roughly 100 fires around the state, rightly prioritising the protection of property and life. The former Australian Greens leaders Bob Brown and Christine Milne have written to Malcolm Turnbull’s government calling for remote firefighting assistance from the mainland. (Law, Milne and Brown were all among those who fought the original campaign on the Franklin dam that led to the creation of the world heritage area.)

Brown told the ABC’s Radio National: “Tasmania has just experienced the driest spring in recorded history, then the hottest December. They’ve had almost no rain in January. Everything is hotter and drier, so we are facing unprecedented conditions in human history ... due to the human-caused climate change.”

Posted by seemorerocks at 09:24