Towards the signing of the TPPA 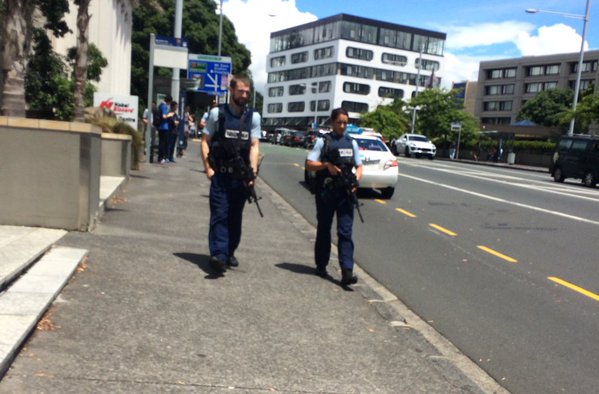 PM John Key made a speech today at the Langham Hotel in Auckland.

This is what was outside.

For background, in this country police are not armed and do not carry arms with them but only in their patrol cars for armed offending situation

This comes before the signing of the TPP Agreement at Sky City casino on 4 February and Key's specially-trained riot squads.

Key’s Slate of the Nation Speech

Usual dross served up with a thin promise of trains. Few media will even notice Key wants to expand more surveillance powers and headlines will focus on the window dressing. Key’s state of the nation was more a checklist of new outrages he intends to get away with than new visions or ideas. He’s currently so popular he could have announced that he’s banning all trains and he’d still win by a sizable majority.
More privatisation into CYFs, state housing and prisons combined with MORE (you read that right) MORE powers to the Police, GCSB and SIS.
Yes. More.
He goes onto explain the 3 magic beans he and Groser have managed to get for the TPPA will be amazing for NZ. Crowd is deathly silent.
He then promised to make Auckland wait 2 years instead of 4 years for a Central Rail Link. Clearly the Government have been convinced that gentrifying public transport will keep the middle classes happy while the poor get squeezed off being able to afford using it at all. So a win win for National.
He spent most of state of the nation speech promising to build bridges to everyone except the poor, the hungry and the desperate.
Usual dross served up with a thin promise of trains. Few media will even notice Key wants to expand more surveillance powers and headlines will focus on the window dressing.
Job done, middle NZ won’t even blink thinking that looming light in the tunnel is the new City Rail Link.

Let’s Not Lose Our Tempers: If John Key wants a riot outside Sky City – don’t give him one the Daily Blog,
22 January, 2016
ON THE FACE OF IT John Key has made a serious tactical blunder. By insisting on hosting the signing of the Trans-pacific Partnership Agreement (TPPA) in New Zealand, just two days before Waitangi Day, at the country’s most notorious beneficiary of crony capitalism, he would appear to have given his opponents an unparalleled opportunity to rally their forces and reinvigorate their campaign.
Frankly, I’m suspicious. Because John Key is not prone to making tactical blunders. Which raises the worrying possibility that the readily predictable consequences of his decision – mass protest action outside Sky City, with a high probability of violence and property damage – may be exactly what he wants to happen.
The Chinese philosopher-general, Sun Tzu, wrote: “If your enemy is of choleric temper – irritate him.”
Few would argue that, at present, the opponents of the TPPA are in a very bad mood indeed. Even fewer would suggest that they have not been extremely irritated by the National Government’s decision to host the official signing of the TPPA at Sky City in Auckland on 4 February.
Is John Key setting them up?
That might be the case if it was within John Key’s power to refuse to host (or, at least, delay) the signing ceremony. To decline this honour (as the NZ Herald describes it) would, however, involve a tremendous loss of face by Key’s government. It was, after all, New Zealand that set the whole process in motion more than a decade ago. It would be an unthinkable humiliation for its government to ask another signatory to host the signing ceremony.

But if Key has no option but to host the signing of the TPPA, he most certainly does have a choice as to where it takes place. Which raises the question: Why Sky City? The ceremony could just as easily have been staged at the exclusive Millbrook Resort outside Queenstown. This was where President Clinton stayed in 1999, and where the Intelligence Directors of the “Five Eyes” nations gathered just a few years ago. Far away from New Zealand’s major cities, and easily defensible by a relatively small number of police and security personnel, the Millbrook Resort would not only have offered splendid “visuals” but also the smallest chance of disruption.
Which brings us back to Sun Tzu.
What does the Prime Minister know, that the people he is goading into besieging the Sky City complex do not know?
My best guess is that over the summer, Key and his pollster, David Farrar, have been drilling down deep into New Zealanders’ thoughts and feelings about the TPPA. Judging by the Government’s actions, this is what they have discovered.
That most New Zealanders are quite relaxed about the TPPA. Any fears Kiwis may have had about it in 2015 were allayed by a combination of Helen Clark’s pre-Christmas endorsement of the agreement, and the mainstream media’s generally positive coverage of the final draft. The media has painted the TPPA as being nowhere near as bad as even some of its supporters feared it would be, and that, overall, it will be of considerable benefit to New Zealand Inc.
It is also highly likely that the polling data has revealed the opponents of the TPPA to also be dyed-in-the-wool opponents of John Key and the National Government. Such people can be used, as they were used in the 2014 “Dirty Politics” furore, to reinforce the prejudices of National supporters, and shift the views of those who describe themselves as being undecided. This is especially likely if they can be manoeuvred into behaving in ways that cause “mainstream New Zealanders” to view them as irrational and potentially dangerous “nutters”.
Something John Key is reported as saying in this morning’s (22/1/16) NZ Herald also makes me think that Farrar’s polling may have revealed that Prof Jane Kelsey is viewed by a majority of New Zealanders as being akin, politically, to Nicky Hager. That is to say, as a left-wing “stirrer” hell-bent on embarrassing the Government. How else should we interpret this morning’s thrust from the Prime Minister:

“I suspect people who are vehemently opposed are, broadly speaking, opposed to free trade agreements because the arguments they have put up have been proven to be incorrect. It doesn’t matter how many times we say Jane Kelsey is actually wrong, in the end she doesn’t want to believe she is wrong, and the people that follow her don’t want to believe that.”

When I read those words, my instant reaction was “uh-oh”. A politician doesn’t dismiss someone of Jane Kelsey’s standing in those terms unless he is pretty damn sure that a majority of the electorate already shares his views.
If that is the case, then an angry protest, or, worse, a violent riot, outside the Sky City complex will rebound, almost entirely, to the Government’s advantage. Not only it will reinforce the prejudices of Key’s supporters, but it will also alienate those who are still making up their mind on the TPPA.
It is, therefore, vitally important that any protest against the signing of the TPPA be absolutely non-violent. Every effort must be made to persuade anyone planning on forming, or joining, some sort of “Black Block”, to refrain from doing so. Masked militants are a gift to agent provocateurs from the security services.

The experience of mass, anti-capitalist protests overseas is that Black Blocks are easily infiltrated and used to supply the mainstream media with the most provocative and violent footage from the protests.

The fight against the TPPA must not be waged on the streets – where John Key wants it to be waged – but in the hearts and minds of those New Zealanders who are still not sure that the agreement will, in the end, be good for their country.
If John Key wants a riot at Sky City, then that’s the very last thing the anti-TPPA movement should give him.

Posted by seemorerocks at 16:37