Putin "most corrupt leader in the world" 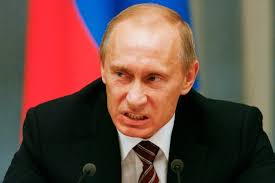 
January 28, 2016 "Information Clearing House" - The most corrupt government on earth, a government so utterly corrupt that it allows former executives of a handful of corrupt mega-banks to run the economic policy of the US solely in the interest of their banks, denying tens of millions of American retirees any interest income on their savings for 7 years and denying hard-pressed Social Security recipients any cost-of-living adjustments by falsifying inflation measures, a government so totally corrupt that it has destroyed seven countries and millions of Muslims solely on the basis of lies, this irredeemably corrupt government has accused the most admired political leader on earth of corruption.

The entire world outside brainwashed America, its EU vassals, and Nazified Ukraine is laughing.

The United States, once admired, then feared, is now the laughing stock of the world. The CIA-controlled German media is being abandoned by the German people who have figured out that their media is nothing but a Washington propaganda operation against Russia. The backlash is so strong that the German media might not survive.
abandon-major-news-sites-anger-over-slanted-russia-coverage/ri885

Phony US Claims About Putin’s Corruption
by Stephen Lendman

Relentless US Putin bashing persists, reckless accusations made – including invading Ukraine and murder, evidence backing up claims absent. None exists.
Putin is vilified for forthrightly defending Russian sovereign independence, supporting a multi-polar world, and challenging Washington’s imperial agenda – at the same time seeking world peace and stability along with mutual cooperation among all nations.

Its correspondent Richard Bilton asked US Treasury Department Office of Foreign Assets Control (OFAC) director Adam Szubin “if Putin is corrupt.”
He lied, saying “(i)n our view, yes. . . He supposedly draws a state salary of something like $110,000 a year.”

“That is not an accurate statement of the man’s wealth, and he has long time training and practices in terms of how to mask his actual wealth.”

With no corroborating evidence, Szubin claimed Washington has known for “many, many years he’s been “enriching his friends, his close allies, and marginalizing those who he doesn’t view as friends using state assets.”
“Whether that’s Russia’s energy wealth, whether it’s other state contracts, he directs those to whom he believes will serve him and excludes those who don’t. To me, that is a picture of corruption.”

The reliable Saker justifiably calls Putin “one of the greatest Russian leaders ever.” He “secured his place in history.”

“(I)n a little over a decade, he brought her back as a world power capable of successfully challenging the AngloZionist Empire.”

His overwhelming 90% popularity reflects it, even during current economic hard times because of low oil prices perhaps heading lower.
At the same time, he hasn’t so far been able to change a US-created system established during the Yeltsin years. In the 1990s, so-called Western “advisers” turned post-Soviet Russia “into a US colony.”

Reforming its economy remains Putin’s most pressing internal challenge. He’s part of the solution, not the problem.

Szubin’s accusation is part of Washington’s longstanding campaign to vilify him. It’s had no effect on the vast majority of Russians supporting him – nor on his status as arguably the world’s most preeminent geopolitical leader, a master chess player, making Obama look buffoon-like in comparison.
Putin spokesman Dmitry Peskov dismissed Szubin’s accusation, calling it “pure fiction,” Britain is complicit in vilifying him.

A BBC Panorama documentary focused  on his “wallet,” his alleged “secret riches,” providing no evidence of his involvement in corruption – accusations without credibility.

Stephen Lendman lives in Chicago. He can be reached at lendmanstephen@sbcglobal.net. His new book as editor and contributor is titled “Flashpoint in Ukraine: US Drive for Hegemony Risks WW III.” http://www.claritypress.com/LendmanIII.html Visit his blog site atsjlendman.blogspot.com.
========
Dr. Paul Craig Roberts was Assistant Secretary of the Treasury for Economic Policy and associate editor of the Wall Street Journal. He was columnist for Business Week, Scripps Howard News Service, and Creators Syndicate. He has had many university appointments. His internet columns have attracted a worldwide following. Roberts' latest books are The Failure of Laissez Faire Capitalism and Economic Dissolution of the West, How America Was Lost, and The Neoconservative Threat to World Order.