• Negotiate the TPPA deal in secret.
• Refuse to listen to legitimate concerns about the undemocratic process.
• Produce a document that allows multi-national corporations to override our health,environment,employment and copyright laws.
• Invite the co- conspirators to our country to sign the deal close to Waitangi Day ( when we celebrate the founding Treaty of our nation - now seriously undermined by the TPPA).
• Hold the signing in a Casino and not Parliament.
• Bring out the riot squad if anyone objects.
Brilliant.

P.S. Oh- and while your at it , make sure you fly that new corporate logo flag on the day the foreign trade ministers get here. We don't want people looking at our current flag and wondering what happened to the rule of law.


---Bryan Bruce, via Facebook
....
John Key is not going to be in the position forever but he and his cronies may have delusions about being a permanent government

A strong government performance this year is likely to win over swinging voters, PM believes. 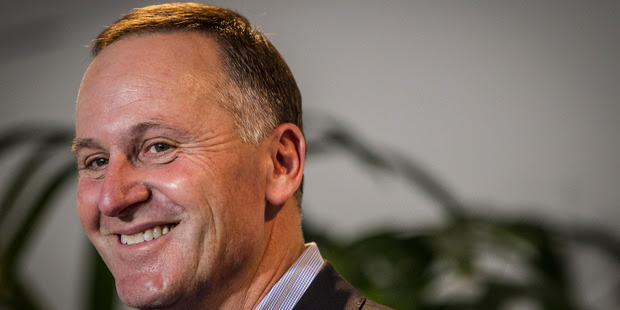 "That's my position. It's not something where I've gone away and actively considered but that is my position at the moment."
He is back at work after spending Christmas with family in his holiday home on Maui, Hawaii, followed by a road-trip with his wife, Bronagh, from Los Angeles to San Francisco.
Tomorrow afternoon he will be welcomed on to the marae at Ratana with other politicians.
And on Tuesday, after Wellington Anniversary Day on Monday, he will chair the first Cabinet of the year - although it will be without Finance Minister Bill English and Transport Minister Simon Bridges who will be visiting the Antarctic.
Mr Key said this year would be an important one for the Government because in reality, it was a lot harder to get things done next year.
He believed people cemented their voting intentions a lot earlier than many commentators thought.
"I'm not saying campaigns don't matter at the margins - they certainly can and do change voting patterns within the margins and within different blocs. But if swinging voters see a strong performance this year, they are much more likely to vote for us next year."
He said he wanted this year to be similar to other years in which he tried to deliver results "to keep earning the right to be there".
He implied there was disconnection between National's high poll rating (51.3 per cent in the December DigiPoll survey) and what he called "the noise" in the media about the Government's performance.
"The things that people really look to the Government for, economic performance, health, education, law and order, the Government has been delivering improving results to people."
Asked how he was going to lift living standards for New Zealanders he said: "In the same way we have in the past. In the main areas that count for people: interest rates, inflation, and real growth, you've got to have them occurring in a positive way."
Auckland was a market dominated by people with larger mortgages because of high house prices.
"For those people and for that group of voters, the two things that are really critical are interest rates staying low and the job market staying strong. So if they lose their job there is opportunity and that their mortgages don't climb despite the nominal size of their mortgage."
Auckland housing would continue to be a big focus of attention this year to avoid a housing bubble and to help first-home buyers get on to the ladder.
"But I don't think there is ever going to be one single thing you can do."
Everything the Government had done had generally been working.
"I suspect you'll see increases in house prices this year but at a much lower rate than we saw in 2015."

John Key says he won't change his approach to commercial radio despite being lured into a cage in a studio where he became part of a "gag" about male rape in prisons.
He left for a Christmas holiday in Hawaii and California without commenting on publicity around the antics but, in his first interview of the new year, he told the Weekend Herald there were always risks with commercial radio.
"If I really want to eliminate all those risks, I'd have to stop going on them," he said. "I'm not going to stop going on commercial radio stations because, in the end, that has been an important way for me to communicate with a broad audience, some of whom are only very tangentially interested in politics."
He said he had had no idea what The Rock had in store for him when he was asked to join Tom Furniss in a cage in the studio, other than the host was going to get "100 likes" on Facebook if he joined him.
Once he was inside, Furniss asked him to pick up a bar of soap, which he did, not knowing it was a reference to prison rape.
He said he had not known what the context was around the reference. And in fact when the host dropped the soap, he had said it had been in the toilet.
"That's what I thought the joke was. I can't stop these guys from doing some slightly crazy stuff.
"All I could do is not go on any of those shows but there are an awful lot of commercial radio stations and I'm on a hell of a lot of them during the course of the year."

You would have to be particularly stupid NOT to see that the PM is "promoting" a secret agreement that was decided behind locked doors. If it wasn't for Wikileaks we'd still know nothing about the intended robbing of sovereign rights.

PM will back TPP on marae 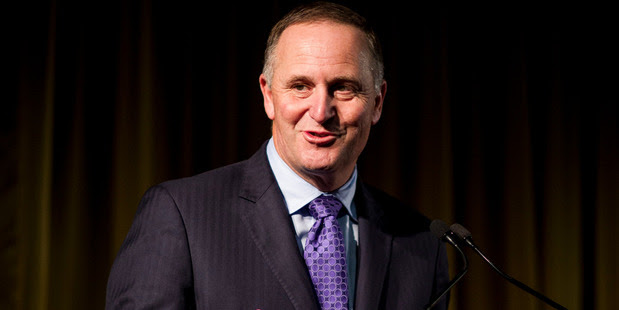 Prime Minister John Key says he will promote the merits of the TPP free trade agreement on the lower marae at Waitangi and that overall it was an important debate for his Government to win.
"The opportunities that come from a trade deal like TPP are at the core of what we are about as a Government, which is international connectedness and greater opportunities for our people," he told the Herald last night.

Mr Key told NZME he saw the Trans Pacific Partnership Agreement debate as an important one to win for his government, and said he would promote its merits at Waitangi.

"The opportunities that come from a trade deal like TPP are at the core of what we are about as a Government, which is international connectedness and greater opportunities for our people," he said.

It has now been confirmed that ministers from the 12 countries involved will attend the signing of the TPPA in Auckland on February 4.

However, Ngāpuhi kaumātua Kingi Taurua, who is a spokesperson for Te Tii Marae where national Waitangi commemorations are held, has said Mr Key should not be welcomed at the marae on February 5 if the TPPA is signed.

Mr Taurua said a lack of proper consultation with Māori had left them in the dark.

"It's underhanded, and has been since the agreement was made to now," he said.
The Prime Minister is usually welcome at the marae, but some years have seen protests over a variety of issues.

"If it were me, if I could influence others, I'd tell them to reject the government," Mr Taurua told Te Karere.

"Why should they be allowed to visit when they are actively rejecting the contract that we'd be discussing?

"It benefits the big companies, the government and exporters - it's great for them, but we don't reap the benefits from it."

Labour's Te Tai Tokerau MP Kelvin Davis says the best approach is for Mr Key to be welcomed on to the marae for a rational discussion - but is also critical of the government's handling of the TPPA negotiations.

"What they're asking Māori to do is just to take their word for it and trust in the government," Mr Davis said.

But Mr Key is sticking to his guns.

"I suspect the people who are vehemently opposed are, broadly speaking, opposed to free trade agreements because the arguments they have put up have been proven to be incorrect," he said.

Trade Minister Todd McClay yesterday responded to criticism of the benefit of the TPPA to Maori, saying there was nothing in the agreement which contradicts the Treaty of Waitangi

He said Maori assets worth over $40 billion were oriented toward the export economy.

Will he take his newly-formed riot squad with him to Waitangi? Politicians will again gather at Ratana Pa to mark the birthday of the prophet Tahupotiki Wiremu Ratana.
Politicians attending the Ratana Church's annual celebrations have been warned to expect protests over the controversial Trans-Pacific Partnership Agreement free trade deal.
MPs will descend on Ratana pa on Sunday as part of celebrations marking the birthday of prophet Tahupotiki Wiremu Ratana.
The event comes shortly before the ceremonial signing of the TPPA in Auckland on February 4.
The free trade deal has caused some tensions among Maori concerned about how it will affect their rights under the Treaty of Waitangi, despite the Government providing reassurances.
Ratana spokesman Andre Meihana said the church was expecting protesters at the marae, but would ask them to respect the occasion.
"We will not tell the protesters just to shut up and sit down, but we need to explain the history and reasons why this is before us.
"Every Maori should know the process of the marae...we must look after all our visitors, no matter what we think personally, and that's what we will be doing."
Meihana said Ratana had predicted the TPPA, speaking of a "flood" of "people of the world, seeking what you have".
"He talked about the 12 kings, and...you can identify them to be the 12 countries in the [TPPA] if you like, because that's what kings are, leaders of countries."
Ratana's historical connections with Labour would also be mentioned, on what was the 80th anniversary of the prophet's alliance with Prime Minister Michael Joseph Savage in 1936.
However, Meihana said he disagreed with Labour leader Andrew Little's description of Ratana as "a bit of a beauty parade" for politicians, and was sure the remarks would be discussed.
'FORTHRIGHT COMMENTS'

Little said he was looking forward to the event, and would speak about the importance of the relationship between Labour and Ratana.
"We've got good links, we have a number of morehu, Ratana followers, in our caucus and our party [who've] been very good, and we've got very good person-to-person links with Ratana."
Little said he would make some "pretty forthright comments" about whether Ratana's pledge and commitment to Savage was being fulfilled, as well as how the Government had failed Maori with its social policies.
A spokeswoman for Prime Minister John Key said his speech would be "wide-ranging" and cover the Government's record working with Maori in a range of areas, including education and treaty settlements.