Even this article can't quite tell the full truth about the state of the world economy.


Cheap debt, the China slowdown, and a glut of ships have seen the Baltic Dry Index plummet to its lowest level in more than 30 years

The shipping industry is facing its worst crisis in living memory as years of rapid expansion fueled by cheap debt have coincided with an economic slowdown in China.

"We are now at the stage where people are struggling to remember an era when it was this difficult, we've gone through what it was like in the '90s, the '80s and the '70s, so expressions like 'living memory' start to apply," said Jeremy Penn, the chief executive of the Baltic Exchange in London.

The Baltic Exchange has set shipping rates for more than 2 1/2 centuries, and the situation its members now face is grim.

"Ship owners are facing the tough decision of whether to just drop anchor and hope it gets better," Penn added. 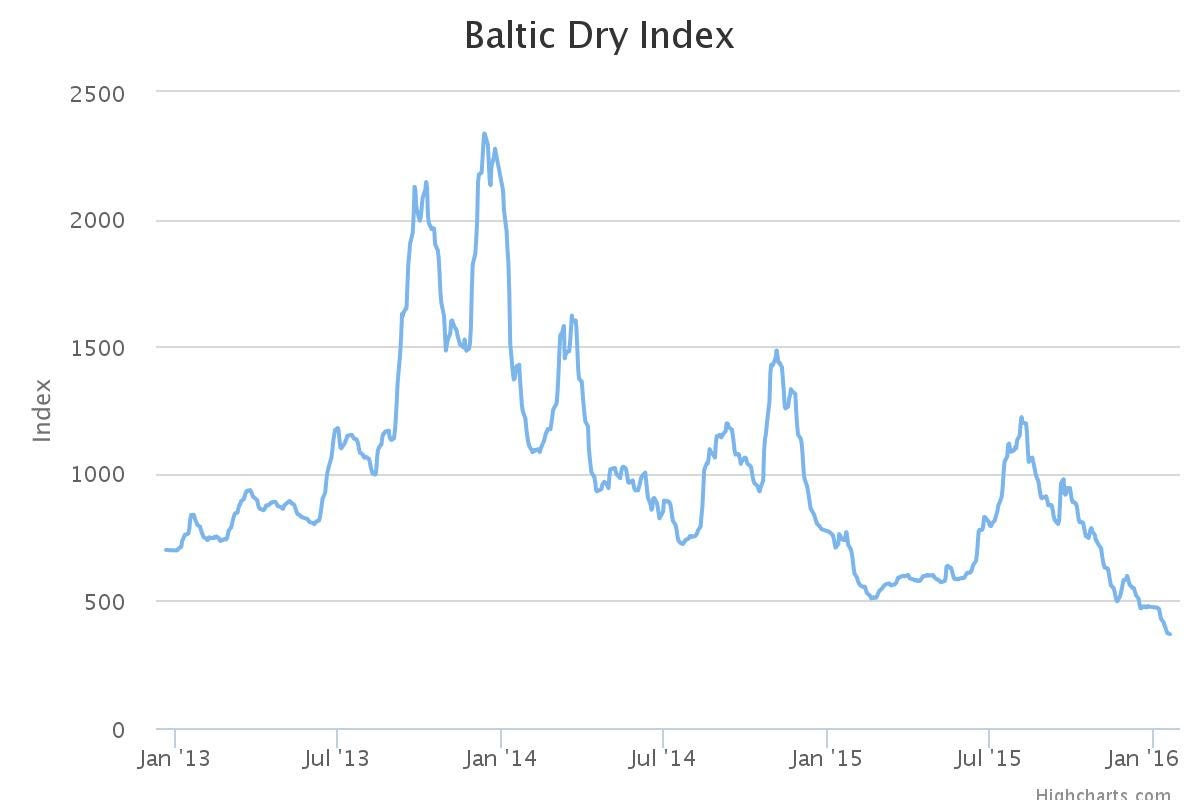 Fears about the global economy have seen the Baltic Dry Index fall by more than 20% this year, to 369 — its lowest level since records began in 1985. The Baltic Dry, which is compiled by the exchange, gives an indicator of the cost of shipping dry bulk goods such as coal, iron ore, grains, and finished goods such as steel, but it is feted for its apparent ability to predict the world's financial fortunes.

The immediate problem has been the slowing of the Chinese economy; the world's largest consumer of commodities has been the driving force behind the shipping trade for the past two decades. 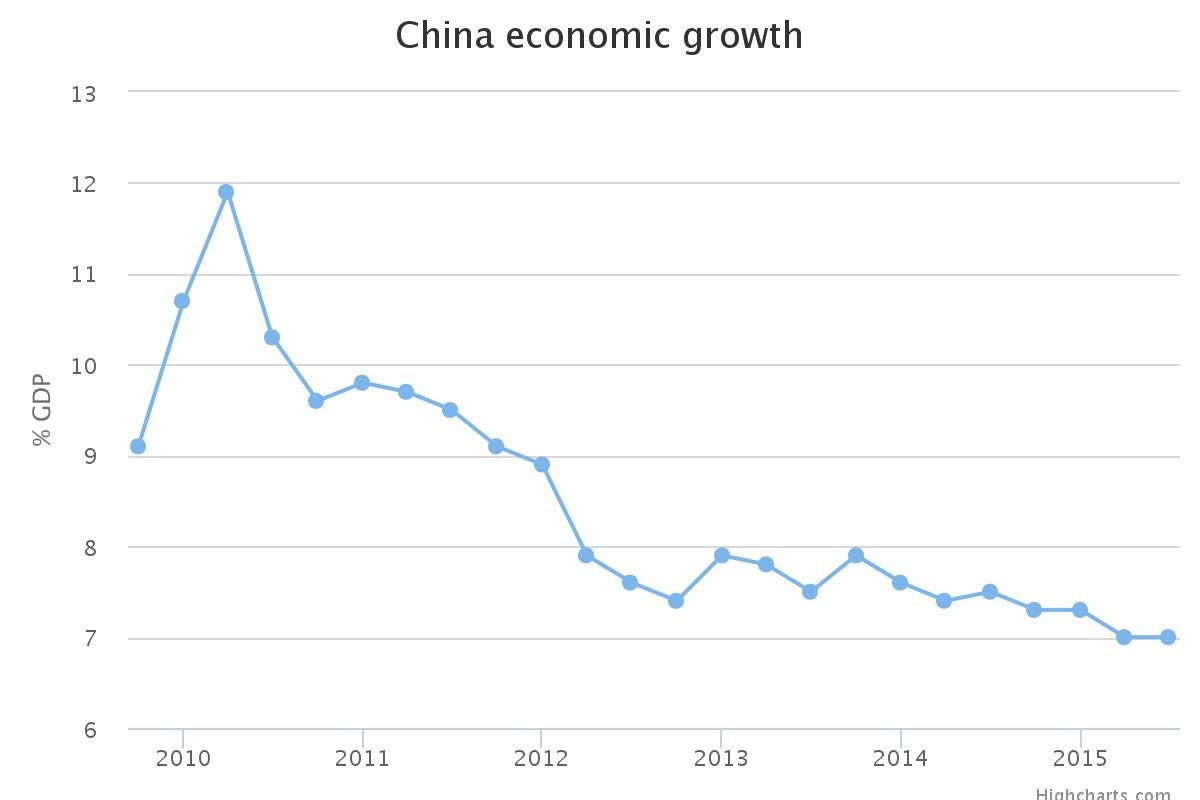 Via The Telegraph
But much of the pain is also self-inflicted. Shipping has undergone a period of massive growth, fueled by cheap debt and steady demand.

The world fleet doubled in size from 2010 to 2013. At the same time, China doubled its shipyard capacity and took huge orders for new ships as it sought to control the commodities trade. 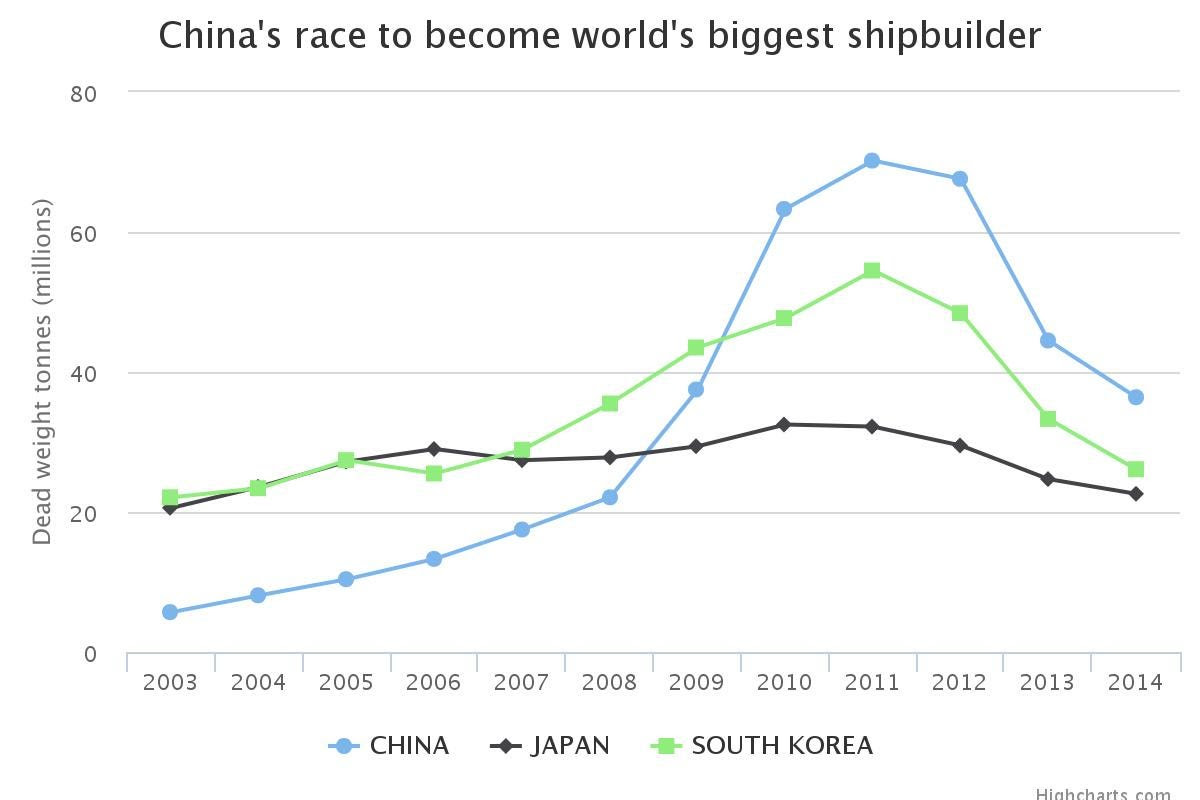 Via The Telegraph
"The dry cargo market was used to growth approaching 10% for quite a few years on the trot," said James Kidwell, chief executive of the London-listed broker Braemar Shipping. "All of a sudden you've hit a market that's gone flat. That is a radical change.
"If you've got more ships than there are cargos, then freight rates are going to be weak — it's that simple."
The impact on ship owners' profits has been drastic. The average charter rate for the largest Capesize vessel — named that because they are too large for the Panama canal and have to round Cape Horn — has fallen to about $2,700 a day. By contrast, they had traded within the range of $15,000 to $25,000 during the past two years and briefly touched $250,000 during the mania of 2008, according to Penn.
Many trips are now loss-making as the cost of running a Capesize vessel, which at up to 340 meters is equivalent of almost four football fields in length, can run to $7,500 dollars a day.

In a normal market the rational decision would be to remove loss-making ships from the fleet, but this is anything but a normal market. The world shipping fleet is drowning in debt.
Kidwell describes how ship owners who have financed their fleets with 60% debt and 40% equity have seen that equity become worthless.
Meanwhile, the banks that provided the debt won't pull the plug, as they would be forced to recognize the losses. Instead, they accept that they won't have debt service, and they are forced to wait and see whether the ship owner can survive until the market recovers. At some point they might be able to sell the vessel at a better price. 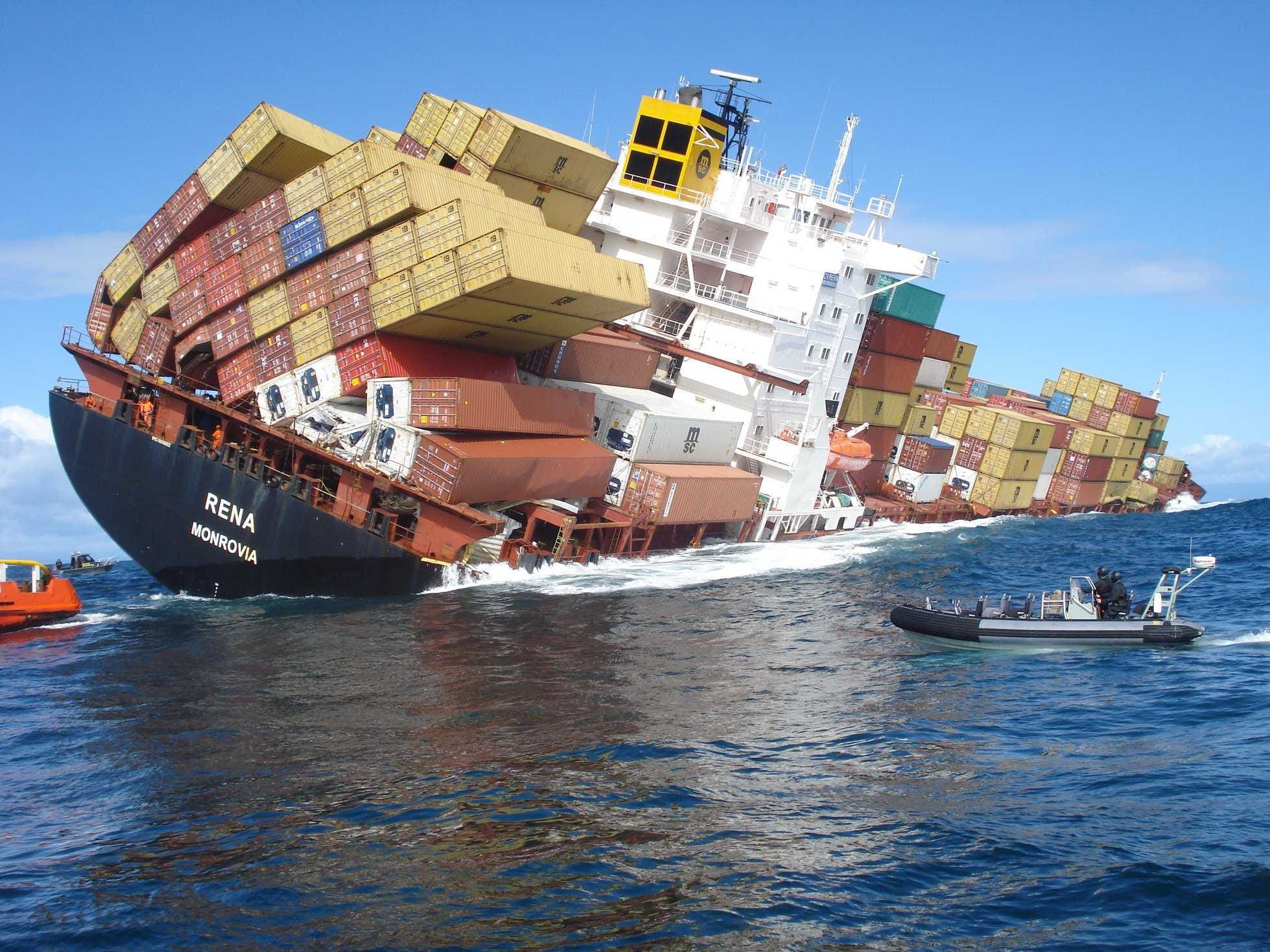 REUTERS/Svitzer/HandoutThe 47,230-tonne Liberian-flagged Rena listing, about 22 kilometers from Tauranga, on the east coast of New Zealand's North Island, on October 15, 2011, more than a week after it struck the Astrolabe Reef.

"What is damaging shipping is a zombie fleet, which accepts freight at maverick prices just to keep going," Kidwell said.
A zombie ship is one that can just about repay interest on its debts but has no hope of repaying the capital.
The situation might be about to get a lot worse for loans to the shipping industry. The calculation of loan repayments and the rate of interest depend on the historic residual value of the ship at the end of the life of the loan.
Kidwell said a five-year-old Capesize vessel was sold for $19 million in recent weeks, 40% below the normal listing price for a vessel that age of about $33 million, and less than half the $48 million cost of a new ship. The scrap value of ships has also plummeted as China pumps new steel onto world markets.
The collapse in prices for secondhand vessels will blow a hole in the balance sheet of any bank or individual that is sitting on those loans.
The UK may no longer be a huge player in the ownership of fleets, but British banks such as RBS have total loan exposures of £8.3 billion, and Lloyds bank also provides finance to the industry. London is still the center of the world for ship broking through companies such as the FTSE 250-listed Clarkson and the smaller Braemar Shipping.
London also retains is position as one of the world centers for marine insurance, with Lloyd's of London writing £2.1 billion in gross written premiums in 2014.
It is not all bad news for the brokers, however. The glut of oil on world markets has led to one of the busiest tanker markets for years. The prospect of Iran entering the fray with 41 additional tankers could bring further lucrative commissions after the US lifted its 40-year oil embargo this month.
But the outlook remains bleak for the owners. 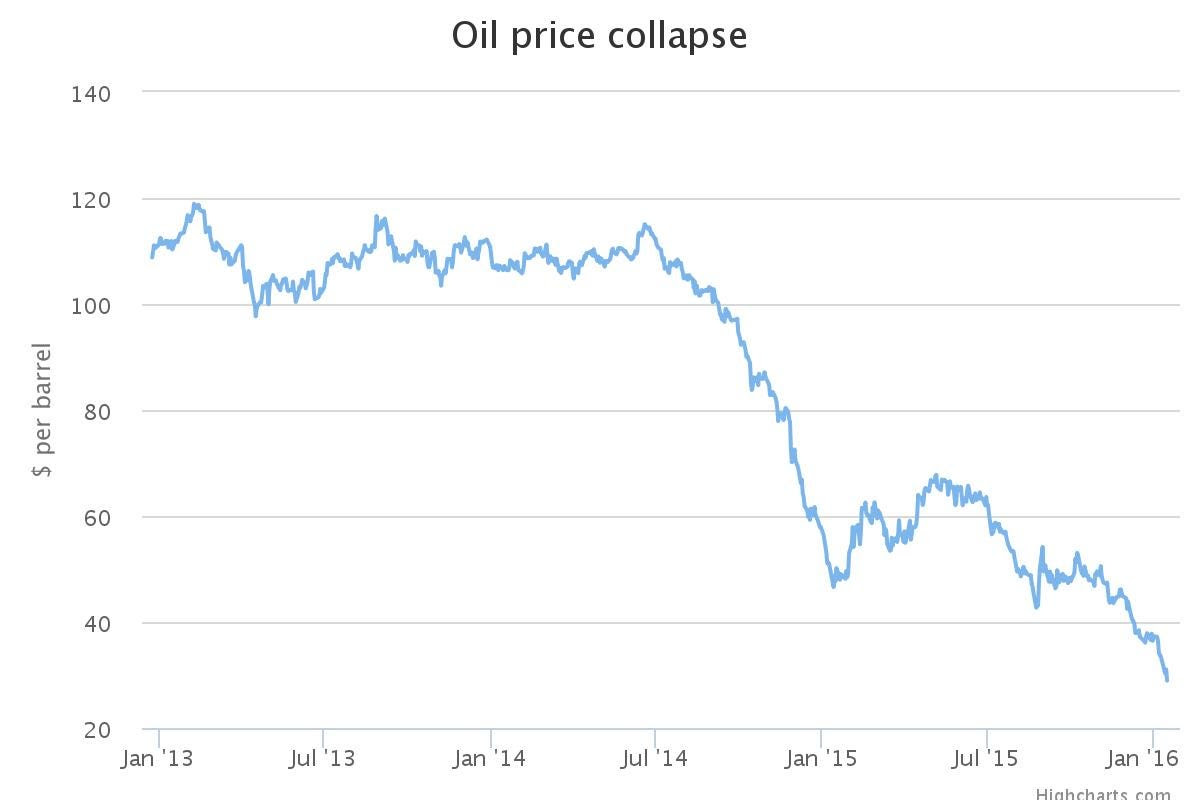 Via The Telegraph
At some stage, ship owners will be forced to take their ships out of the market. This will be a slow process, Penn warns.
In the old days you could lay up ships fairly easily, and dramatically reduce costs, but these days with all the modern technology and electronics on board it is much more difficult, Penn said. We haven't seen that cold lay up that we have seen in past recessions, he added.
"Ship owners and people who are still in the market presumably still think there is hope, and that the market turnaround will come before they are completely desperate," Penn said.
"But there is widespread depression in the market at the moment."