A gang of up to a hundred black-clad masked men marched in central Stockholm on Friday evening, singling out and beating up immigrants, and handing out leaflets threatening further violent attacks against unaccompanied refugee youth. 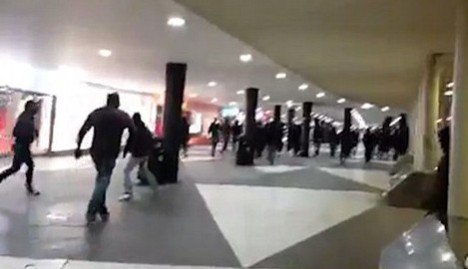 The march, the most extreme reaction seen so far to the murder on Monday of social worker Alexandra Mezher, has been linked to football gangs and far-right groups.
It was followed on Saturday morning by a demonstration at the nearby Norrmalms Torg  organised by the anti-immigration Sweden Democrat party, which called for the government to resign over its handling of the refugee crisis.
According to Aftonbladet newspaper, men were distributing leaflets on Friday evening with the slogan “It’s enough now!” which threatened to give “the North African street children who are roaming around” the “punishment they deserve.”
“They were scattering leaflets which had the intention to incite people to carry out crimes,” Stockholm police confirmed on its website.
By 9pm, three people had been arrested, one for punching a plain-clothes policeman, and another for carrying brass knuckledusters, although all three had been released by Saturday morning.
“We have been able to link them to hooligan gangs for Stockholm football teams,” Fredrik Nylén from the Stockholm Police told Aftonbladet newspaper.
A witness told the newspaper that he had seen a group of the men beating people who appeared to have a foreign background in the middle of Stockholm’s busy central Sergels torg square.
“They came from Drottninggatan [Stockholm's main shopping street] and walked down toward the square and began to turn on immigrants,” a witness told Aftonbladet. “I saw maybe three people who got beaten. I was quite scared so I left.”
Police on Saturday morning would not confirm whether any of the marchers had assaulted immigrants.
After the attack the Swedish Resistance Movement, a neo-Nazi group, issued a statement claiming that the groups had “cleaned up criminal immigrants from North Africa that are housed in the area around the central station”.
“These criminal immigrants,” the post continued,”have robbed and molested Swedes for a long time.”
“Police have clearly shown that they lack the means to stave off their rampage, and we now see no other alternative than to ourselves hand out the punishments they deserve,” the text of the leaflet, published on the group’s website, read.
“Swedish men and women deserve security in their daily lives and we therefore urge all others who see problems to follow in our footsteps, both in Stockholm and in other locations around the country.”