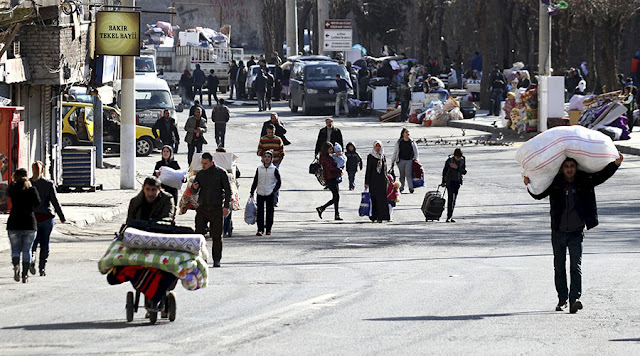 Hundreds of people have fled the mainly Kurdish city of Diyarbakir, located in southeastern Turkey, as authorities have extended the curfew there after 23 people were killed in street battles, including three Turkish soldiers and 20 Kurdish fighters.

Heavy gunfire continued on Wednesday in the ancient Sur district of Diyarbakir amid clashes between authorities and militants said to be members of the Kurdistan Workers’ Party (PKK), which has been outlawed by Ankara, Turkish Dogan news agency reported.

Three Turkish soldiers were killed in Sur when militants fired on them with rifles and a rocket launcher, Reuters cited security sources as saying.

Turkey’s army also confirmed that it had killed 11 alleged PKK in the town of Cizre near the Syrian border, and nine others in Sur on Tuesday. The Turkish army claims it has killed 134 Kurdish fighters in the ancient Sur district since December. The district has also witnessed severe damage since then.

The 24-hour curfew zone has been extended to five more districts in Diyarbakir, according to the district governor’s office. The curfew bans residents from leaving their homes and forbids observers and reporters from entering the areas when clashes are taking place.

“Turkey’s state early in the morning started to warn people that they have to leave their houses. And right now thousands of people are trying to leave Sur district, the ancient part of the city,” Harun Ercan, a Diyarbakir resident, told RT.

“This armed conflict continues to create new tragedies and these people don’t know what to do. While these operations continue, gross human rights violations are committed by Turkey’s security forces,” Ercan added.

Turkish authorities have introduced curfews in several Kurdish-majority towns since the peace process with the PKK collapsed in the summer of 2015.

READ MORE: No terrorists at the table? Turkey ‘threatens to withdraw’ from Syria talks over Syrian Kurds

However, the Turkish Human Rights Foundation reported that at least 198 civilians, including 39 children, have been killed in military operations in the area since August.

Kurds have long been campaigning for the right to self-determination and greater autonomy in Turkey, where they are the largest ethnic minority. In late December, a congress of Kurdish nongovernmental organizations called for Turkey’s southeastern regions to be granted autonomy via constitutional reforms.

Turkish security forces launched a large-scale security operation in southeastern part of the country on December 14.

Human Rights Watch criticized the curfews, stating that they make it impossible to monitor causes of deaths.

“Many people have died in circumstances which are extremely difficult to scrutinize because of the curfews,” The Guardian quoted Emma Sinclair-Webb, a senior researcher for Human Rights Watch, as saying.