“That Europe’s finance ministers make decisions at the Eurogroup on the basis of precisely no detailed information. And that their deliberations, before these crucial decisions are taken, are conducted under perfect secrecy, without any minutes being taken. Citizens, in other words, will never get to know what their representative said, or how she/he voted, on their behalf. Ever!”

On Podemos, Greece and DiEM – Interview in El Mundo 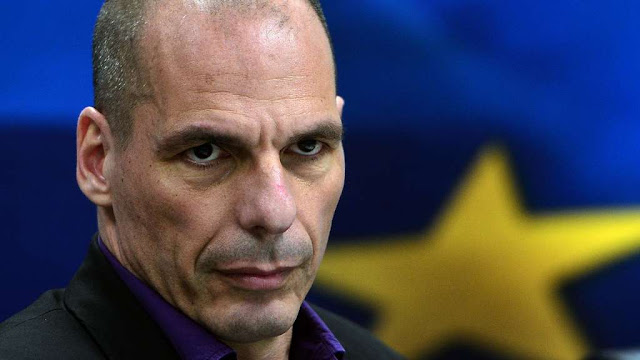 For the El Mundo site (in Spanish), click here. To read my original English language responses…

Why did you resign the very next day after the ‘no’ victory in the Greek referendum?

Because the Prime Minister told me, on the night of that magnificent result, that it was time to surrender to the troika. Not what I had entered politics for and certainly not what the mandate that the 62% NO vote we had just received stipulated.

Did the European leaders press Tsipras to get rid from you? Jeroen Dijsselbloem, the president of the Eurogroup of finances ministers, has admitted that he did so…

They knew that I would never sign up to a new non-viable, toxic loan agreement. That was clear from the beginning. I was elected to negotiate a viable agreement. And since it is the finance minister who signs these agreements on behalf of the state, it was essential to the troika that I should be removed.

Why do you think you are so uncomfortable (and considered even dangerous) for the EU leaders?

Because I was an obstacle to the maintenance of their permanent denial regarding their failed fiscal reform programs.

What has been your major mistake during the time you were Greece Finance Minister?

To believe that the troika would honour the spirit and the letter of the 20th February Eurogroup agreement. It was on the basis of that false belief  that I signed, a few days later, the application for an extension to the previous loan agreement.

Some people blame you for the painful turn of the Greek situation during the first Syriza Government. Are you guilty?

If there was a painful turn due to our policies, I would of course be responsible (as the finance minister in charge). However, even Eurostat confirms that, during my 5 months in office, real national income in fact rose. The damage came right at the end of my ministry. And it did not come from some policy that I implemented. It came because the troika ruthlessly closed down Greece’s banks in order to force upon the Prime Minister further reductions in pensions, greater taxes for consumers and companies etc. And afterwards they blamed the damage they caused on… me. (Typical of bullies who blame the victim for her/his victimization.)

What was the most disappointed/surprising/unbelieving thing that you learned about politics while you were minister?

That Europe’s finance ministers make decisions at the Eurogroup on the basis of precisely no detailed information. And that their deliberations, before these crucial decisions are taken, are conducted under perfect secrecy, without any minutes being taken. Citizens, in other words, will never get to know what their representative said, or how she/he voted, on their behalf. Ever!

Isn’t it true that one of the main reasons Europe treated Greece in a such hard way was to try to prevent the growth of Podemos in Spain?

If so, it’s clear they didn’t succeed, seeing the very good result of Podemos in the last Spanish polls.

They did not succeed as much as they had hoped they would. But they did succeed in preventing Podemos from gaining the dynamic that Syriza had during 2014 and, in so doing, they prevented Podemos from coming close to the formation of a government. Any government led by PSOE in which Podemos participates will be bound by the rules of the troika and will, in a short space of time, undermine Podemos’ integrity.

Will Mr. Tsipras politics work? What do you think four months after his victory in the September general elections?

In the summer Alexis and I disagreed on one crucial issue. He thought that he faced a choice between the new Memorandum of Understanding (MoU) with the troika and expulsion from the Eurozone. I disagreed. My view was that Dr Schauble’s plan was to make us accept the MoU as a first step toward Grexit. We also disagreed on a second, but important, matter. Alexis believed that he can implement the MoU and at the same time implement a ‘parallel legislative program’ that would lessen the MoU’s terrible impact on the weaker Greeks. I could not see how that was possible, since the MoU left absolutely no room for such a ‘parallel program’. Indeed, in December the government was forced by Mr Thomas Weiser (the troika’s coordinator as President of the EuroWorkingGroup) to withdraw its ‘parallel program’.

What will be your recipe to solve this crisis that already goes on for six years? Could the Grexit be a solution?

The solution will only come if the basic proposals and philosphy we had proposed in May (based on a document entitled Policy Framework for Greece’s Fiscal Consolidation, Recovery and Growth) is accepted. There is no other way. None of this entails Grexit. Grexit was the threat used by the troika to force the Greek Prime Minister to capitulate to an MoU that was designed to fail.

You have call the European leaders and the troika ‘terrorist’ for forcing the Greek government to close the banks before the July referendum. You have define what happened those days as a big coup d’état. Do you still stand by those affirmations? Why?

Because they are apt descriptions of what they did. Terrorism is the pursuit of a political agenda by the illicit and lawless spread of fear. Threatening a sovereign people with the closure of their banks (the same banks that the ECB itself pronounced solvent) in order to force them to accept policies that are condemned to fail (and thus push this people deeper into a Great Depression) falls under the above definition of terrorism. As for the coup d’ etat term, it was not mine. It was how Prime Minister Tsipras defined what they did to him in Brussels (on 12th and 13th July) to force him to accept the third MoU. (And, of course, he was right.)

Are the examples already mentioned not enough? I think they are! Is it not evident to anyone that crushing Greece’s democracy to prevent Podemos from doing well in the Spanish elections not a sign that democracy in Europe has died some time ago? Is any European democrat happy with the situation in which all important decisions are taken in complete darkness and secrecy? DiEM (our Democracy in Europe Movement) will offer all European democrats who feel enraged by these practices a platform to organise for the reclamation of European democracy.

What will your new movement propose to solve those problems?

The whole point about DiEM, our movement, is to create a powerful force across Europe that makes it possible to imagine the democratisation of the EU. How we will achieve this will be the topic of conversation in Berlin. But for this, you need to wait until the 9th of February and the publication of our Manifesto a few days earlier.