South Front,
22 January, 2015
On the internet there appeared photographs of weapons captured by the Islamic State fighters near the city of Deir-ez-Sor in Syria. That region has seen intense and bloody fighting in the last several weeks, with the Islamic State launching a counteroffensive in mid-January 2016. Judging from the photographs, the militants were able to overrun a Syrian Arab Army air defense unit garrison and capture at least one 2P25 launch vehicle of the 2K12 Kvadrat air defense systems, an 1S91 self-propelled surveillance and tracking unit, and several 3M9 missiles. Judging by the external appearance, the 1S91 was operational at the time of capture.
J.Hawk’s Comment: There are several possible interpretations to this story. One is that ISIS does not, in fact, have an operational air defense system at its disposal but is rather bluffing, hoping to dissuade Russian aircraft from operating over the territory it holds, because from an operational point of view it would make more sense not to announce this acquisition and use the element of surprise to ambush a Russian aircraft.

The second interpretation is that the story is actually true. Considering that there are likely both Iraqi and Syrian Sunnis who have in the past operated the Kvadrat system, the Islamic State would likely be able to put together a complete launch crew, which in turn would require to dedicate the Russian air group in Syria to dedicate a number of aircraft (especially the Su-34) to the air defense suppression mission.

The third and most worrisome interpretation is that ISIS is actually obtaining air defense weapons through external channels (while claiming they were captured from the SAA), most likely Turkey, which in turn could procure such weapons from Ukraine. The recent contacts between these two countries’ defense officials suggest this scenario cannot be ruled out. It would also mean a significant escalation of the conflict in Syria.

TERRORISTS HAVE WEAPONS CAPABLE OF DOWNING AIRCRAFT IN SYRIA

Russian MoD: Militants possess weapons such as ZU-23 [anti-aircraft gun] and others that are capable to hit Syrian aircraft “Indeed, militants possess weapons such as ZU-23 [anti-aircraft gun] and others that are capable of hitting targets at the height of 4,000 meters, especially, such a big aircraft as Syrian Air Force’s IL-76 military transport plane,” Russian Defense Ministry spokesman Igor Konashenkov told journalists.

According to Maj. Gen. Igor Konashenkov such attacks by terrorists were recorded when the first batch of Russian-Syrian humanitarian aid was sent to Deir ez-Zor.

“It [the cargo delivery operation] is very risky. In most cases delivery is performed at night without any illumination.”

The Syrian authorities confirmed that Russian humanitarian aid had been successfully delivered to areas besieged by terrorists.

“They [Syrian authorities] confirmed that the humanitarian aid is ditributed to people in need,” Maj. Gen. Igor Konashenkov said.

We remember, on Jan. 15, a cargo plane of the Syrian Air Force using Rusian P-7 platforms airdropped a total of 50 tons worth of food supplies and basic necessities to Deir ez-Zor.

Pentagon’s chief is looking for “an effective coalition” against Islamist militants. On Wednesday, January 20, the US Defense Secretary Ash Carter met with his French counterpart and to attend a defense ministerial to the fight against the Islamic State in Iraq and the Levant. Ash Carter met with his French partner seeking ways to bring Arab states “in the game” too.
In a joint press conference, the pentagon’s chief Ash Carter said that US had plans to increase the number of troops in Iraq as it seeks to “accelerate” its campaign to “crush” Islamic State in the region.
Apart from the bilateral meeting with French Defense Minister Jean-Yves Le Drian, Ash Carter also met the first with seven major members included Britain, Germany, Italy, Australia and the Netherlands of the anti-Islamic State (IS, formerly ISIS/ISIL) coalition. The “face-to-face meeting” is intended to figure out the ways to boost their fight against Islamic militants.
Pentagon stressed that the coalition’s major goal right now is to target and destroy IS headquarters in Iraq and Syria while also combating their supporters worldwide, “everywhere its metastasis have spread around the world.”

“We’re doing this by providing a plan, clear leadership and the power of a global coalition wielding a suite of capabilities [that include] airstrikes, special forces, cyber tools, intelligence, equipment, mobility and logistics, and training, advice and assistance,” Ash Carter told into the joint news conference.

He also laid out some of the Pentagon’s plans regarding the coalition and its strategy. Addressing to the success in taking the Ramadi of Iraq back from the IS, Carter told that he ‘expects’ the number of additional US advisers in Iraq to increase, as well as “the variety of the training they’re giving.”
The Pentagon chief said,“So for example, as territory is retaken from IS, as moving up and ultimately including Mosul, there are going to need to be not just ground forces that can seize territory, but police forces that can keep security,” Without giving number to the reporters Ash Carter said that the number of US personnel is going “to increase greatly as the momentum of the effort increases.”
He also said that the reinforcement would also involve its coalition partners. In this regard, Carter said that one of his goals is to bring Arab countries – “Arabs and Sunni Arabs” – into the military campaign, as they can be “an enormous contribution to this.”

“I want to hear from my counterparts over the next couple of days – how can we get them in the game. I have long said that Arabs and Sunni Arabs need to get in the game.” the Pentagon chief said

“Every nation must come prepared to discuss further contributions to the fight, and I will not hesitate to engage and challenge current and prospective members of the coalition as we go forward.” he also added.

All together for the first time, defense ministers from 26 counter-ISIS coalition nations, plus Iraq, will be meeting in Brussels in February on a discussions to “hasten” the defeat of terrorists. © US Air Force / Staff Sgt. Shawn Nickel / AFP
http://southfront.org/u-s-admits-bombing-civilians-in-iraq-and-syria/
On January 21, a Western media outlet Daily Beast reported that the U.S. military is to announce it killed or wounded civilians on at least 14 occasions in Iraq and Syria.
A US defense official told to Daily Beast that the 14 new incidents which claimed at least 15 of civilian casualties occurred in 2015.
Until last week, the US had accepted responsibility in just two such cases.
The report said that American military launched more than 7,500 airstrikes over the course of 17 months of ISIS war, the toll could very well increase.
The Daily beast also said that Pentagon was reluctant to admit causing civilian casualties during its bombing campaign against the terrorist group Islamic State (IS, formerly ISIS/ISIL and now in three weeks, it is to announce 14 new cases from 2015 that killed or injured a total of 29 innocent people.
The news website also said that last week the military detailed five incidents between April 12 and July 4, 2015, that had claimed eight lives and left three others injured. This week the Pentagon is to acknowledge five more incidents, and next week four additional cases will be announced.
The report indicates the US desire to avoid civilian casualties, and for that reason it is so long avoided targeting the terrorist group’s revenue-generating facilities, such as the convoys of stolen oil that IS smuggles out of Syria and Iraq.

U.S. Central Command spokesman Air Force Col. Patrick Ryder stated to the website that “We take all allegations of civilian casualties seriously and assess all incidents as thoroughly as possible. In accordance with our commitment to transparency, we are working to release assessment findings of closed allegations as soon as possible.”

A recent UN report said that nearly 19,000 civilians had been killed in the fighting in Iraq alone. A war in which bombs are being dropped from 30,000 feet from the above from the ground, it could lead to many innocent deaths.

No permission sought, none given: new US airbase in Syria anyway

The US is building an airbase in Syria without any okay from Damascus.

The upgrading of an abandoned airbase is going on right now in northeastern Syria, on territory controlled by Kurdish Peoples Defence units. Yesterday American experts started to prepping the runways and other key infrastructure for a new air base.

However, all these activities are not consistent with the official authorities: Damascus has not given Washington permission.

Reporters have noted the fact that US cooperation with the Kurds in the fight against the IS terrorist group is already causing a lot of questions. Furthermore, it has become certain that the Kurdish units that are in the Syrian Democratic Forces, are often in contact with the Americans, giving them targets for US airstrikes

Turkey in Panic Mode After Spotting Russian Engineers on Syrian Border
Amid rising tensions between Ankara and Moscow, Turkish President Erdogan has expressed concern over the alleged presence of Russian engineers near the country’s Syrian border. 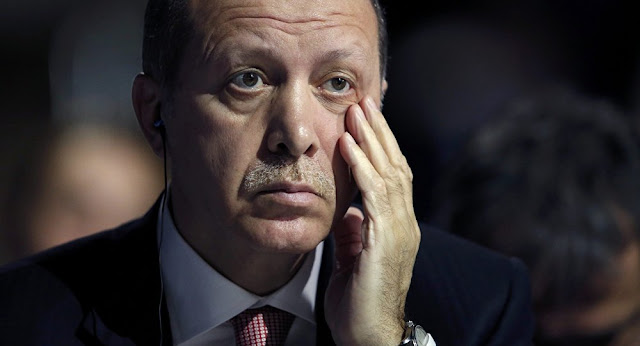 The Turkish government has expressed alarm over Russia’s air campaign in Syria since it began last September. Along its Syrian border zone, Turkey has dug defense trenches and increased security forces, despite the fact that Moscow has repeatedly stated its goal is to combat terrorist groups in Syria.

On Friday, Turkish President Recep Tayyip Erdogan expressed new levels of panic, sounding the alarm over the alleged presence of Russian inspectors at an airport near the Turkish border.

"We have said this from the beginning: we won’t tolerate such formations (in northern Syria) along the area stretching from the Iraqi border up to the Mediterranean," he told reporters. "We maintain our sensitivities on these issues."

Erdogan said he plans to discuss the matter with US Vice President Joe Biden when the two meet on Saturday.

"I can say that Turkey is closely watching every military movement on its borders and especially the border with Syria," a Turkish government source added, speaking on condition of anonymity.

But the president fails to address the underlying cause for any tensions in the border zone: Ankara’s downing of a Russian bomber in Syrian airspace. Following that incident, Russia was forced to move S-400 air defense systems to Hmeymim airbase.

"They thought that we would turn tail and run. No, Russia not that country," Russian President Vladimir Putin said last month. "We have increased our presence in Syria, have increased the number of combat aircraft deployed there. There was no Russian air defense system there – now there’s the S-400.

"If before, Turkey had constantly violated Syrian airspace, let them try it now."

Moscow also deployed warships to the Mediterranean to assist in the anti-terror campaing, as well as to protect Russian jets.

Erdogan’s comments also come amid Turkey’s increased concern over the presence of Kurdish militants along the border. While the YPG has proven to be one of the most effective ground forces fighting against Daesh in northern Syria, Ankara has labeled the group a terrorist organization.

While Moscow has pushed for the inclusion of the YPG in Syrian peace talks, Ankara has refused, threatening to extend the bloody conflict.

"For us, there is no difference between PYD, YPG, PKK, or Daesh," Erdogan said. "We will discuss this with Biden tomorrow.

"I hope that this joint stance will be aimed at preventing this wrong Russian formation in northern Syria."
Posted by seemorerocks at 16:14