Sexual violence by refugees permitted (and denied) in Europe 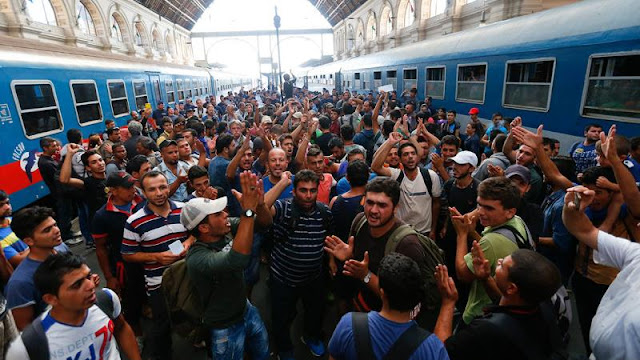 
On Wednesday, we brought you the tragic story of 22-year-old Alexandra Mezher, who was stabbed to death by a Somali migrant child in a Swedish asylum center for unaccompanied refugee children.

Mezher’s death served as a poignant reminder to the country’s politicians that the move to take in 163,000 asylum seekers fleeing the horrors of the Mid-East’s many proxy wars isn’t without risk.

The stabbing comes at a particularly delicate time for Swedish authorities. Earlier this month, Nyheter Idagreleased an investigative report alleging prominent Swedish daily Dagens Nyheter sought to conceal from the public a wave of sexual assaults at a youth festival and concert in central Stockholm’s Kungsträdgården last August.

Dagens Nyheter denied the allegations, saying it was in fact Swedish police that were responsible for the coverup.

Meanwhile, “gangs” of Moroccan migrant children have commandeered the main train station in Stockholm, where they plunder, grope, and otherwise wreak havoc upon helpless Swedes. Or something.

And it’s not just Sweden. There have been hundreds of reported sexual assaults across the bloc this month and so far, the “best” solution officials can come up with is a kind of blame the victim strategy articulated by Cologne mayor Henriette Reker who suggested that it is German women’s responsibility to keep themselves from getting raped by staying an “arm’s length” away from would-be attackers.

This week we got another example of officials effectively blaming the victim, this time in Denmark where a teenager who used pepper spray on an assailant will be fined for deploying an illegal substance.

The alleged attack occurred “near an asylum center” and according to the girl, was perpetrated by an “dark-skinned English speaking man who knocked her down and tried to undress her.”

“She was later warned by police that the pepper spray she used on him was illegal for private citizens to possess, and that she would face a £50 fine,” The Telegraph writes.

“It is illegal to possess and use pepper spray, so she will likely to be charged for that,” a police spokesperson said.

"Numerous readers wrote in the comments section on TV Syd’s story about the incident that they would be willing to pay the girl’s fine," The Local says. "The man who attacked the 17-year-old fled from the scene and has not been charged."

According to the Copenhagen Post, more Danes are traveling to Germany to buy pepper spray than ever before.

“Sales have really exploded after the New Year and the attacks in Cologne,” an owner of a weapons store in the border town of Flensborg, said. “In January, we’ve had 50-60 percent more Danish customers than usual.”

You'll recall that pepper spray sales are off the charts in Germany since the attacks in Cologne on New Year's Eve as are Google searches for the weapon. 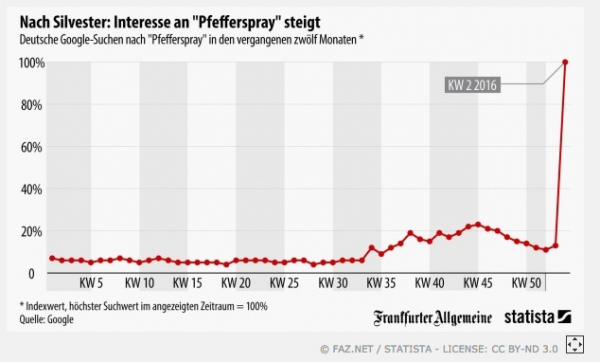 But don't be fooled says Anders Rasmussen, a prevention specialist at the Danish Crime Prevention Council, pepper spray may be used as a defensive weapon in some cases, but if legalized in Denmark, people will "quickly" start a non-lethal arms race with one another.

"Pepper sprays give a false sense of safety," Rasmussen told The Post. "They can also be used as an offensive weapon, which may quickly develop into a sort of armed competition between civilians."

Yes, "a sort of armed competition between civilians" who would presumably try to stockpile mace in a dangerous game of pepper spray one-upmanship. One commenter - a Frank Silbermann - is incredulous:

We wonder if Rasmussen would point to 17-year-old girls' usage of pepper spray on would-be assailants as an example of how dangerous society can get once you allow "civilians" to carry mace.

We close with the following screengrab from US News & World Report:

Police in German town advised not to

Police in the German town of Kiel were told not to prosecute or arrest migrants for petty crimes, media have revealed. The instruction, which was filed weeks before the sexual harassment scandal in Cologne on New Year’s Eve, cited a lack of IDs among the migrants.

The documents first emerged in Bild newspaper and local Kieler Nachrichten daily. According to the media, the official guidelines of Kiel police department called for restriction of the prosecution for petty offences such as shoplifting or vandalism.

Police department and prosecutor's office reportedly held a "collective discussion" on October 7 to discuss criminal charges toward refugees who might commit crimes in Germany upon arrival. They found out that most of the refugees and migrants didn’t have any proper documents or registration.

The authorities then concluded that the costs of pursuing migrants for small offenses were too high, while the chances of success in court were too low, the media said.

After their 13-year-old daughter was brutally gang raped by a group of Muslim migrants for 30 hours straight, the parents thought the police would deliver justice to the depraved pedophiles. However, what officers told them immediately turned their child’s nightmare into a living hell.

Three Muslim migrants, described as “Arab men” and “foreign nationals,” grabbed the schoolgirl, whose family immigrated from Russia, on her way to class, covered her eyes with a blindfold, and took turns raping and assaulting her for 30 hours.

After she was dropped back off at her middle school, the traumatized child and her devastated parents believed that authorities would find and punish the girl’s attackers, but what they said instead is not only shocking and sickening, but a warning that the leftist agenda is perpetuating this depravity.

The Epoch Times reports that upon contacting the police station on the horrific crime, the police spokesperson shamelessly defended the child rapists, claiming that the men had neither abducted nor sexually assaulted their victim.

“After the police investigation, there was neither abduction nor rape. Further details are not disclosed to protect the personality.”
The spokesperson admitted that the investigation was not yet complete, but that didn’t stop them from forming an official opinion on the alleged rapists and releasing them without charge.

“So, in plain German, a 13-year-old girl had consensual sex with three ‘southern’ men,” a family member said, sarcastically referring to the police’s failed handling of the case. “It is an outrage that these people are not being arrested or detained.”

Because of government-ordered media censorship and fear of revenge attacks from the perpetrators, the family remained silent. However, after it was clear that authorities were more worried about softening the crimes of migrants, especially Muslims, they relinquished their anonymity and began protesting against the destructive efforts of both the media and police.
The Gateway Pundit reports that the family put on a rally over the weekend, revealing the stomach-churning details of the girl’s sexual assault. Seeking to expose Germany’s leftist agenda, they even created a Facebook page, which was met with liberals’ criticism and bigotry, shamelessly accusing them of spewing “right-wing propaganda” to prevent asylum seekers from entering Europe.
As appalling as it is to think that those charged with defending and representing the people could act as victimizers who are more concerned with the image of a group that is widely perpetrating heinous crimes, this is exactly what’s happening in the West.
Mad World News recently reported that a German federal officer had come forward to reveal that Chancellor Angela Merkel was ordering police and media to downplay or even cover up crimes committed by refugees, migrants, and Muslims.

“Our domestic rule is — better to let him run away,” Officer Bernd K. said.

Bernd explained that if a refugee is violent, “superior orders” warn officers not to use any coercive action. Instead, offenders are either let go or charged with much less than what they’ve committed.
We are witnessing the progressive dystopia, a proverbial paradise of rape, supremacy, and persecution at the hands of the left’s favored minorities. If we decide to defend our culture, country, or children, we are racist bigots who must hate the offenders based on their skin color.
Because Islam is incompatible with Western law, i.e. do not rape, behead, or subjugate others to your religious compulsions, the leftist agenda is failing. For us, failure means Sharia complicity, misogyny, political oppression, and slavery. The fact that they are using the very tolerance and freedom we afford them to do this is further proof of their unalterable dedication to their religious and political ideology above all else.