A desperate move by Erdogan to stop Kurdish territorial gains

With peace negotiations to begin next week, and with almost no bargaining chips left to play with, Erdogan has decided to send Turkish forces into Syria. 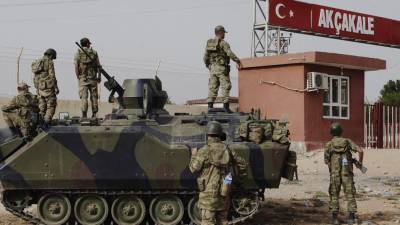 Turkey has seized the ISIS-controlled town of Jarabulus, but faced no resistance, according to reports:

Eyewitnesses to the incursion reported that the Turkish forces have not encountered any resistance from ISIS fighters in the area. These reports once again raise the question of possible collaboration between Turkey and ISIS aimed at halting the advance of the Kurdish militias in north Syria.


The fact that Turkey faced zero resistance is suspicious, but even more troubling is Erdogan's level of desperation. The Kurds are slowly retaking northern Syria from ISIS. For Turkey this is an unacceptable reality. As Patrick Cockburn wrote earlier this week, "Turkey is getting close to the point where it has to become militarily engaged in the war for northern Syria or become a marginal player."

Stratfor also predicted a Turkish incursion into Syria. Earlier this week Stratfor wrote, "In what could be a sign of this intent, Turkish minesweeping vehicleshave started clearing mines along a section of the border near the Syrian town of Jarabulus, which the Islamic State controls." 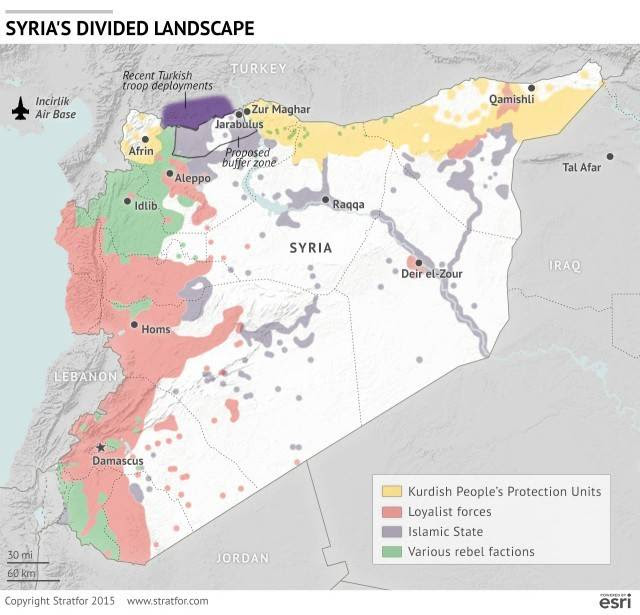 Turkish build-up on the Syrian border, as reported by Stratfor

But the big question now is: How will Russia respond? According to Stratfor, Russia has agreed not to interfere:

According to Stratfor sources, Russia and the United States have discussed the plan,and Russia has agreed not to obstruct Turkey's efforts so long as Ankara does not try to expand the buffer zone to the Mediterranean Sea — a stipulation Turkey has reportedly acquiesced to. Our sources also said liaison officers from Turkey, Russia and the United States will coordinate with one another to prevent cases of accidental fire or, in the event that they do occur, to avoid any escalation between Turkish and Russian forces. © Hosam Katan / Reuters
South Front,
21 January, 2016
The militants have increased their activity in Syria amid the much-anticipated talks between the Syrian government and different opposition groups scheduled to take place in Geneva on January 25.

“Unfortunately, in recent days, it’s especially noticeable that ahead of the planned start of the inter-Syrian negotiations in Geneva the activities of terrorist groups have intensified. Obviously, they’re trying to turn the tide in their favor on the battlefield,” Russian Foreign Ministry spokeswoman Maria Zakharova said during a briefing in Moscow on Jan.21.

The militants’s attempts to launch counter-attacks were performed by Al-Nusra Front and Ahrar ash-Sham groups, which “got serious reinforcements from Turkey.”
The increased activity of the terrorists was observed in several suburbs of Damascus, Homs and Idlib provinces of Syria, Zakharova noted.
Zakharova also said that Russia is concerned over the Turkey’s increased military incursions into Syria. Shea added that “it cannot be ruled out that… fortifications [built by Turkey] along the Syrian-Turkish border may be used by militant groups as strongholds.

“While all parties involved pin their hopes on the start of a meaningful and… inclusive dialogue between the Syrian government and the opposition, external forces continue to help militants in Syria, including terrorist groups, providing them with arms and ammunition,” the Russian official stressed.

According to Zakharova, the Syrian government has sent an official appeal to UN secretary-general and chairman of the UN Security Council over “repeated incursions of Turkish troops into Syrian border areas.”

US, IRAN STEP BACK FROM THE BRINK

To awaken Thursday to front-page photos of U.S. sailors kneeling on the deck of their patrol boat, hands on their heads in postures of surrender, on Iran’s Farsi Island, brought back old and bad memories. Originally appeared at UnzReview
South Front,
21 January, 2016
In January 1968, LBJ’s last year, 82 sailors of the Pueblo were captured by North Korea and held hostage with Captain Lloyd “Pete” Bucher, and abused and tortured for a year before release.
In the final 444 days of the Carter presidency, 52 Americans were held hostage in Tehran, and released only when Ronald Reagan raised his hand to take the oath.
In 2001, under George W. Bush, an EP-3 with 24 crew members was crashed by a Chinese fighter and forced to land on Hainan Island, where they were held for 11 days until we expressed “sorrow.”
Compared to these hostage-takings, the Farsi Island incident does not seem serious. Its resolution within hours by Secretary of State John Kerry and Foreign Minister Mohammad Javad Zarif suggests that Iran wants nothing to halt implementation, just days away, of the nuclear deal that will release $100 billion in frozen assets.
Facilitating the sailors’ release was a taped admission by one, identified as the “commander,” who called Iran’s treatment of the sailors “fantastic,” and said the intrusion into Iranian waters “was a mistake. That was our fault. And we apologize for our mistake.”
Still, what the reactions to this incident reveal is that not only is the United States dealing with a divided regime and nation in Iran, the U.S. is itself divided on what course to pursue with Iran.
“This administration’s craven desire to preserve the dangerous Iranian nuclear deal at all costs evidently knows no limits,” said John McCain. He castigated U.S. officials, presumably including Kerry, for “falling all over themselves to offer praise for Iran’s graciousness in detaining our ships and service members.
Marco Rubio, inflamed over the treatment of the sailors, pledged anew to kill the nuclear deal on his first day in office. But by then Iran will have complied with its terms and gotten its cash.
Iranian Revolutionary Guard Corps Navy Commander Ali Fadavi warned that “the USS Truman aircraft carrier showed unprofessional moves for 40 minutes after the detention of the trespassers.”
Fadavi added that Iran “was highly prepared with our coast-to-sea missiles” and “missile launching speedboats” to strike, had the U.S. warship taken action. Last fall, Iran tested two ballistic missiles in violation of U.N. Security Council resolutions, and a missile boat a mile from the Truman test-fired a rocket in the opposite direction.
There may be bluster and bluff in this. But if the RGC had fired at the Truman, that would have brought swift retaliation and a possible air, naval and missile war in the Persian Gulf.
Any prospective U.S. detente with Iran would be dead.
And, truth be told, some Americans, Saudis, Sunni Arabs and Israelis, who regard Iran as an existential threat, would relish seeing U.S. power unleashed against Iran.
So, too, many of the mullahs and Revolutionary Guard Corps might welcome a clash to abort the nuclear deal, restore the purity of their revolution, and rout the allies of President Hassan Rouhani in the February elections.
Indeed, assuming no clash in the next six weeks, the date to watch is Feb. 26, when elections are held for control of Iran’s 290-seat assembly.
A Guardian Council has power to disqualify candidates and it is likely that of the 12,000 who have filed, many will be purged for not supporting the principles of the Islamic Republic as required.
Yet, if President Rouhani, his prestige enhanced by the nuclear deal, to which all five U.N. Security Council members have signed on, and with billions being released to Iran, wins, a brighter day will begin.
And the world will await the reaction of the defeated hard-liners.
That same Feb. 26, elections are to be held for the 88-seat clerical Experts Assembly, which will choose the successor to Ayatollah Ali Khamenei, himself the successor, 25 years ago, to Ayatollah Ruhollah Khomeini, founding father of the revolution.
Rumors of Khamenei’s deteriorating health — he reportedly has suffered from stage 4 prostate cancer — could mean the Experts Assembly will be naming soon a new Supreme Leader of Iran.
The Feb. 26 elections could thus decide whether there is to be a cold peace between the United States and Iran, or a new war in the Middle East.
In the summer of 1914, the Great War came because, in the great capitals — Berlin, Vienna, Moscow, Paris, London — those who saw war as a disaster for civilization were outmaneuvered by more resolute men who saw war as the opportunity to smash hated rivals once and for all.
Anti-war Americans and Iranians won this one; they will have to win them all. The war parties, here and over there, need win only once.
Patrick J. Buchanan is the author of the new book “The Greatest Comeback: How Richard Nixon Rose From Defeat to Create the New Majority.”