We knew the weather this weekend would be wicked. A predicted extreme winter storm kicked into a much higher gear by an atmosphere warmed by human greenhouse gas emissions and by a record heat and moisture bleed coming off an anomalously hot Atlantic Ocean kind of wicked. A severe Blizzard featuring 12-40 inch snows, near record to record storm surges, and hurricane force wind gusts that has been showing up in model forecasts since earlier this week. And it appears that’s exactly what we’re getting.

By early Saturday morning, the reports were coming in. More than 1,500 vehicles were wrecked or disabled along Virgina State highways Friday evening as the storm roared across the region. Sudden, heavy snowfall generated a similar snarl — setting off a 40 mile long traffic jam in Kentucky which stranded motorists for more than 12 hours. According to reports from The Weather Channel, Jonas had already dumped as much as 28 inches of snow by 8 AM this morning. With 5-20 more inches on the way for many regions, these totals are expected to continue to climb.

These crippling snowfall totals were hitting very close to home in Gaithersburg, MD — where I took this video of still heavy snows over an already amazing 21 inch accumulation (unofficial).

The video was taken during a lull in an area that’s been experiencing accumulations at faster than 1 inch per hour rates since late last night. Sporadic reports of thundersnow were also starting to trickle in — especially in areas closer to the Chesapeake Bay like Baltimore

Along the coast, Jonas’s impacts began to look more like those of Superstorm Sandy than of a typical winter snowmaker. Winds on the Eastern Shore of Virginia hit a peak hurricane force gust of 85 miles per hour earlier this morning as Jonas gorged on record warm Atlantic Ocean waters and intensified. These strong winds combined with astronomical high tides and a climate change related pile up of Gulf Stream waters off the US East Coast to push tides to the second highest level on record for Delaware beaches.
According to the Weather Channel:

On Saturday morning, the water level at Lewes, Delaware, rose to 9.27 feet, a storm surge of more than 4 feet. This is the highest level on record at that gauge, beating 9.20 feet on March 6, 1962. Record flooding has also been observed in at least three New Jersey locations (Great Channel at Stone Harbor, Cape May Harbor, Delaware Bay at Cape May).

Cindy Nevitt in Cape May, New Jersey sent along this photo of ocean floodwaters and ice floes surging around her coastal home this morning as Jonas mercilessly drove its surge inland:

Reports are beginning to come in of ongoing emergency evacuations of coastal homes flooded by surging waters in this region. Given the 9 foot above normal tides combined with hurricane force wind gusts and 30 foot waves slamming into beaches, sand dunes and sea walls, it’s a situation that is, sadly, likely to worsen as the day progresses.
Many of the Worst Impacts Still to Come

To this point, it’s important to note that, with Jonas still centered off the Delmarva Peninsula, this major tidal flooding that regions are now currently experiencing is just the start. The head of water should continue to build on into late Saturday as it moves up the coastline and into New York City, Long Island, Coastal Connecticut, Rhode Island and Massachusetts. Furthermore, impacts to New Jersey and Delaware should remain dangerous or worsen over the coming hours as winds pile waves and waters on top of already record high tides.
Meanwhile, Jonas will continue to generate heavy snowfall over hundreds of miles on into Saturday evening. The situation, therefore, remains quite dangerous and all residents in the affected areas should keep tuned to local emergency officials for instruction. In other words, this climate change enhanced monster winter storm isn’t done yet. Not by a long shot.
Links:
A Blizzard Roars out of Climate Change’s Heart
National Weather Service
Winter Storm Jonas Bringing Peak Impacts to Mid-Atlantic and Northeast on Saturday
Winter Storm Jonas Live Updates
Jonas Generates 40 Mile Long Traffic Snarl in Kentucky
Cindy Nevitt
Hat Tip to DT Lange
Hat Tip to Colorado Bob
Hat Tip to Greg 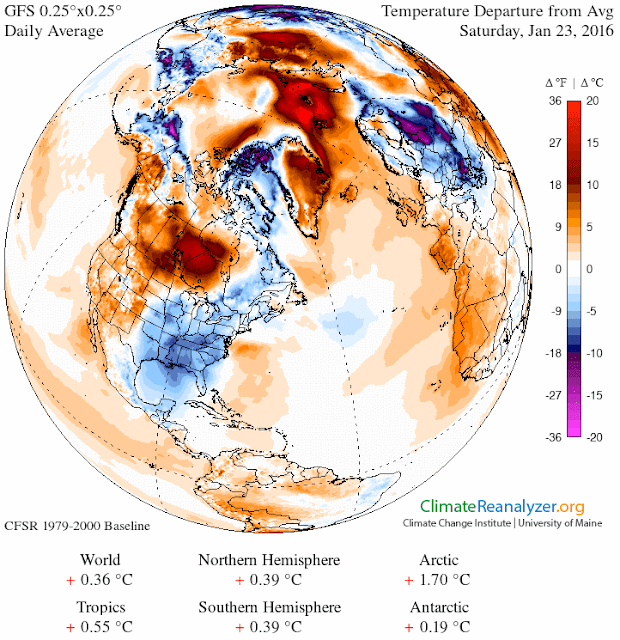