Protest against signing the TPPA is growing in New Zealand 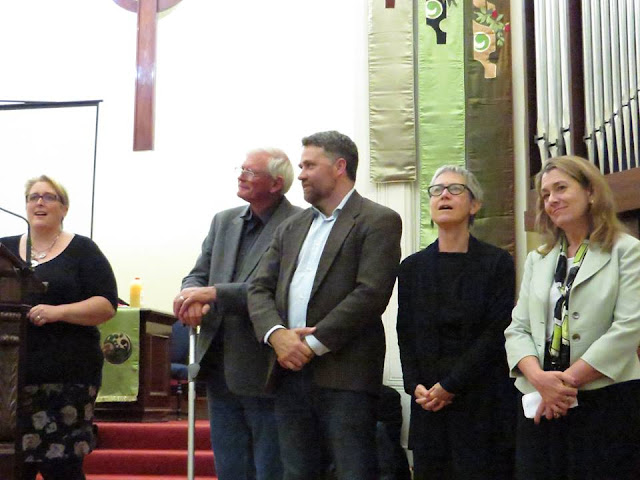 Last night I attended a public meeting where the two keynote speakers were Jane Kelsey from Auckland University and Lori Wallach of Global Trade Watch in the United States.

Apart from going through the main arguments as to the purported economic “beneftts” and how this will affect New Zealand's (other other signatories') sovereigny there were two points that were clear to me.

One was,with the determination of this government to sign the agreement and lock this country in the fate of the TPPA depends on what happens in other countries. There is consderable opposition to the Agreement in the United States from both Democrat and Republican sides, (despite the passing of Fast Track) – each for their own reasons as well as opposition in other countries.

For it to come into effect there has to be agreement from the United States plus Japan as well as one or two other players such as, perhaps Canada and Australia.

The position of the United States is the most important and that country's role as a blakmailer and bully. A trade agreement between South Korea and the US went into abeyance for several years for internal US considerations despite the Koreans having agreed. When the US came back to the negotiations they came with new DEMANDS despite the earlier agreement.

There is a lesson to be learned for countres such as New Zealand and other smaller players.

Below is a video of Jane Kelsey's preentation in Auckland the night before as well as media coveage of the event.


This is followed by some of the headlines from the last day or so.


Late last night info came in that the Sky City signing of the TPPA is being moved, if anyone can provide any further info into this that would be great, and also thought must share this info as many maybe traveling to the signing and is important destination is correct!!! 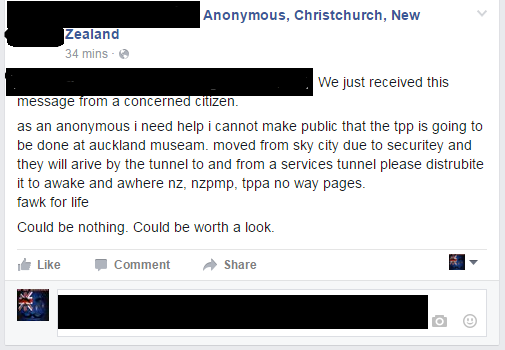 Don't rush into TPP, US critic 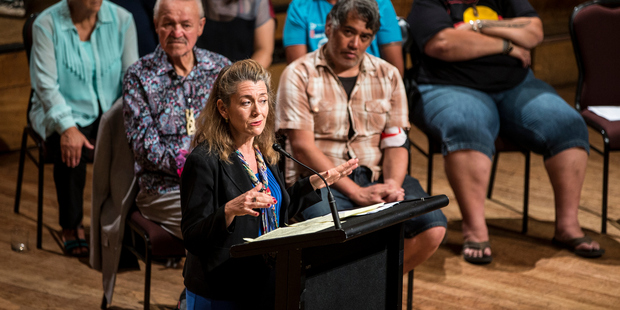 A leading American critic of the Trans Pacific Partnership, Lori Wallach, said New Zealand should not rush into the TPP because there were not the numbers to pass it in the United States Congress.
It was not a done deal and could yet become a "5000-page doorstop."
She could not understand why the New Zealand Government was pushing the deal so strongly as it was not a done deal.
READ MORE:  Analyst: Trans-Pacific Partnership 'unlikely to go ahead'

It had very little upside for New Zealand and enormous downsides, she told a meeting of about 1000 at the Auckland Town Hall tonight.
Yet New Zealand had been one of the most enthusiastic.
"So I thought it was really important to dig out of the snow and come and say 'guys this is far from a done deal and your Government is trying to run you guys towards a cliff.
"This is no done deal - this is likely to be an undone deal. "
New Zealand might change its laws to meet the terms of an agreement that might never get finished.
"And you'll have screwed yourselves over by passing that law," she said.
"So for God's sake don't go rushing into this because in all likelihood it ain't going to happen."
Lori Wallach is the director of the Washington-based Public Citizen Global Trade Watch Group and tonight began a speaking tour with Auckland University law professor Jane Kelsey against the TPP.

She suggested that discontent in the United States on issues such as the period of exclusivity for biologic drugs or barring tobacco companies from investor-state dispute settlement could be changed in side-letters between the US and other countries.
That was how binding changes could be made to an agreement without opening up the text for renegotiation.
She also said the investor-dispute settlement (ISDS) rules were an enormous risk.
She disputed the New Zealand Government's claim that ISDS - allowing disputes to be settled by private tribunal - would not attract cases.
While the US has had 50 agreements with ISDS and had had hardly any challenges over 50 years, there were now more than 50 a year. And under TPP - an agreement of 12 countries - it would double its exposure with 9500 new corporations from TPP countries being a possible new threat.
And while New Zealand had had no ISDS cases taken against it, it could face exposure to 1608 United States companies - and the US was the most litigious country in the world.
"This is brand new liability. So when your Government says 'we've never been sued,' I say 'hold on to your wallet and your tax dollars because if TPPA happens, it is just a matter of time."


Jane Kelsey, New Zealand's leading campaigner against TPP over the five years it was negotiated, took her place at the lectern with a stuffed toy - a "dead rat" she has called Tim, after former Trade Minister Tim Groser has talked of New Zealand having to swallow dead rats.
She said the national interest analysis on the TPP released today by the Government was "devoid of any independent insight" because it was drafted by the officials who negotiated the agreement.
"It is nothing more than a propaganda exercise," she said.
She said the $2.7 billion estimated increase in gdp by 2030 would be, on current growth rates, a mere 0.9 per cent of gdp in 2030.
Next Thursday the Trade Minister of the TPP countries would sign the deal - but that was the end of it.
The national interest assessment would be presented to the House and legislation drafted - but it could not come into force for at least two years.
"We need to make our voices heard from that for at least the next two years."
Politicians from Labour, the Greens, New Zealand First and the Maori Party spoke as well.


Labour finance spokesman Grant Robertson the Government had undertaken a "secretive, exclusory, unaccountable process driven by the galactic ego and arrogance of Tim Groser."
He quoted from the national interest analysis the sentence he said identified the source of Labour's objection.
"The agreement places new limitations on Government's ability to modify New Zealand's policy settings to ensure they are appropriate for our domestic circumstances."
"That is the nub of the problem here," he said. It undermined sovereign rights.
It could, for example, prevent a Government legislation to get proper public broadcasting.
He said the agreement undermined New Zealand's sovereignty and while there were modest economic benefits from TPP "you cannot put a price on our democratic and constitutional freedoms to make our own law."

Greens' co-leader Metiria Turei said the point of the TPP was "to take power away from democratically elected Government, to give it to multinational corporations" and where their interests clashed with the interests of New Zealand, the investors interests would come out on top. "It's not about trade; it's about power."

Maori Party co-leader Marama Fox said the issue had been unifying because now people might understand how Maori felt to have lost their sovereign rights.
"We have been fighting this fight for 175 years."
The party objected to the Government having the power in the TPP to interpret what rights were under the Treaty of Waitangi.
There had been an irrational fear in New Zealand that if you give Maori more rights it would take away others' rights, or that Maori "might do to us what we have done to them."
"That is wrong. We want to live in a country where we recognise our duality of nationhood, that we are here as partners."

New Zealand First's Fletcher Tabuteau claimed that New Zealand First had been the most vocal against the TPP and the most consistent.
He said ISDS would give multi-national corporates an unfair advantage over New Zealand companies in New Zealand because only they would have access to ISDS.
He suggested that minimum wage measures or environmental laws passed by the Government could trigger the ISDS and let overseas companies sue the Government but New Zealand companies would have to "like it and lump it."
"It will undermine New Zealand business into the future."
He said National still had the numbers to approve the national interest analysis but opponents of the TPP needed to talk to National MPs.
"Some of those National MPs must fold under your pressure." 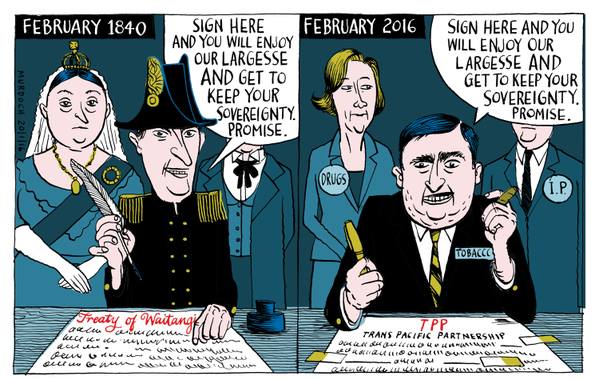 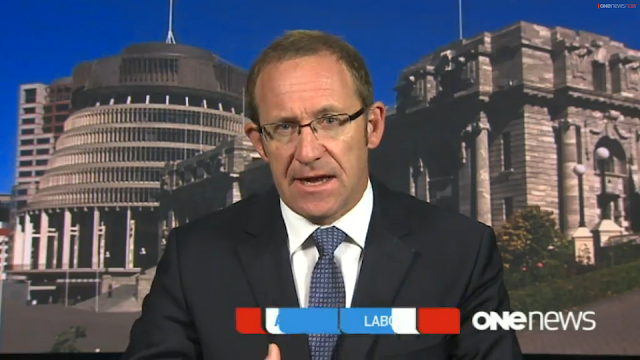 
http://www.scoop.co.nz/stories/PA1601/S00109/tpp-analysis-confirms-sovereignty-at-stake.htm
The release of old and outdated information about the Trans Pacific Partnership will disappoint the many New Zealanders who want transparency around this controversial deal, Opposition Leader Andrew Little says.
“The National Impact Analysis made public today is nothing new.
“It merely reinforces the marginal gains New Zealand will make – less than 1 per cent of GDP by 2030.
“This is a small economic gain and at the same time our sovereignty is being compromised.
“This analysis confirms the Trans Pacific Partnership will prevent future governments making laws in the interest of New Zealand.
“The public is still in the dark over what this deal means for Pharmac and the future cost of medicines.
“Labour has been behind some of New Zealand’s most successful genuine free trade agreements but this goes far beyond just trade.
“National knows many Kiwis people are opposed to this deal. That is why – despite saying last week they wouldn’t release further details – they have panicked and rushed out this tired old spin,” Andrew Little says. 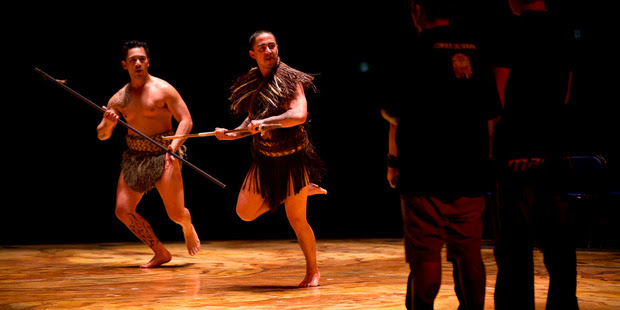 Piripi Davis (L), chairman of the tribe's Orakei trust board, said its "strong opposition" to the TPP meant it would not participate in welcoming ceremonies. Photo / Dean Purcell
NZ Herald,
28 January, 2015

Ngati Whatua says it will refuse to take part in any powhiri for international trade ministers when they visit New Zealand to sign the Trans-Pacific Partnership on February 4 because it opposes the agreement.
Piripi Davis, chairman of the tribe's Orakei trust board, said its "strong opposition" to the TPP meant it would not participate in welcoming ceremonies when ministers from the 12 TPP countries gather in Auckland for the signing.
A spokeswoman said the iwi had not yet been asked if it would take part in the powhiri, but in the past it had done so for visiting dignitaries as it had mana whenua status in central Auckland.
It was letting the Government know ahead of time that it would not take part.
Mr Davis said the iwi had supported New Zealand's bid to win a seat on the United Nations Security Council.
"We hosted dozens of UN ambassadors on our marae and welcomed them in a joyous occasion where they could experience our culture.
"We supported that Government initiative because it was building relationships between peoples and nations.
"We cannot support or agree with this particular issue because, in our view, the TPPA will harm not only our people but also New Zealand and its people overall."
Mr Davis said there had been a lot of anger and mistrust voiced about the TPP, and he agreed. The iwi's stance was also out of concern about the commercialisation of traditional uses of indigenous flora and fauna.
The Ministry of Foreign Affairs and Trade could not immediately say whether it already has a group arranged for the powhiri.
Ngati Whatua's stance follows calls from Ngapuhi elder Kingi Taurua for his tribe to refuse to welcome the Government onto Te Tii Marae at Waitangi on February 5 if the National-led Administration goes ahead with the signing.
Ngapuhi is due to hold a hui on February 2 to make a final decision.
Prime Minister John Key has said he intends to travel to Waitangi, but will not "gatecrash" the lower marae if he is not welcome