Nightmare Storm for US East Coast

Going, going...gone are the days (such as at the time of super storm Sandy) that I could devote time and energy to chronicling the details of extreme weather events. They are simply too frequent and there are so many other things that demand my energy, so this report from Robertscribbler will suffice for now

There’s a historic blizzard in the form of Winter Storm Jonas setting its sights on the US East Coast. The storm is slowly coming together Thursday evening and now appears to be set to paralyze a 1,000 mile swath under 1 to 2.5 feet of snow even as it hurls a substantial storm surge and 40-60 mph winds at waterfront cities from Norfolk to Boston. A monster storm whose predicted formation has made headlines since Tuesday. But what you won’t hear most major news sources mention is the likelihood that this gathering storm has been dramatically impacted by a number of new climate features related to a human-forced warming of the globe.

A Warming Arctic Shoves the Cold Air Out

To understand how climate change helped make Jonas so extreme, it’s best if we start our tale in the Arctic. For if we could mark an area on the Earth’s surface that is at the very heart of impacts for human-caused climate change it would be in that zone of the far north above the 66th parallel. It is there that we see the most dramatic, most rapid changes — to ice, to weather, to the thawing lands, to life itself. But unlike what might be said of an American city made famous by its penchant for sin — what happens in the Arctic doesn’t stay in the Arctic.
This is especially true when it comes to weather. If the Arctic cools, it influences the Jet Stream, strengthens the storm track and shuts more cold air away in the Arctic. But if the Arctic warms, as it has more and more frequently during recent years, then the flood-gates open and cold, Arctic air pours outward — filling the deep, inevitable dips in the Jet Stream that then develop.

And it is a massive accumulation of Arctic heat over the past few weeks that has forced Arctic temperatures, in places, to rocket to above 36 degrees Fahrenheit (20 degrees C) warmer than average. A heating up of the entire region to 2-3 degrees Celsius warmer than the already warmer than average 1979- 2000 baseline. An Arctic warm-up that muscled out a howling torrent of cold air that then raged on into a deep trough in the Jet Stream now forming over the eastern half of the United States.

(An Arctic that is, on average 2.02 C hotter than normal on Friday joins with a high amplitude wave in the Jet Stream and together drives a massive flood of cold air into eastern parts of the US on Friday. Cold air slamming head on into unprecedented heat and moisture bleeding of the Atlantic Ocean to form the historic weather event that is now in the pipe. Image source: Climate Reanalyzer.)

In weather parlance, a trough, or a big dip in the Jet Stream is a storm generation zone. The reason has to do with the nature of how extreme differences in temperature and moisture can provide fuel for strong storms. It’s this very temperature differential that sits as the cornerstone of our current understanding of how extreme storms are fueled in terms of Convective Available Potential Energy (CAPE).

In the one case, cold air can’t hold as much water in suspension as warm air. So a big flood of cold air can often fuel major precipitation events when coming into collision with hot, moisture-laden air. As hot and cold air are sandwiched closer together, winds — at both the upper and lower levels — tend to increase in velocity. The higher the difference in temperature, the stronger the winds. When these winds run along a big dip in the Jet Stream — like the one now racing over the US East Coast — they can spin off twists and vortexes that can rapidly develop into powerful low pressure systems.
The lows then feed on the difference in temperatures between the two sides of the dividing air-mass — cold on the one side, and hot, wet on the other. The bigger the differential, the more heat and moisture on one side, and the more cold on the other side, the more potential that such low pressure centers will develop into monster storms. The more potential that the storms will develop these crazy atmospheric sandwiches of hot and cold air that really crank out the extreme weather.

(“Tremendous Vertical Motion.” Anthony Sagliani tweets about extreme CAPE for a blizzard zeroing in on the US East Coast. What’s important to mention is that human-forced climate change has CAPE written all over it. Image source: Anthony Sagliani.)

In terms of the current storm, some of the CAPE potentials coming in are just off the charts. The above graphic, posted in this recent tweet by Anthony Sagliani, identifies the potential for 5 inch per hour thundersnow at Dulles International Airport (AID) between 2 AM and 2 PM Saturday. To be very clear, a 1 inch per hour snowfall was once considered an extreme event. Now we are looking at possibly 5!

A Record Hot Atlantic Feeds it All

In the context of human-driven climate change, this is one of the reasons why our warming up of the world can generate extreme weather. It warms the Earth unevenly. It puts cold next to hot by driving cold out of the polar zones and by warming up huge areas of land and ocean. And it dumps more moisture into the atmosphere through an amplified evaporation from these greatly warmed Earth surfaces. Mix it all together and you get Anthony Sagliani’s ‘tremendous vertical motion.’
How does this work? In two words — latent heat. More specifically the convective heat energy available in water vapor. And where does most of that latent heat energy come from? It comes, for the most part, in the form of warm waters evaporating into the air above the world’s oceans. More specifically to our current storm it comes in the form of record warm to near record warm temperatures in the waters of the Gulf Stream off the US East Coast (See Dr Jeff Master’s ‘The Future of Intense Winter Storms”).

(Sea surface temperatures off the US East Coast are more comparable to those seen during Summer than what would be typical for January. A 76 degree sea surface off Norfolk will provide a massive amount of heat and moisture to fuel the new kind of storm that is Jonas. Image source: Earth Nullschool.)

As Dr. Michael Mann noted in a tweet earlier this week, sea surface temperatures off the US East Coast are extraordinarily warm for this time of year. And Bill McKibben was absolutely astute in saying that these near record temperatures “should turbo-charge this weekend’s blizzard.”

And they’re absolutely ridiculously warm — in the range of 76 degrees Fahrenheit in a region about 150 miles due east of Norfolk, Virginia. A region of ocean over which the developing storm center will directly cross. An area of water that is now in the range of 7 degrees Celsius above average (13 degrees Fahrenheit). For the ocean surface, this is screaming hot — more typical to summer than anything one would expect to see in January, even in the Gulf Stream.
You just don’t see these kinds of temperature departures for the ocean — or at least you didn’t before human-caused climate change started to ramp up. But now we have them — an ocean surface hot enough to support a hurricane but one that will this weekend provide fuel for a blizzard. So the kind of blizzard we will have will not at all be like even the usual blizzards of the 20th Century. This is the new, worse variety that will sadly become more frequent. Destructive, heavy snowfall in the 4-5 inches per hour range, thundersnow and storm surges combined, swaths of hundreds of miles impacted and crippled. The kind for the new age of a human-heated atmosphere — destabilized to produce freak storms of a ferocity and frequency the likes of which we have never seen.
UPDATE — Snowfall Begins With Some Models Showing 4 Feet or More Possible (Average Guidance For Gaithersburg is 24-30 Inches)

Moderate snowfall began at 1:35 PM on Friday in my hometown of Gaithersburg, MD. Model guidance for our area is in the range of 24-30 inches, with as much as 4 feet coming up in some of the GFS ensembles.
Will be posting videos and related updates every 2-3 hours as conditions change.
UPDATE: 1-2 Inches on the Ground at Gaithersburg, MD as of 3:42 PM

Wind and rates of snowfall have picked up somewhat over the past two hours. As of 3:42 PM, about 1-2 inches had fallen and the wind was visibly swaying some of the tree branches outside. Reports are coming in from regions to the south of a very heavy band of snow that should arrive in our area by later this evening.
Radar captures by the National Weather Service indicate this band setting up over much of Central and Eastern North Carolina — stretching northward through just west of Richmond. GFS model tracking and satellite confirmation indicate a coastal low developing in the region of Northern South Carolina. This low is beginning to transfer Atlantic moisture into the storm — pulling strong winds off that abnormally warm region of ocean just east of Norfolk and into the developing powerful snowfall and.

Here is live coverage from the Guardian 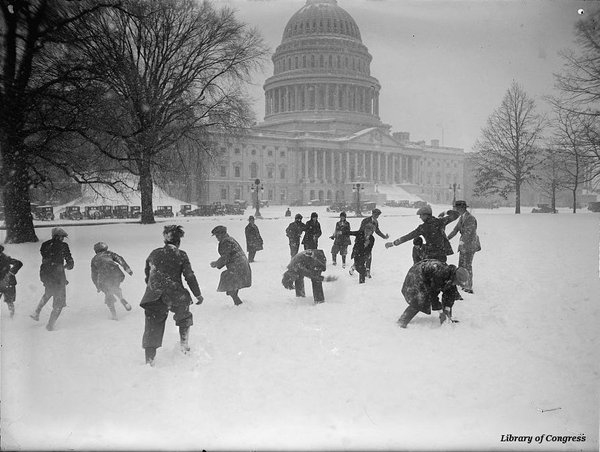 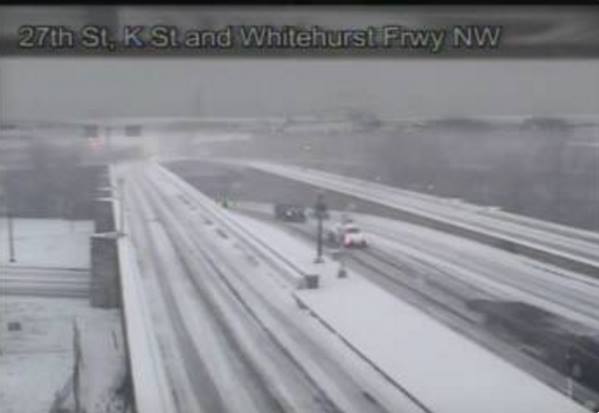