US determined to 'draw Russia into conflict': Analyst

The United States is determined to lead Russia toward an escalation of tensions, putting the whole world at risk of a major military conflict, says an American professor and political commentator. 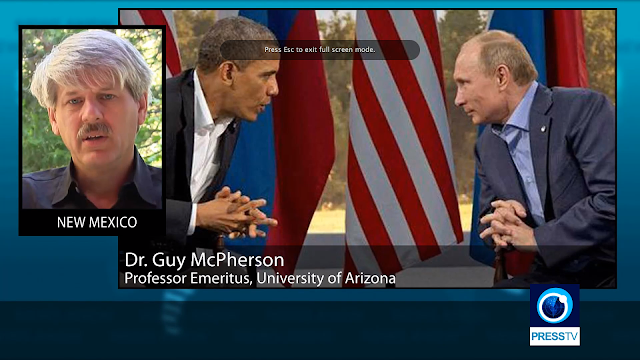 
“It’s pretty evident that Washington is doing everything it can to draw Russia into a much larger-scale military event than Russia is willing to be pulled into,” Dr. Guy McPherson said in an interview with Press TV on Wednesday.

He said that only Russian President Vladimir Putin’s “restraint has prevented a major escalation of military conflict.”

A group of scientists, policy experts, and former officials have warned that the world is much closer to destruction than it was at the height of the US-Russia rivalry during the Cold War.

The Bulletin of the Atomic Scientists on Tuesday unveiled the latest version of the metaphorical "Doomsday Clock" -- created in 1947 to reflect the likelihood of a global cataclysm arising from military conflicts, nuclear weapons, climate change and new technologies.

The symbolic clock remained unchanged this year-- at three minutes to midnight, the Bulletin announced. Midnight represents an apocalyptic disaster and end of humanity.

In 1991, when the threat of a nuclear catastrophe dissipated with the end of the Cold War, the clock stood at 17 minutes to midnight. It has been adjusted 18 times since its inception.

McPherson, professor emeritus of natural resources, ecology, and evolutionary biology at the University of Arizona, said he anticipated that “they would move it ahead a minute or two” this year.

“The evidence with respect to abrupt climate change is much clearer than it was last year. In addition, the regional military conflict in and around Ukraine is really on the verge of going global,” the analyst explained.

“So between a nuclear Armageddon on the horizon… and the increased evidence for abrupt climate change that has arisen, I’m surprised that the Bulletin has kept the Doomsday Clock at three minutes to midnight,” he reiterated.

The Bulletin said the US-Russia tensions, conflicts in Syria and Ukraine, a recent nuclear test by North Korea as well as nuclear modernization by the US and others, have offset the positive achievements of the past year, namely the Iran nuclear accord and the Paris climate agreement.

Relations between the United States and Russia are at their lowest point since the end of the Cold War, largely due to the crisis in eastern Ukraine and Russia’s air campaign in Syria.


Listen to the interview HERE
Posted by seemorerocks at 09:56