'Crunchy,' occasionally yellow tap water plagues district
Tap water in parts of North Canterbury has been described as "crunchy" and has reportedly caused plants to die and people's hair to all out SUPPLIED
Bottled water compared to water from a tap in North Canterbury, shortly after it was turned on after a fault.


Affected residents say the odour and taste of the water makes it undrinkable, and it has been anecdotally linked to diarrhoea, stomach pain and rashes, particularly in children.
The majority of the Hurunui's 12,000 residents live with tap water connected to supplies given an "E" grade by the Ministry of Health. 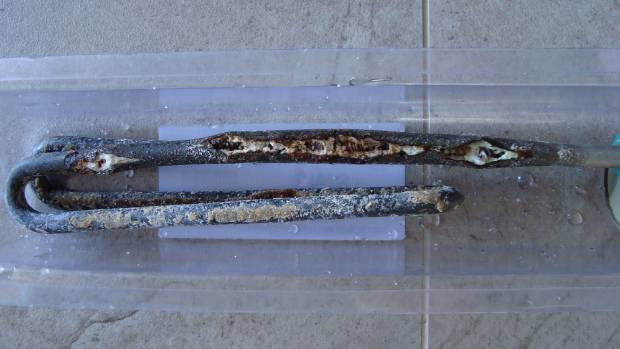 SUPPLIED
An element from Colleen Fletcher's hot water cylinder. It was designed for "hard" water, but still only lasted three months.
It is the lowest grade possible and represents an "unacceptable level of risk", according to the Ministry.
In the last analysis conducted in 2014, supplies for Cheviot, Amberley, Waiau and Waipara all recorded excessive E.coli levels and failed protozoa tests – placing them in the bottom 3 per cent of supplies nationwide.
Seven rural water schemes in the district are on a permanent boil notice. SUPPLIED
Maddison Johnson, 6, with a blown element from her family's hot water cylinder.

The district council says it is more of a "nuisance" than a health issue.


Canterbury Medical Officer of Health Dr Ramon Pink said there had been a small number of gastro illnesses reported in Hurunui in the last 12 months, but none had been directly attributed to the water supply.
He said there were known issues with hardness and iron in some of the supplies, but they should not cause illness. 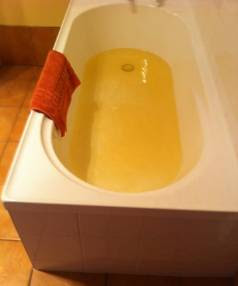 SUPPLIED
Water has a yellowish tinge, and some believe it isn't even safe to bathe in.
When Amberley resident Anna McBreen fills a bath, the water is a rusty brown; it complements her orange-stained bathroom.

She cannot drink the water, which has a texture she described as "creamy," and said its corrosiveness had caused harsh rust stains to cover all surfaces of her bathroom.

It had also caused her dyed hair to fall out due to high-iron levels, an unusual effect McBreen said afflicted other women in town. "It's just disgusting. It has destroyed the washing machine, I've been through jugs and irons . . . you can't drink the water, it stinks. It smells like sulfur."

"You drink it, and it's creamy. People come to your house and go 'yuck, what's wrong with your water?' "
Her family drinks bottled water and does not use the bath. She had made numerous complaints to the council but was told the issue was not widespread.
"It wears you down a wee bit. People must come to your house and think you're disgusting . . . why should we pay rates for such sub-standard water?"
The issue is two-pronged: iron levels of the water have fluctuated since the quakes, which causes the occasional yellowish hue and the "crunchy" texture.
High levels of water "hardness" (referring to excess levels of calcium carbonate) in some areas have corroded washing machines, filtration systems, and elements.
Leithfield resident Colleen Fletcher started a Facebook group to discuss water issues in the district and was surprised by the extent of the problem.
Her group has more than 200 members, with many sharing stories about blown elements and unusual health effects derived from drinking the water.
"When our first element blew, it was a little bit of a shock. We then put in an element designed to cope with hard water, and it lasted three months," she said.
Her family often felt ill after drinking the water, which was sometimes yellow and had a foul taste due to the high iron levels.
"It can give you a wee bit of a fright."
Resident Jenny Bryce was considering a petition to press the council on the issue.
She had to stop watering her plants using the council-supply as they were starting to die, and she said she once turned on the tap to find the water was purple.
The council has offered to meet with residents to discuss their water issues.
Council infrastructure manager David Edge said the council regularly tested the water for anything harmful to human health.
He said several water supplies had high iron levels following the quakes, but because the human body could process iron well, it was more of a "nuisance" than a health issue.
"It is highly unlikely that the sickness reported is related to the drinking water supplied, as this would be immediately followed up through the Canterbury District Health Board if considered as a threat to the public's health at large."
The council has until 2025 to meet national drinking water standards, which it said could cost up to $14 million, as most of its water supplies do not meet the standard.
It had previously told the Ministry of Health the standards were unfair, as much of the district's water was consumed by animals.